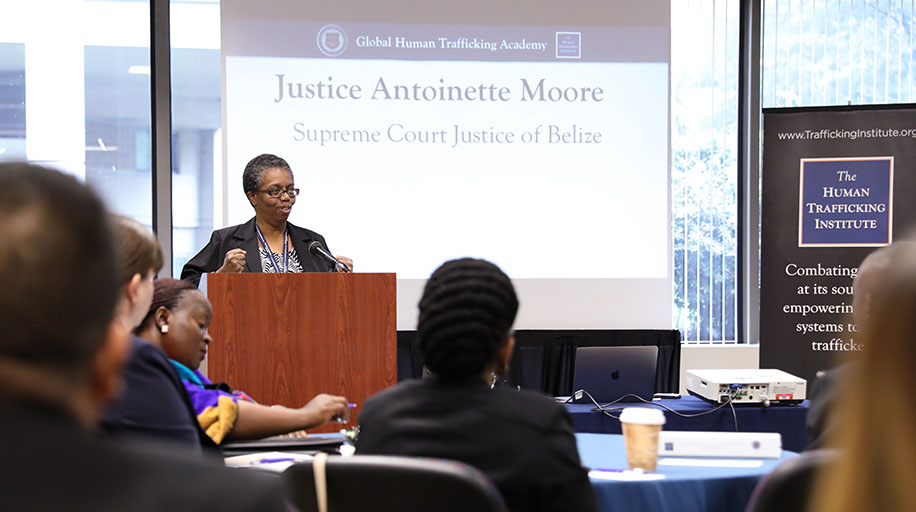 A specialized cohort of prosecutors, law enforcement officers, and social workers from Belize, South Africa, and Uganda convened on October 15, outside Washington, D.C., for the first-ever Global Human Trafficking Academy.

The Academy, hosted and conducted by The Human Trafficking Institute, is a unique opportunity to accelerate a country’s progress toward combatting the crime of human trafficking. Twenty-three professionals from specialized investigative units, prosecutors’ offices, and social workers are participating in this two-week, intensive program where they will learn cutting-edge strategies for handling human trafficking cases.

Belize Supreme Court Justice Antoinette Moore shared opening remarks focusing on the transformative impact of specialized education and learning have not only on the individual but entire societies.

“Knowledge is power, meaning these two weeks will make you more powerful,” Moore said. “Hopefully, you’ll take that power and empower others, and contribute in your community to ultimately defeat human trafficking. We have seen the ending of chattel slavery, we have gained independence in our countries, we have seen the end of apartheid in South Africa. Exercise your power for good. Think about the fact that consistent small, everyday changes matter. We are the people to make the small every day, consistent changes. A change in your perspective will matter, your application of law will matter, how you treat the next person who needs your services will matter. You have the power to do your jobs, and you will be further empowered to do your jobs, to teach your co-workers, and empowers survivors. Each and every one of you can change the future for Belize, Uganda, and South Africa, and I might be ambitious in saying this, but the world.”

“The moment traffickers realize there is a team like you that could come in and send them to jail, they will look for other options,” Boutros said. “With consistency over time to deliver the promise of the law, you will be the global examples of countries who are taking the lead, moving upstream, and stopping traffickers. This is a solvable problem. Belize, South Africa, and Uganda you are on the cusp of an important global opportunity.”

The Academy features a two-week interactive and simulation-based learning experience using a fact pattern created by Tanima Kishore, the Institute’s Special Counsel in Uganda, and Dave Fillingame, the Institute’s Special Counsel in Belize. This simulation places the cohorts in the fictional country of Belmopala, in which they will collect evidence, build a case, and participate in a mock trial at the end of the Academy. In addition to the simulation, the cohorts will hear from subject matter experts on a variety of topics including case identification, referral mechanisms, principles of victim interviewing, and corroboration, among others, in order to build their skill set in prosecuting a human trafficking case.

The Academy is part of the Institute’s theory of change in which members of a specialized units attend an intensive Academy to get the core knowledge they need to decimate trafficking, including how to identify trafficking cases, use trauma-informed interviewing techniques, and develop trial strategies.