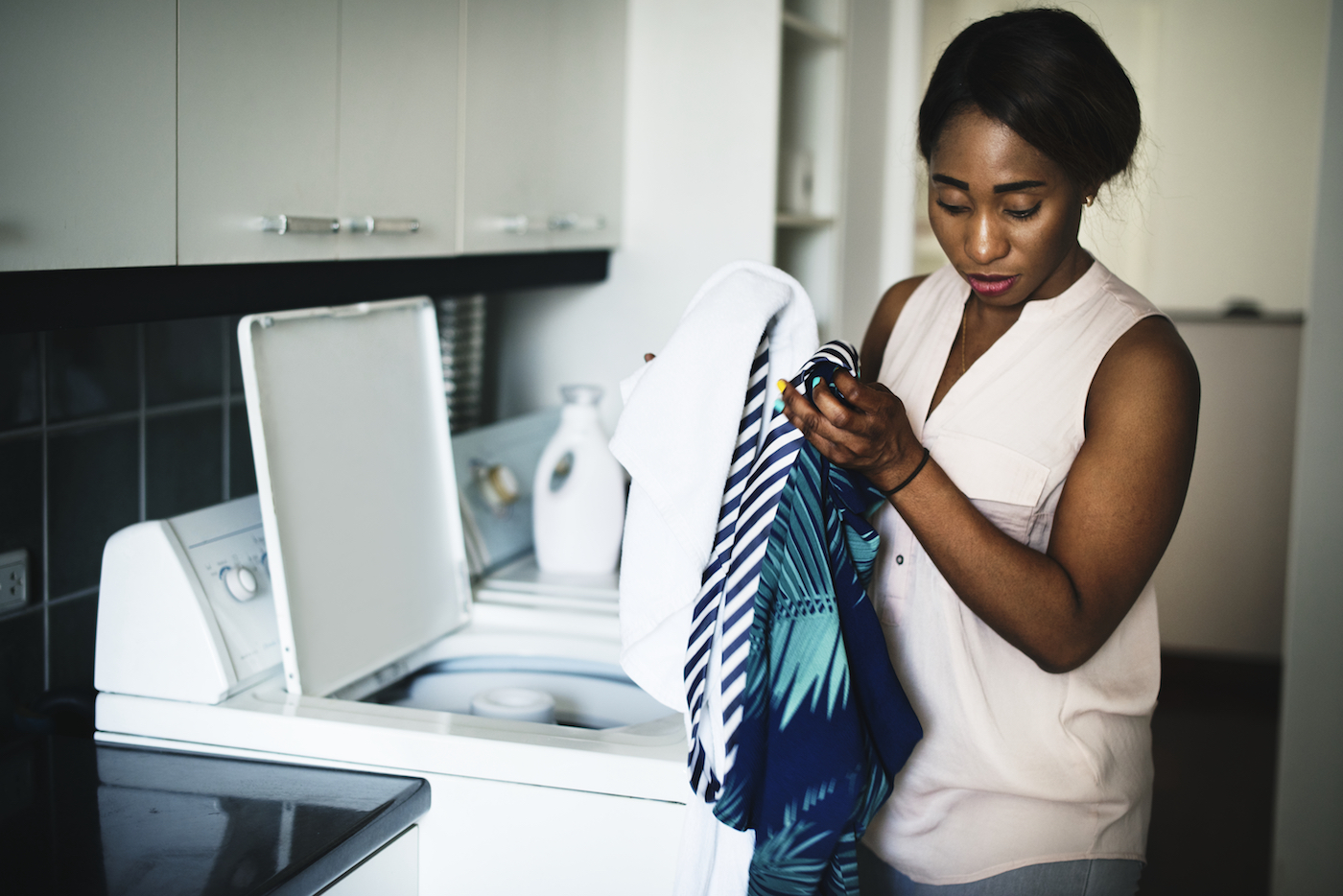 More than two million people go to work each day to make sure the homes of others function across the United States.1 They work as nannies, cleaners, and caregivers for loved ones.2 Their services are not luxuries; rather, they are vital underpinnings to the United States’ economy. The dollar value of domestic workers to this country goes far beyond the wages of the workers themselves. For example, whereas traditionally one parent—usually the mother—cared for children and the home without pay, today, thanks to domestic workers, there is an increasing number of two-income households.3 Domestic workers also make it possible for adults with sick or aging relatives to remain employed while their loved ones are cared for. Given their importance, one might assume domestic workers have legal protections specific to their needs. In reality, domestic workers are left out of even the most basic labor laws in the United States4. As a result, domestic workers—mostly women and immigrants5,6—find themselves vulnerable to labor exploitation and labor trafficking. Far from the public eye, these workers often end up just beyond the protection of the law.

The report features findings from a survey of 2,086 nannies, caregivers, and house cleaners across 14 U.S. metropolitan areas.7 Below are some of the survey’s top-line findings.

The report found domestic workers are mostly recruited through informal means. In fact, 67% of the survey participants reported not having a written contract with their employer. Among all survey participants (including the 8% with a contract), 24% reported being assigned tasks beyond their job description. Of that population, 35% reported working long hours (more than 40 hours a week) often without breaks. With these extended work hours and assignments, many domestic workers found their actual wages fall below minimum wage.

Domestic workers are often in a power-imbalance situation that constrains their ability to self-advocate. Of the 8% of domestic workers who reported having a written contract, 30% reported their employers violated their contracts. In fact, 74% of all workers surveyed reported feeling as if they couldn’t decline additional work. The simple existence of a contract does not necessarily provide enough protection for workers. Therefore, it is important that employers of domestic workers have incentives to comply with written contracts. Furthermore, these incentives should compel employers without requiring any intervention from their employees. 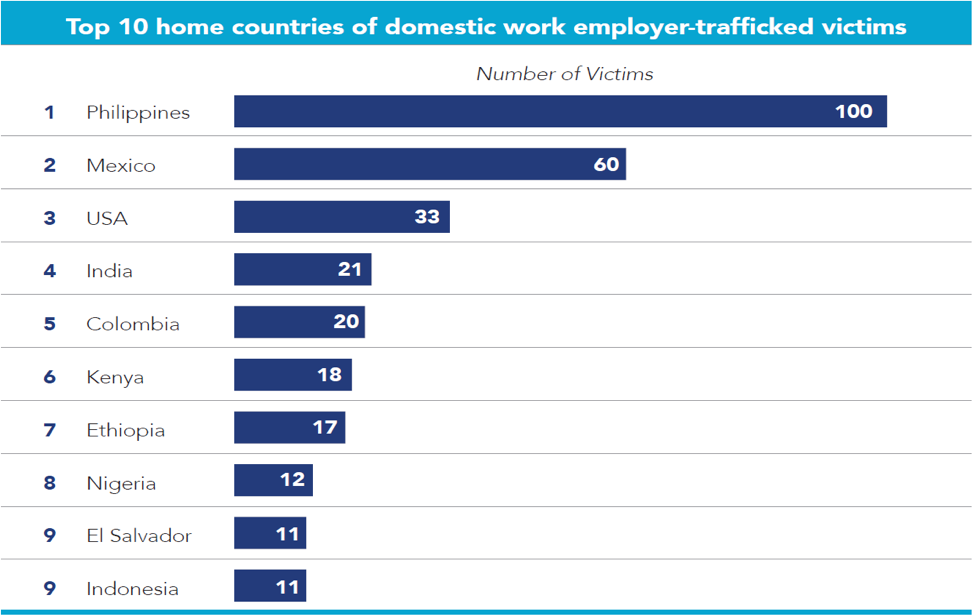 Immigration and the Trafficking of Domestic Workers

The domestic worker workforce, both globally and in the United States, is largely comprised of migrants. However, of victims of employer-traffickers who reported their immigration status, only 19% were undocumented. Meaning, 81% came to the United States legally under the auspices of non-immigrant visas. This, however, does not prevent them from becoming trafficking victims.

B-1, A, & G Visas – Domestic workers in the B-1, A, and G visa categories9 receive a “Know Your Rights10” pamphlet, which includes information on what is and is not acceptable in the U.S. labor market. The pamphlet, while extremely valuable, puts the sole responsibility for preventing labor exploitation on the domestic worker. This creates an employer-employee power imbalance. Furthermore, domestic workers in some visa categories do not have visa portability. Their immigration status is tied to the employer on their visa application. As a result, workers are disincentivized to leave their trafficking situation for fear of losing their legal immigration status.

J-1 Visa – The J-1 visa allows foreign students to perform au pair services for their sponsors under a cultural exchange program. The program lacks adequate oversight as a temporary work program and participants are subject to labor exploitation (some participants recently won a class-action lawsuit) and labor trafficking.

F-1 Visa – In other cases, domestic workers may enter the country with a visa, which authorizes them to work but only under certain conditions. For instance, F-1 students are permitted to engage in training-related employment; however, their authorization is not for domestic work employment. As such, they do not receive domestic work-specific information, such as the “Know Your Rights” pamphlet from immigration authorities and may be unaware of their vulnerability to trafficking.

The National Hotline collects data on factors that make victims vulnerable to trafficking along with recruitment tactics used by traffickers to entice their victims. With this information, the government, corporations, non-profits, community members, and other stakeholders may develop strategic responses to reduce the vulnerabilities of victims and disrupt the recruitment practices of traffickers. Bear in mind, victims may have more than one risk factor, so these numbers are non-cumulative. 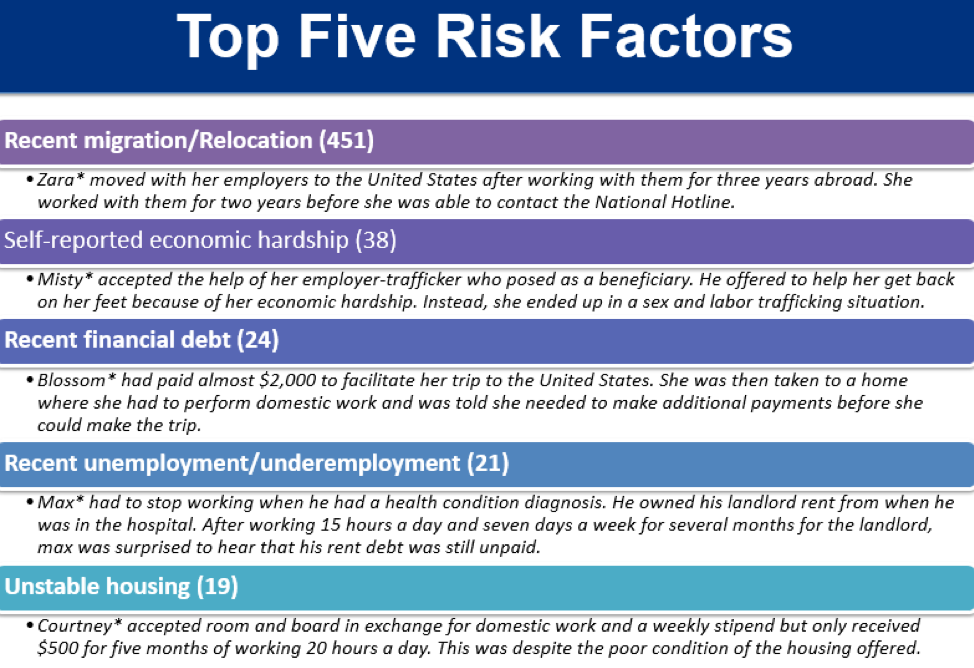 Outsiders often ask (whether externally or internally) a similar question for victims of labor trafficking—“why not leave?” The answer is the essence of the crime of trafficking. Traffickers use carefully honed and extremely effective methods of control to keep victims working and compliant. Traffickers may use more than one method of control for a victim; thus, these records are non-cumulative. 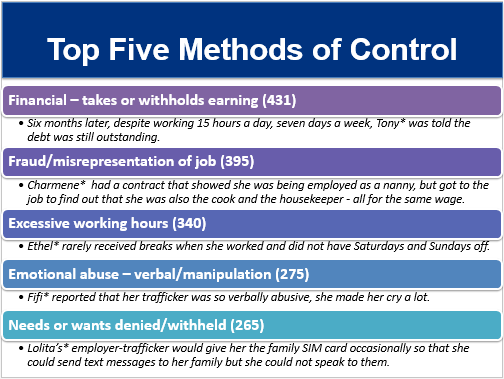 There are multiple factors that play a role in making domestic workers particularly vulnerable to certain kinds of employment abuse, exploitation, and labor trafficking. Domestic work, by its very definition, takes place in homes where traffickers can expect privacy. Domestic workers rarely have colleagues who share their day-to-day experiences and can corroborate reports of abuse. Nor are there code inspectors or similarly situated government officials who are responsible for ensuring the workplace is adhering to health, safety, and licensing regulations. Additionally, many domestic workers live in the houses of their employers. This creates an environment in which the worker may be isolated and have few opportunities to reach out for help. Key factors enabling the trafficking of domestic workers are listed below. 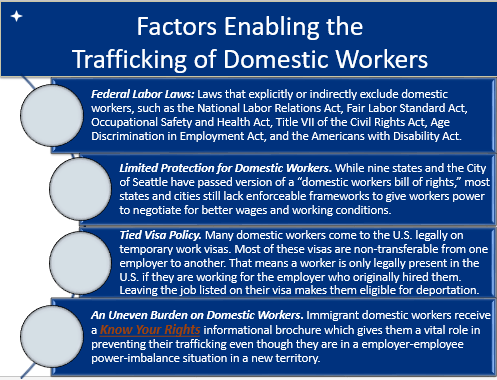 As awareness of human trafficking has grown, mechanisms have slowly been put in place to prevent the crime, provide support to victims and survivors, and hold perpetrators accountable. Collectively, these efforts have helped countless people in domestic work. However, there is still a tremendous amount left to be done to protect the rights, freedoms, and livelihoods of the women and men who serve the needs of households around the nation. There are laws, policies, procedures, and regulations that, if enacted, could dramatically reduce the vulnerabilities of domestic workers and help ensure they are treated with dignity. 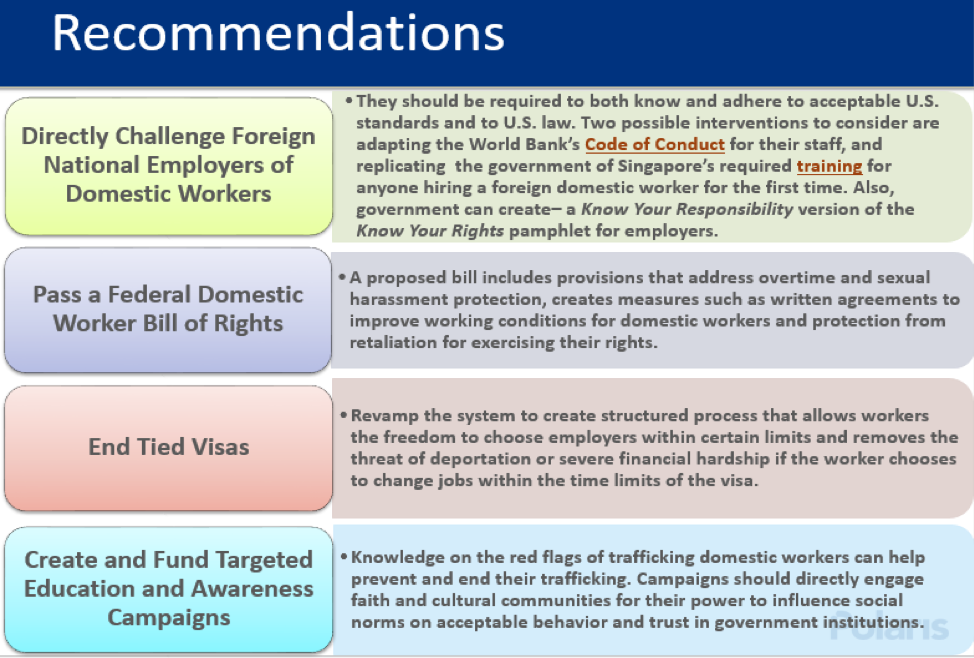 The entire report is available for download here. Additionally, Polaris created a data fact sheet, a guide for families who hire domestic workers, and an overview of the crime of labor trafficking.

Disclaimers: This report does not feature all traffickers of domestic workers reported to the National Hotline. It focuses on trafficking that occurred within the traditionally defined employer/worker relationships as opposed to those with other types of relationships, such as trafficking for domestic work within familiar or romantic situations. While this kind of trafficking is important and deserves attention, the remedies which would effectively address this issue are different and outside of the scope of this document.