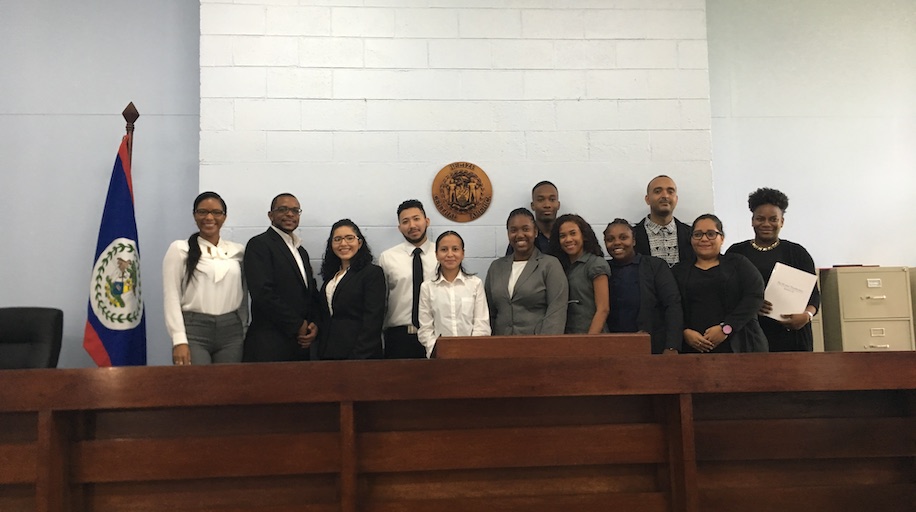 Belizean students exposed to Trafficking In Persons through Moot Trial

This month, 13 Belizean undergraduate students participated in a human trafficking moot trial at the Supreme Court in Belmopan, Belize. Twelve of these students are enrolled in the Criminal Justice Pathway at Galen University, while one is a student at St. John’s Junior College located in Belize City, Belize.

This moot trial, in which students try a simulated case, was the first of its kind to be conducted by Galen University and the judiciary in Belize and was the culmination to the students’ summer semester.  Though it was an academic exercise and a part of the students’ assessment, this trial had significant implications for anti-human trafficking work in Belize.

First, it educated the students on the trial process and the issue of human trafficking in a Belizean context, including domestic legislation.  This is noteworthy, as these students come from a wide cross section of professional and personal backgrounds and are poised to become future change makers in Belize’s criminal justice system.

Secondly, it was a unique opportunity for anti-human trafficking stakeholders to understand complexities that might arise during a human trafficking trial. Presently, there has only been one successful prosecution under Belize’s 2013 Trafficking In Persons (Prohibition) Act, however, there are now three matters are pending before the Supreme Court of Belize.  Although the fact pattern for the moot trial was fictional, it raised potential issues at the investigation, prosecution, and victim-support stages of the process, which offered students the opportunity to practice vital problem-solving skills in real-time. The three- hour trial exercise also revealed problems with witness reliability and the constitutional rights of an accused person.

Representatives from the Belize Judiciary, A-TIPs Council, Belize Police Department, Office of the Director of Public Prosecutions, Princess Royal Youth Hostel, and Belize Central Prison, among others, attended the trial and had the opportunity to become ‘the jury for a day’. Though no verdict was delivered, the observers indicated that ‘ the moot highlights the issues surrounding this important topic’ and that there was ‘proper legal consideration and the desire to connect with the jury’. This could help inform how these stakeholders perform their respective roles given that human trafficking cases in Belize are heard by a jury.

In preparation for the moot trial, the students received training on human trafficking in general as well as specific instruction on Belizean legislation and present realities. This training was facilitated through support and resources produced by the Human Trafficking Institute and was conducted by Cherisse Francis, Judicial Law Clerk to Belize’s Designated Trafficking In Persons Justice.

At the conclusion of the trial, participants and observers alike found the moot trial to be “a really worthy experience for all involved which definitely must be repeated.” One student said, “I have never seen our system as something of interest for me… I have heard about the court but this is the first time that I have actually been exposed to it. I have an entirely different perspective.”

Another student said that “the moot trial helped me to accept that this is a very serious issue that needs urgent attention.” At the conclusion of the event, the participants all recognized their own personal and professional growth and spoke about recommending the activity to future students.

Moreover, the trial allowed for stakeholder collaboration. For example, the Office of the Director of Public Prosecution helped coach students who were assigned the roles of defense and prosecution attorneys. This assistance allowed the students to more deeply appreciate the legal framework as well as the time, effort, and level of research required to prepare a case. One certainty which resonated throughout the trial was that consistent partnerships and involvement of all relevant actors could produce more time efficient, cost efficient, and successful human trafficking prosecutions in Belize.