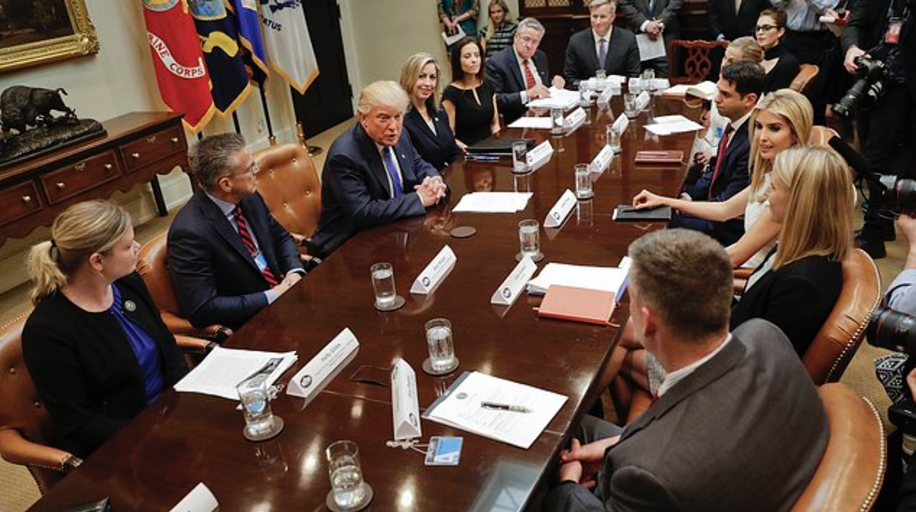 Washington, DC – Human Trafficking Institute Founding Directors Victor Boutros and John Richmond briefed President Trump on human trafficking on February 23 as part a closed-door listening session at the White House. The briefing came from a small, diverse group of trafficking experts, including former federal prosecutors, a former Special Agent with the Federal Bureau of Investigation, victim service providers, a survivor of human trafficking, and others.

The meeting, held in the West Wing’s Roosevelt Room, provided an opportunity for the President and senior Administration officials to hear about domestic and international human trafficking from experts in the field. Some of the issues discussed included law enforcement needs to stop traffickers, the importance of victim-centered prosecutions, funding survivor care services, prevalence estimates, reducing demand, and using technology to develop admissible evidence. Click here to read President Trump’s opening remarks.

Boutros and Richmond provided the Administration with insights based on their experience as federal prosecutors with the U.S. Department of Justice’s Human Trafficking Prosecution Unit and their work with governments around the world on human trafficking cases. Boutros is also co-author of best-selling book The Locust Effect: Why the End of Poverty Requires the End of Violence, and Richmond serves as expert on human trafficking for the United Nations.

“The economic crime of human trafficking is exploding in parts of the world where traffickers operate with impunity,” Richmond said.  “Clear and strategic leadership is needed to extend the protections of law to the men, women, and children forced to work or compelled to prostitute.”

“There is no other side of the aisle on slavery,” Boutros said. “The question for most of us is not whether we should stop traffickers, but whether we can. We are now seeing effective strategies that answer that question with a quantifiable and resounding ‘yes.’ Disciplined leadership in identifying and scaling what works could have a transforming impact on the lives of millions of human trafficking victims in the United States and across the globe.”