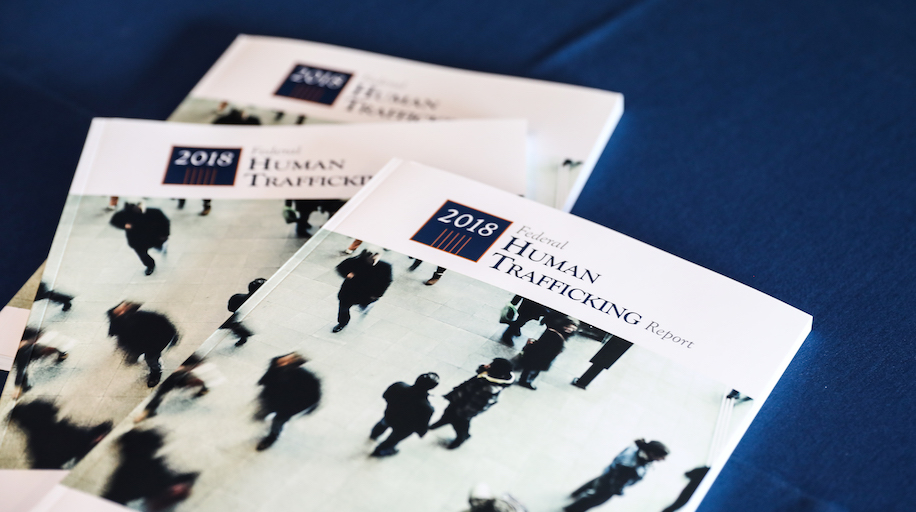 WASHINGTON, DC – The 2018 Federal Human Trafficking Report was released April 10 at the National Press Club in Washington, D.C. The Report, a project of the Human Trafficking Institute, is a continuation of the Institute’s efforts to provide comprehensive data about every criminal and civil human trafficking case that federal courts handle each year. In 2018, there were a total of 771 human trafficking cases in U.S. federal courts with a total of 1,217 criminal defendants and 390 civil defendants in those cases. Report primary authors are Kyleigh Feehs and Alyssa Currier.

Last year marked the inaugural release of this first-of-its-kind Federal Human Trafficking Report, which provided an exhaustive review of the 2017 federal efforts to hold traffickers accountable for their exploitative conduct. Human trafficking is an economically-motivated crime where traffickers compel people to work or to engage in commercial sex acts. U.S. federal law criminalizes a trafficker’s exploitive conduct and provides protections for victims. An effective public justice system is an essential part of a victim-centered and trauma-informed approach to handling trafficking cases.

“The 2017 Report captured wide-ranging information about every human trafficking case that federal courts handled in 2016 and 2017 with the goal of providing objective data to inform discussions by policymakers, researchers, journalists, and nonprofit leaders,” said Victor Boutros, Institute CEO. “The 2017 Report was used as a resource for news stories, in reports by leading nonprofit organizations, and by government agencies and international organizations. One government leader described the Report as the most reliable cross section of human trafficking data within the United States.”

The 2018 Report builds upon the 2017 Report by including data from selected significant years in federal human trafficking law and enforcement. This includes cases initiated in 2000, when the Trafficking Victims Protection Act (TVPA) was enacted and the following year, 2001, as well as cases initiated in 2007 and 2008, capturing data from the first two years of the U.S. Department of Justice’s Human Trafficking Prosecution Unit’s existence as well as one of the years when the TVPA was reauthorized.

Highlights from the 2018 Report:

The 2018 Federal Human Trafficking Report’s findings are not a prevalence estimate of trafficking in the United States, but instead serve as an objective summary of what the federal system has done to address human trafficking. The Report does not capture data from state prosecutions, state civil suits, or unreported human trafficking cases.

A team of 11 attorneys and 7 law school students reviewed every human trafficking case in the federal court system in 2018. In addition, court documents, press releases, and news sources were used to gather a comprehensive set of data to include type of trafficking case, business model, age of the victim, and district where the case took place, among others. The complete report can be downloaded at www.TraffickingMatters.com.