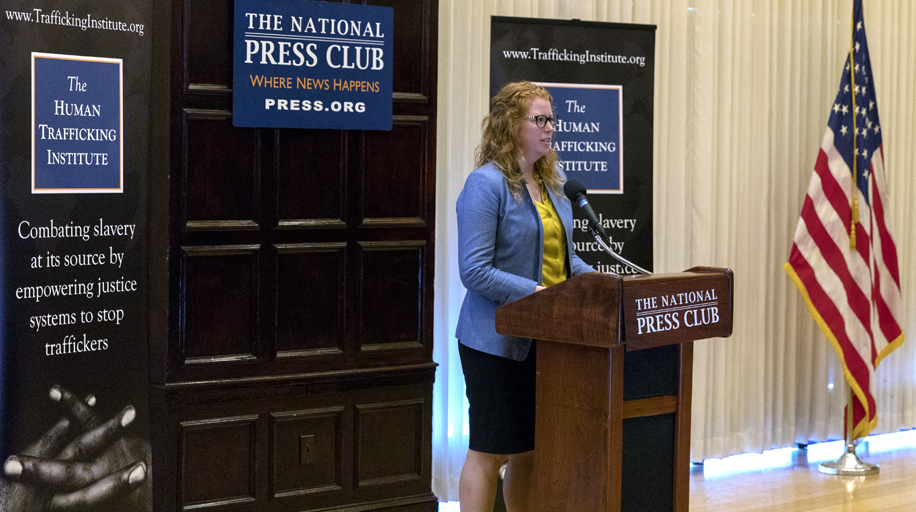 McLean, VA — Annick Febrey recently joined the Institute as Director of Government and Corporate Relations. In this position, she will serve as a bridge between the Institute’s work overseas and the U.S. government. In particular, she will build relationships with members of Congress and provide them with updates on what is happening internationally within the fight against human trafficking.

Febrey joins the Institute after a tenure at Human Rights First, where she led their anti-trafficking campaign, directed their advocacy efforts, testified before Congress, and served as an expert source in a variety of print and online media outlets. Her anti-trafficking experience also includes significant leadership positions at Oxfam America, International Justice Mission, and the White House.

Febrey first learned about human trafficking during her work as a Congressional Staffer. She attended an anti-trafficking benefit dinner and was so moved by the presentation she decided to take her talents and experience from working on Capitol Hill to the fight against human trafficking.

“What surprises me about human trafficking is the lack of accountability for traffickers,” Febrey said. “There are an estimated 24.9 million victims worldwide — and that is a conservative estimate. The U.S. Department of State reported 9,000 convictions in 2017. That’s a tremendous gap when you compare 9,000 convictions to nearly 25 million victims.”

By empowering police and prosecutors on the ground, the Institute seeks to massively improve the rate at which traffickers are held accountable for their crimes.

“I believe in the Institute’s approach to focusing on increasing the accountability of traffickers by embedding experts,” she said. “The approach is really unique. It’s a model that is largely taken from what we have learned over the years in the fight against human trafficking. Those lessons are really informative both here in the U.S. and internationally. We’re not creating something new, but embedding people within existing structures. It is sustainable, and countries can adopt the model in the long term.”

“Human trafficking has existed for thousands of years. But we are finally in a position to end it,” Febrey said.