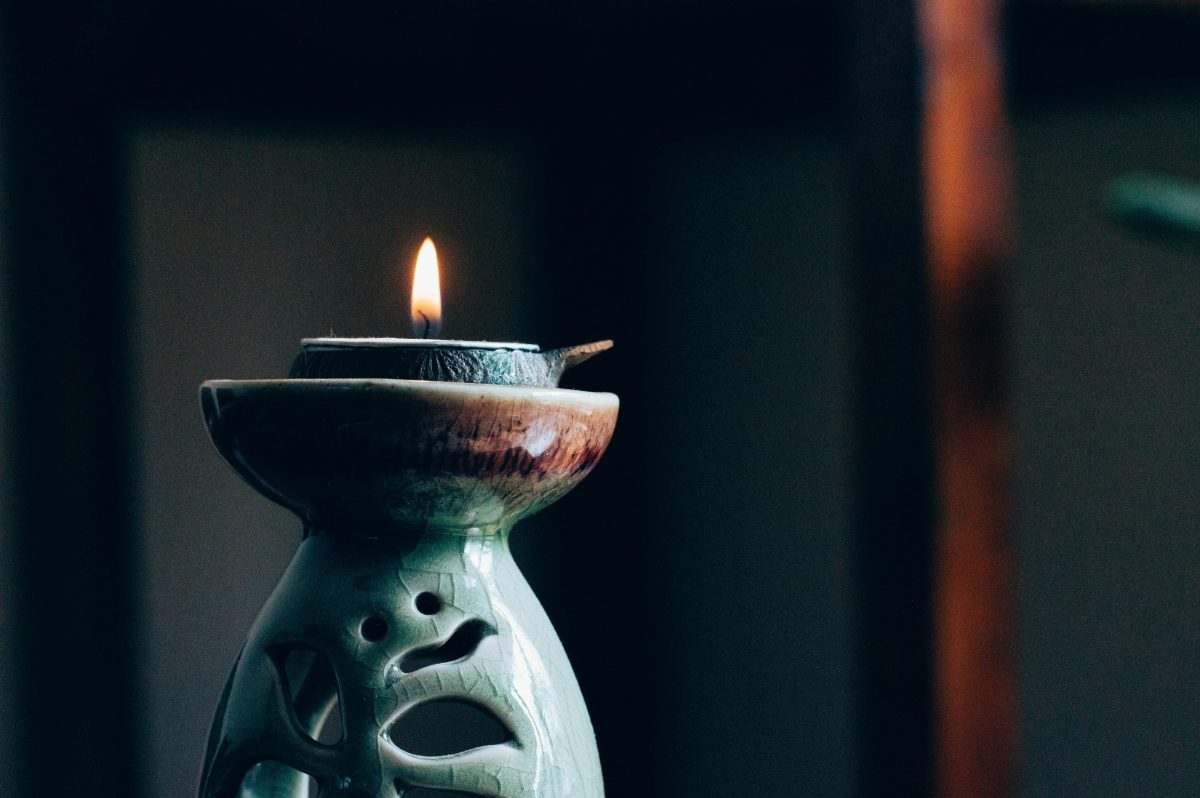 In every state in the United States1, more than 9,0002 suspected Illicit Massage Businesses (IMBs) purportedly exploit tens of thousands of women, profiting from their labor and commercial sex services. Well-documented cases3 bear out an appallingly common story of exploitation for the profit of others:

This scenario plays out on a daily basis in communities where the vast majority of IMBs thrive in plain sight.16, 17 As observed by researchers Sean M. Crotty and Vanessa Bouché in their 2018 study of IMB locations in Houston, “The traditional understanding of a red-light district, occupying a few blocks of an area of urban disinvestment, is insufficient for describing the primary zone of IMB concentration…Indeed, it appears that the commercial sex trade is not an aberration within the retail landscape of Houston, but rather a foundational component of that landscape.”18 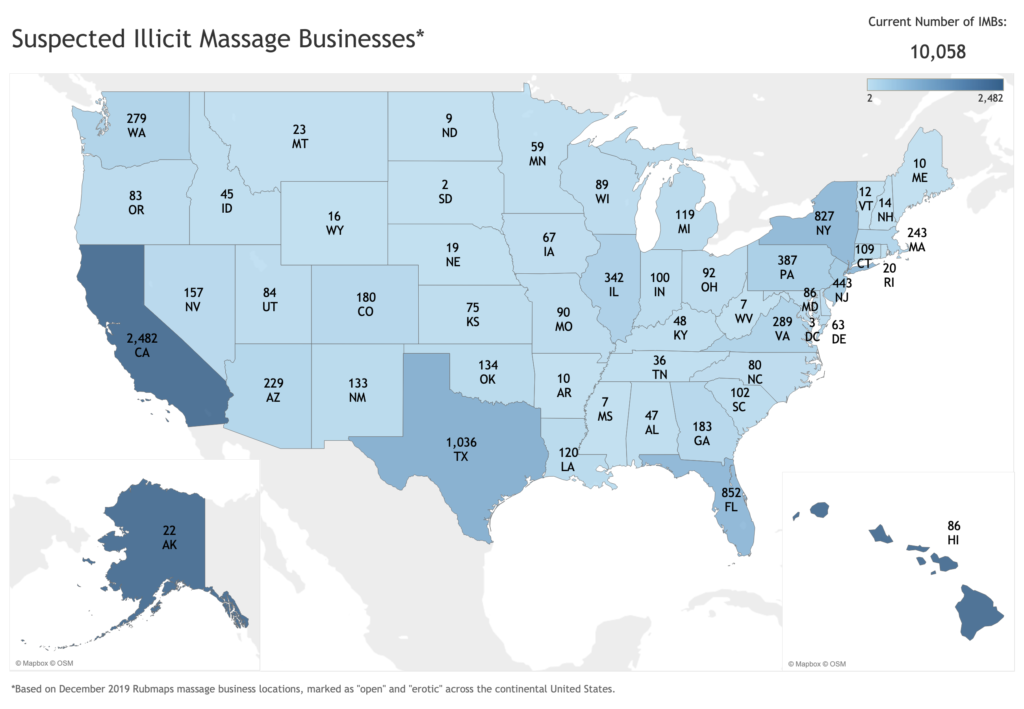 In recent years, awareness of the issue has increased substantially along with targeted response efforts by law enforcement, service providers and anti-human trafficking task forces and coalitions. As efforts to increase awareness and combat human trafficking in the United States trend in a generally positive direction19, the sheer pervasiveness and persistence of the Illicit Massage Industry (IMI) presents two questions:

To answer the first question, it is important to understand what an Illicit Massage Business (IMB) is and what it is not.

It is critical to make a distinction between legitimate, registered businesses and fronts for labor and sex exploitation. The vast majority of massage businesses fall into the former category. These are licensed therapeutic and relaxation massage establishments – legitimate, reputable businesses. They operate legally and provide relaxation and therapeutic non-sexual massage services to clientele in communities of all sizes.

To be considered human trafficking in any venue, a situation must include20: 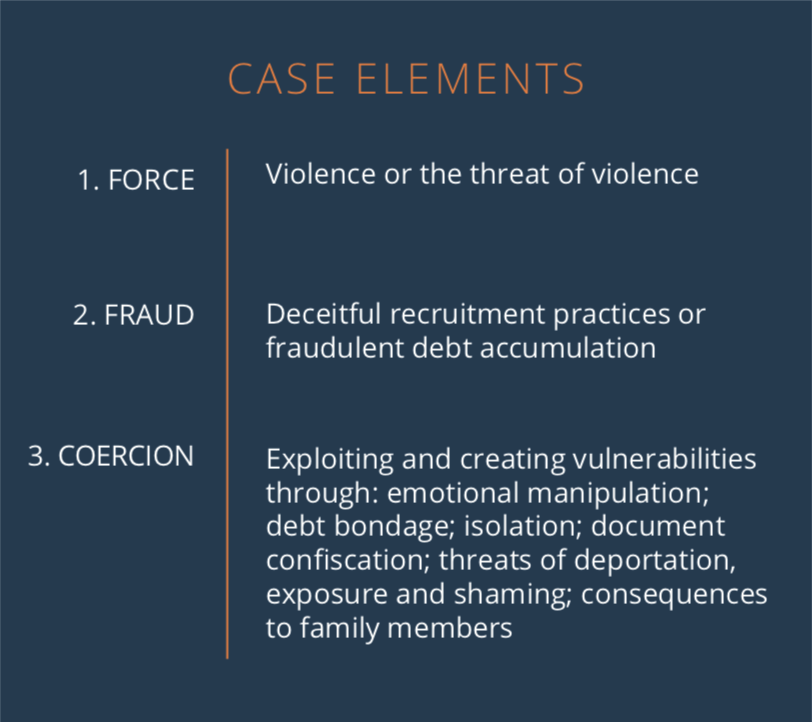 The American Massage Therapy Association observes, “perpetrators have used the guise of operating a massage therapy business to carry out their crimes…”.  This “guise of legitimacy” is what makes the crime of human trafficking in the Illicit Massage Industry (IMI) so successful. Researchers and investigators have found that the perpetrators driving the IMI are not one-off bad actors. Rather, the perpetrators driving the IMI are large-scale, well-organized criminal networks more akin to the mafia, operating “massage” business operations as fronts for providing sexual services. Investigative journalists note these operations are “built to survive police raids.”21

Bob Houston, President and Co-Founder of Praesidium Partners (changing to Heyrick Research in 2020), a Washington, D.C.-based organization combating the illicit massage industry, spent 27 years with the FBI specializing in counterterrorism and transnational organized crime. He identifies the IMI as a criminal enterprise that fits squarely within the transnational organized crime framework.

“To qualify as a transnational organized crime network, an enterprise’s activities need to be self-perpetuating, structured, coordinated, and occur across national borders. The illicit massage industry meets these requirements. Such a network generates illicit revenues which are hidden from taxing authorities, using corruption and violence as business tools,” Houston said.

This criminal enterprise is replete with the factors that allow for a thriving industry to profit from widescale commercial sexual exploitation and labor exploitation of women. Some examples include:

Below is a list of factors IMI trafficking networks exploit to operate a robust global sex trafficking industry:

In the United States, evidence abounds to indicate the IMI thrives largely with impunity because IMB operators exploit vulnerabilities in regulatory, enforcement and nonimmigrant visa processes and systems, as well as the vulnerabilities of workers themselves. In particular, IMI network operators utilize the following approaches to operate IMBs successfully in the United States:

“The ubiquity of massage parlors offers an accessibility and sheen of normalcy not offered by traditional brothels. And as the massage parlors have expanded even into small-town America in recent years, meticulously detailed review sites like Rubmaps have served as the Yelp and Foursquare of the illicit parlor business, with graphic anatomical descriptions of the women and explicit breakdowns of the sexual services proffered.”27

“like other businesses, function using a division of labor and delegation of responsibilities. In the IMI, a person or company owns one or more IMBs. There are paper owners and beneficial owners, the former often being someone paid to lend their ‘clean’ name to business records and the latter an actual owner who profits from the enterprise. Money movers use various methods, including money laundering through legitimate businesses, hawala-like informal funds transfer networks, and traditional financial institutions, to pass IMB revenue to its investors in the United States and abroad.”

Many states and cities acknowledge these gaps and have worked to address them, with varying degrees of success, through efforts to strengthen the regulatory mechanisms overseeing massage practitioners and licensees.28

With regard to exploitation of recruited victim workers, as with other forms of human trafficking, traffickers exploit vulnerabilities unique to foreign national victims and survivors, including language and cultural barriers. In particular, traffickers utilize the following means of coercion and control over workers in IMBs that prevent them from self-identifying or reaching out for help:30

In the 2018 Polaris report, Restore NYC, a service provider serving foreign national survivors of trafficking, including individuals trafficked through IMBs, shared an example of how IMB operators exploit traditional social constructs and cultural norms for nefarious purposes of control and coercion:

“The boss pretended to be a ‘big sister’ to the [victim], communicating to her that we all have to do what is ‘necessary’ for family and their benefit. This hit the heart of the client, and she felt immediately connected to the boss because the boss ‘understood’ her situation and why she was in this country. The client no longer felt ’alone.’ The boss further won her trust by providing free transportation from where she lived to the workplace. This is just a recent example of the trust-building process, that ultimately the boss used to deceive and coerce the client into providing sex services. This parlor was raided by law enforcement, and the client was referred to Restore, where shortly after, we identified her as a survivor.”32

How does the field move forward?

Part two of this series will explore how communities across the United States are moving beyond arresting survivors and one-off storefront closures. Instead, they are finding new ways to effectively and sustainably combat the pervasive labor exploitation and sex trafficking driven by the Illicit Massage Industry.

*With appreciation for the Heyrick Research team’s insight and expertise.