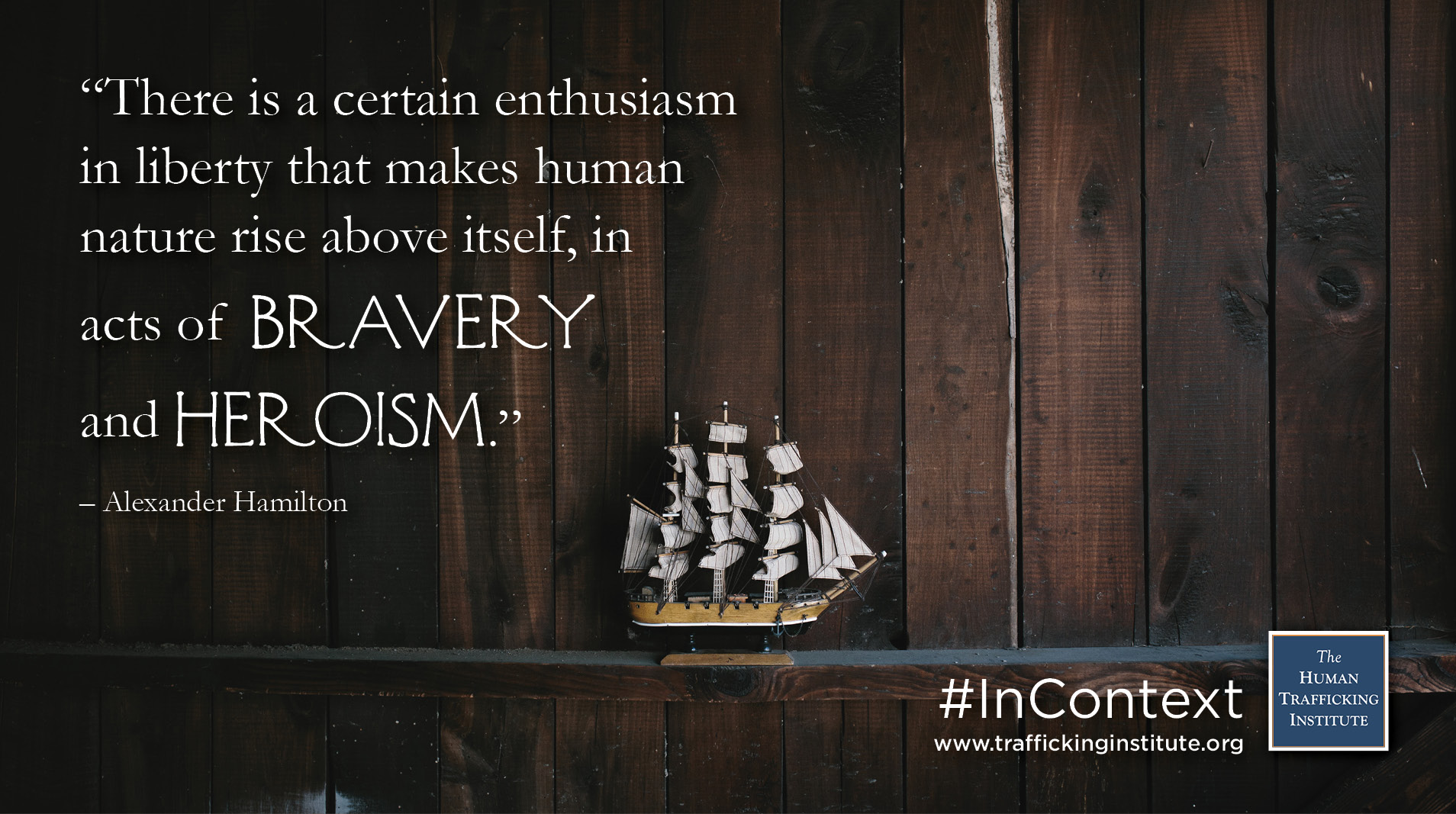 Few Founding Fathers faced the tragedy, hardship, and adversity Alexander Hamilton encountered throughout his life. Unlike many of his fellow revolutionaries, his story is not one of wealth or nobility. Rather, it is one of bravery and brash persistence. He spent his life fighting systems of tyranny, corruption, and inequality, because he experienced them personally.

Years before his name evoked patriotic images of waving American flags, Alexander Hamilton was known only as the bastard orphan son of Rachel Fawcett Lavine. After escaping an abusive first marriage, Hamilton’s mother found refuge with James Hamilton, a traveling tradesman in the West Indies, and together, the two had James Hamilton Jr. and Alexander Hamilton.

Less than 10 years after his birth, Hamilton’s father abandoned the young family, forcing them to move in with relatives in St. Croix. Then, in 1768, 11-year-old Hamilton began work as a clerk in the counting house of two New York merchants living in the West Indies.

Shortly after, Rachel started running her own small shop, which was rare for a woman of her time, and Hamilton earned a bookkeeper position at the counting house. In the winter, both Rachel and Hamilton began to exhibit signs of yellow fever, and over the next several weeks, their conditions worsened. On February 19, 1768, Rachel died of yellow fever, but Hamilton survived. Upon Rachel’s death, Alexander and James’ cousin Peter became their guardian. However, only a year later, he took his own life, leaving the brothers deserted once again.

Unwilling to let his orphanhood deter him from achievement, Hamilton sought the help of his friends at the counting house. The friends pooled their money, allowing him to attend a preparatory school in Elizabethtown, New Jersey, and in the fall of 1773, his intelligence and talents earned him an opportunity to study at King’s College (later Columbia University) in New York. There, he was quickly seen as a student of high caliber and promise, but after three years of education, he was unable to finish his degree.

The first bullets of the Revolutionary War were shot at the Battles of Lexington and Concord in 1775, and local aggression forced King’s College to close before Hamilton could receive his diploma. It was at this point in history when the Alexander Hamilton known today came to life as he picked up a pen and began to write.

His first public writing was a pamphlet opposing the British taxes on imported goods entitled, “A Full Vindication of the Measures of Congress,” which he signed with a pseudonym, Publius. Because the writing was attributed to either John Jay or John Adams (some of the most notable influencers of the time), Hamilton rapidly began to earn respect among revolutionaries.

Next, he wrote the provocative and witty, “The Farmer Refuted,” in which he picked apart the arguments of colonists who thought a war against Great Britain was not only unwise but intolerable. He wrote directly to the man in greatest opposition to his first work, Bishop Samuel Seabury, who he referred to as the “Farmer.” In his response, Hamilton first appealed to the Farmer’s argument with logic, attacking the Farmer’s economic reservations on a war against a behemoth like Britain. Later, he appealed to the Farmer’s heart, saying:

“There is a certain enthusiasm in liberty, that makes human nature rise above itself, in acts of bravery and heroism. It cannot be expected, that America would yield, without a magnanimous persevering and bloody struggle. The testimony of past ages, and the least knowledge of mankind, must suffice to convince us of the contrary.”

Hamilton believed a country worth it’s patriotism was a county worth struggling for – regardless of the losses suffered. He counted the cost, and he chose bravery over complacency. He chose heroism over safety. He chose freedom.

On December 26, 1776, he put his words to the test when he exchanged his quill and ink for guns and artillery at the Battle of Trenton, where he led his battalion to a key victory, saving General George Washington and his men in the process.

Over the next 10 years, Hamilton achieved great success both personally and professionally. He served as General Washington’s aide-de-camp and also as a lieutenant in the Continental Army. Hamilton also met and wooed Elizabeth Schuyler, the daughter of the wealthy General Philip Schuyler. The two married on December 14, 1780, and their first child Alexander, was born on January 22, 1782.

Later that year, Hamilton was admitted to the New York bar despite his lack of degree, giving him a platform to continue to use his precocity in speech and writing to spur on the growth of the new nation. In 1786, Hamilton was elected as a delegate for the New York legislature, which gave him a seat at The Constitutional Convention in Philadelphia the next year.

It was during this time of national hopefulness and fragility that Hamilton, James Madison, and John Jay wrote the 85 Federalist Papers. Hamilton authored 51 of them. The objective of the essays was simple: to defend the U.S. Constitution in its infancy and convince the states to choose ratification.

Like Hamilton, we all have choices. Each day, we can choose bravery over complacency, and heroism, in all its forms, over personal safety. We can use our voices to bring freedom where there is bondage, for we must believe, “there is a certain enthusiasm in liberty that makes human nature rise above itself.”