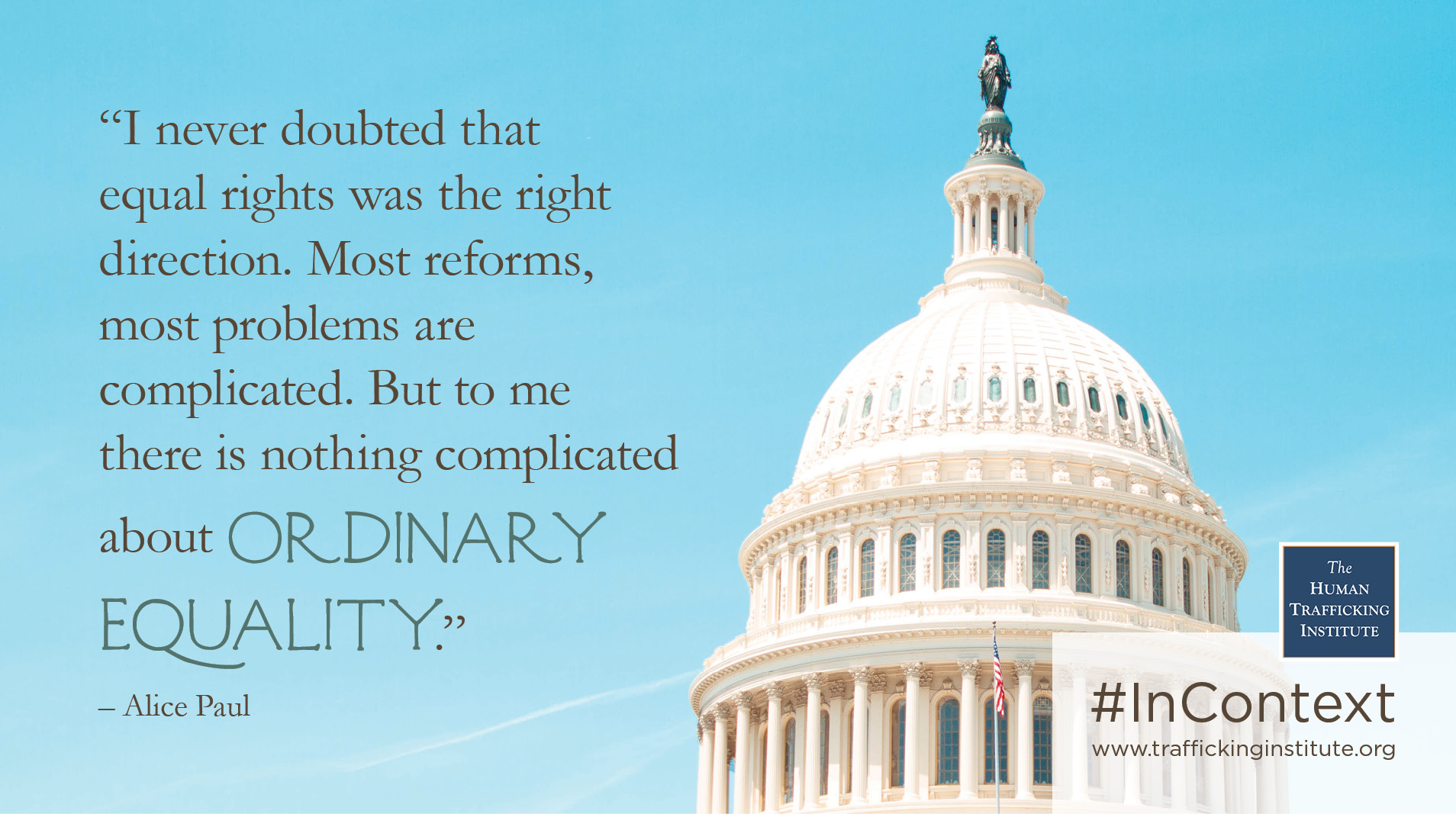 Women have cast ballots and contributed to the greater American vision as voters for a century. On August 25, 1920, the 19th Amendment to the U.S. Constitution was ratified, granting women the right to vote and ending nearly 100 years of protest. Alice Paul was one of many brave suffragists who risked her life to fight for future generations of women. From protesting outside the White House to educating and building a network of female leaders, she is a hero to be remembered in American history.

Alice Paul was born on January 11, 1885, in Mount Laurel, New Jersey. As the oldest of four children, she followed in her parents footsteps – a couple who was passionate about gender equality, education for women, and improving society as a whole. Her mother was a suffragist, so from a young age, Paul attended women’s suffrage meetings where she was first exposed to revolutionary ideas. Paul attended Swarthmore College, a Quaker school cofounded by her grandfather, and graduated with a B.S. in biology in 1905. She received a Master of Arts degree in sociology at New York School of Philanthropy, now Columbia University, and then moved to England to study social work at Woodbrook, a training school for Quakers. Upon returning to the United States, she earned a PhD from the University of Pennsylvania in 1910.

When Paul was studying in England, she witnessed the women’s suffrage movement there with a fellow American, Lucy Burns. Together, they learned militant protest tactics, including picketing and hunger strikes. When the two women returned to the United States, they joined the National American Woman Suffrage Association (NAWSA), however NAWSA’s primary goal was to focus on state-by-state campaigns until it finally pushed through as a national amendment. This was too small of a dream for Paul; she wanted to focus solely on lobbying Congress for a constitutional amendment. Paul and many others left NAWSA and formed the National Woman’s Party.

Paul was known to have a “fast-moving and autonomous style,” and this in combination with her upbringing made her believe it was never a question if she was committing her life to the right cause; equal rights were a no brainer for her. In an interview with Paul at the age of 89, she said,

“I never doubted that equal rights was the right direction. Most reforms, most problems are complicated. But to me there is nothing complicated about ordinary equality.”

Because this fight was simple for Paul, she was willing to risk her reputation and life. On March 3, 1913, the day before Woodrow Wilson’s inauguration, Paul organized her first and largest picket in support of suffrage. About 8,000 women marched in Washington, D.C., down Pennsylvania Avenue, from the Capitol to the White House, carrying banners and floats as a half million spectators watched, supported, and harassed the marchers.

In January 1917, Paul and more than 1,000 fellow supporters continued to fight for the constitutional right to vote, despite hearing from Wilson that “it was not yet time for an amendment to the Constitution.” The picketers held signs saying, “Mr. President, how long must women wait for liberty?” The silent picket unraveled as spectators started to verbally and physically attack the suffragists, and the police arrested them. Hundreds of women, who joined Paul in a new nonviolent form of civil disobedience, were imprisoned. While in jail, they received horrible treatment, and once journalists leaked their mistreatment, the public became outraged and the suffragists gained even more public support.

Paul was imprisoned three times. During a seven-month sentence, she organized a hunger strike in protest from her prison cell. Doctors threatened to send Paul to an insane asylum and force-fed her in an attempt to debilitate her hunger strike. Her persistence and unwillingness to be quiet stirred up public sympathy and only multiplied American support for suffrage. Fear of authority or stirring up change never made the fight complex for Paul. She never doubted the dream of equal rights and continued to believe in what she was fighting for – despite the consequences. By 1918, Wilson finally announced his support for suffrage, and two years later, after the Senate, House, and the required 36 states approved, the 19th Amendment was added to the Constitution in 1920. Paul was 35 years old.

The 19th Amendment was only the beginning. Paul continued to fight for equality around the world, educating women, and building a network among them. When she was 37, she earned a law degree from Washington College of Law at American University, and wrote the very first version of the Equal Rights Amendment. And, after World War II, she fought for gender equality in the charter of the United Nations. In 1977, at the age of 92, Paul died in her hometown of Moorestown, New Jersey.

A century-long battle unlocked a century of rights for women in America. Paul reminds us that choosing to fight for justice and equality will always move our world in the right direction.