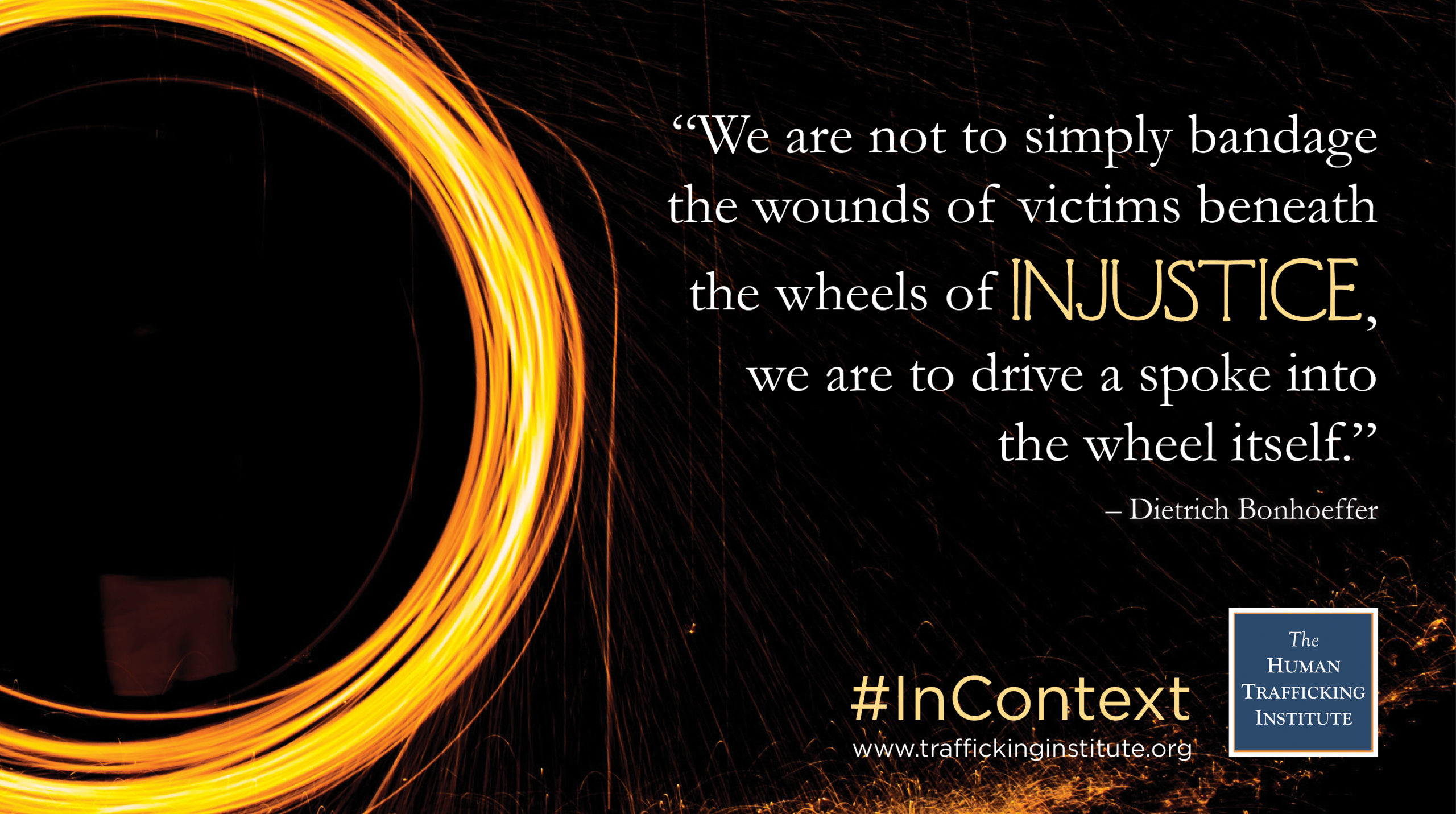 As a newly ordained pastor, young Dietrich Bonhoeffer stood boldly before a large group of German clergy and church-goers and delivered his call-to-action, “the Church and the Jewish Question.” It was April 1933 in Germany, and Hitler had recently been elected Chancellor. Bonhoeffer, incensed by the Nazi regime and the acquiescing church, urged Germans to consider how one can respond to and resist injustice. He proclaimed “an unconditional obligation to the victims of any ordering of society.” Several walked out, but undeterred, Bonhoeffer continued:

“We are not to simply bandage the wounds of victims beneath the wheels of injustice, we are to drive a spoke into the wheel itself.”

This conviction ultimately cost him his life.

Bonhoeffer had not always carried such raw conviction. He was born on February 4, 1906, to educated parents and into a fairly comfortable lifestyle. His family raised him to be compassionate, but his early life was not one which exposed him to injustice.

Pursuing a career as an author and pastor, young Bonhoeffer traveled to New York to study at Union Theological Seminary, where he met his friend Frank Fisher, a young black man from Alabama. Fisher’s personal stories about racism propelled Bonhoeffer towards a deeper understanding of racial injustice in the American South. Bonhoeffer traveled through Mississippi and Alabama and witnessed first-hand segregation and dehumanization of black Americans — in public transportation and restaurants, in neighborhoods, in everyday speech. Back in New York, Bonhoeffer and Fisher found community in Harlem, where Bonhoeffer’s faith transformed from “phraseology to reality.” The vibrancy of African American culture, music, and dignity was a sharp contrast to the ugliness of racism. Bonhoeffer was forever impacted by these experiences, not simply out of compassion for victims of racism and hatred, but because he had encountered a community and friends worthy of protection, honor, and respect.

Bonhoeffer returned to Germany with a clearer understanding of social justice, in particular racial justice, and the rest of life was an application of these convictions. As the Nazis came into power, the implications of their discriminatory rhetoric were not lost on him. Over the months and many years following Hitler’s election, Bonhoeffer spoke out against Nazism. Along with his notable call-to-action, he wrote, published, and even attempted to speak on the radio. In opposition to Nazi ideology, he founded an underground seminary for the anti-Nazi Confessing Church.

The Gestapo eventually closed the seminary, arresting and imprisoning 27 of Bonhoeffer’s students. Although now forbidden to print or publish, and though aware of the danger to himself, Bonhoeffer felt compelled to remain in Germany during the war. He worked with the resistance as a spy, and in 1941, he joined in Jewish rescue action Operation 7. Not limited to rescue efforts alone, he collaborated with Admiral Canaris and others in clandestine operations to undermine the Nazis.

Bonhoeffer spent his last 18 months imprisoned for his active opposition to the Nazi regime. Accused of a plot to kill Hitler, he was hanged in the Flossenbürg Concentration Camp on April 9, 1945, at age 39. His words and actions still influence those pursuing justice today. Bonhoeffer demonstrated a commitment not only to victims of Nazi Germany but a commitment “to drive a spoke into the wheel” and dismantle the Nazi machine in its tracks. As we learn to improve the manners in which we rescue and restore the survivors of human trafficking, we must also learn to disrupt and halt the momentum of human trafficking and prevent victimization before it begins.