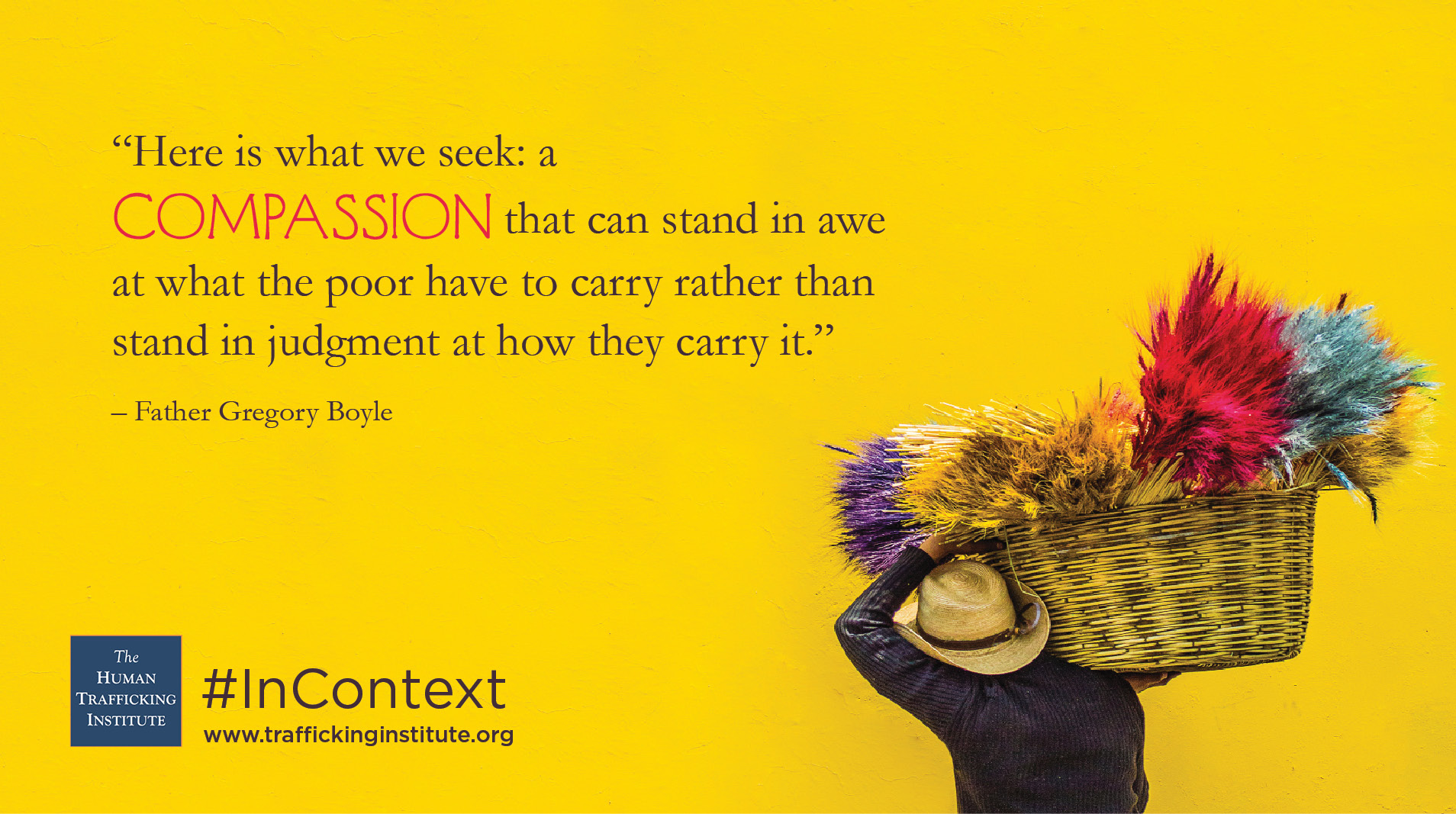 Father Gregory Boyle demonstrates how compassion requires discomfort. He goes to the places where nobody wants to go, and he works with the people who nobody wants to work with. His radical approach to gang violence is driven by a boundless compassion, crossing into the dangerous yet desperate streets of East Los Angeles’ Boyle Heights neighborhood.

Although he spent most of his life in L.A., there was another side to the city that would change his understanding of caring for the poor.

In his 2010 New York Times bestseller Tattoos on the Heart: The Power of Boundless Compassion, Boyle describes the devastating impact of the “lethal absence of hope” among the gang community during the 1980s and early 1990s, also known as the “decade of death.” During this time, gang-related killings peaked at 1,000 in 1992. At the time, criminal justice policies and tactics were primarily determined by suppression and mass incarceration.

Boyle was ordained as a priest in 1984. In 1986, he became the pastor of Dolores Mission Church, the poorest Catholic parish in Los Angeles. The parish included Aliso Village and Pico Gardens, which at the time were the largest public housing projects west of the Mississippi, and the community had the highest concentration of gang violence in L.A. Although existing efforts provided jobs as a means to get members out of the ruthless cycle, Boyle realized a job was not the sole solution because “…the minute any kind of monkey wrench was tossed into the mix, they would unravel, you know, that there was no resilience.” A job could not compete with the addictive pull of the streets.

Boyle sought to approach gang violence in a new way: treat members as human beings and pair employment with a space for healing. This realization redefined compassion for Boyle, and ultimately served as the framework for his future work with gang members. In Tattoos on the Heart, he traces his new understanding of compassion. He writes:

“Here is what we seek: a compassion that can stand in awe at what the poor have to carry rather than stand in judgment at how they carry it.”

Boyle chose to step over boundaries. As he tried to make sense of life stories, he stood in awe as lives were predestined to be swallowed by the decade of death.

In 1988, Boyle launched a program to address gang-involved youth by providing positive alternatives, including an elementary school, a daycare program, and legitimate employment for young people. In 1992, he founded Homeboy Bakery, a social enterprise, which provided training, work experience, and an opportunity for rival gang members to collaborate while “breaking bread together.” This was his response after witnessing what gang members carried, and served as an opportunity to lighten their burdens through relationships and a new purpose in life.

These efforts laid the groundwork for the independent non-profit organization Homeboy Industries, established in 2001. Today, it is the largest gang intervention and re-entry program in the country. Homeboy Industries is comprised of a number of businesses, including a restaurant, bakery, cafe, and farmers market, which serve as platforms for on-the-job training.

As a national model to combat gang violence, Homeboy Industries provides hope, training, and support to formerly gang-involved and previously incarcerated men and women, serving over 10,000 members a year. In conjunction with the business experience, Homeboy provides healing services from removing tattoos to anger management and parenting classes.

In his sixth year of walking alongside gang members, Boyle’s definition of compassion took a significant turn. He realized he mistakenly tried to “save” young men and women, inserting his desires into their story, rather than patiently waiting for their hearts to change.

Boyle’s reflection further refined his understanding of healing and compassion: “We cannot turn the light switch on for anyone. But we all own flashlights. With any luck, on any given day, we know where to aim them for each other. We do not rescue anyone at the margins. But go figure, if we stand at the margins, we are all rescued. No mistake about it.”

Homeboy Industries shares transformation stories, revealing the power of Boyle’s vision as men and women are learning important job skills, healing from their past, and rebuilding a new life.

Boyle authored the 2017 Los Angeles Times-bestseller Barking to the Choir: The Power of Radical Kinship. He has received the California Peace Prize and has been inducted into the California Hall of Fame. In 2014, the White House named Father Boyle a Champion of Change, and in 2017, he received the University of Notre Dame’s Laetare Medal, the oldest honor given to American Catholics.