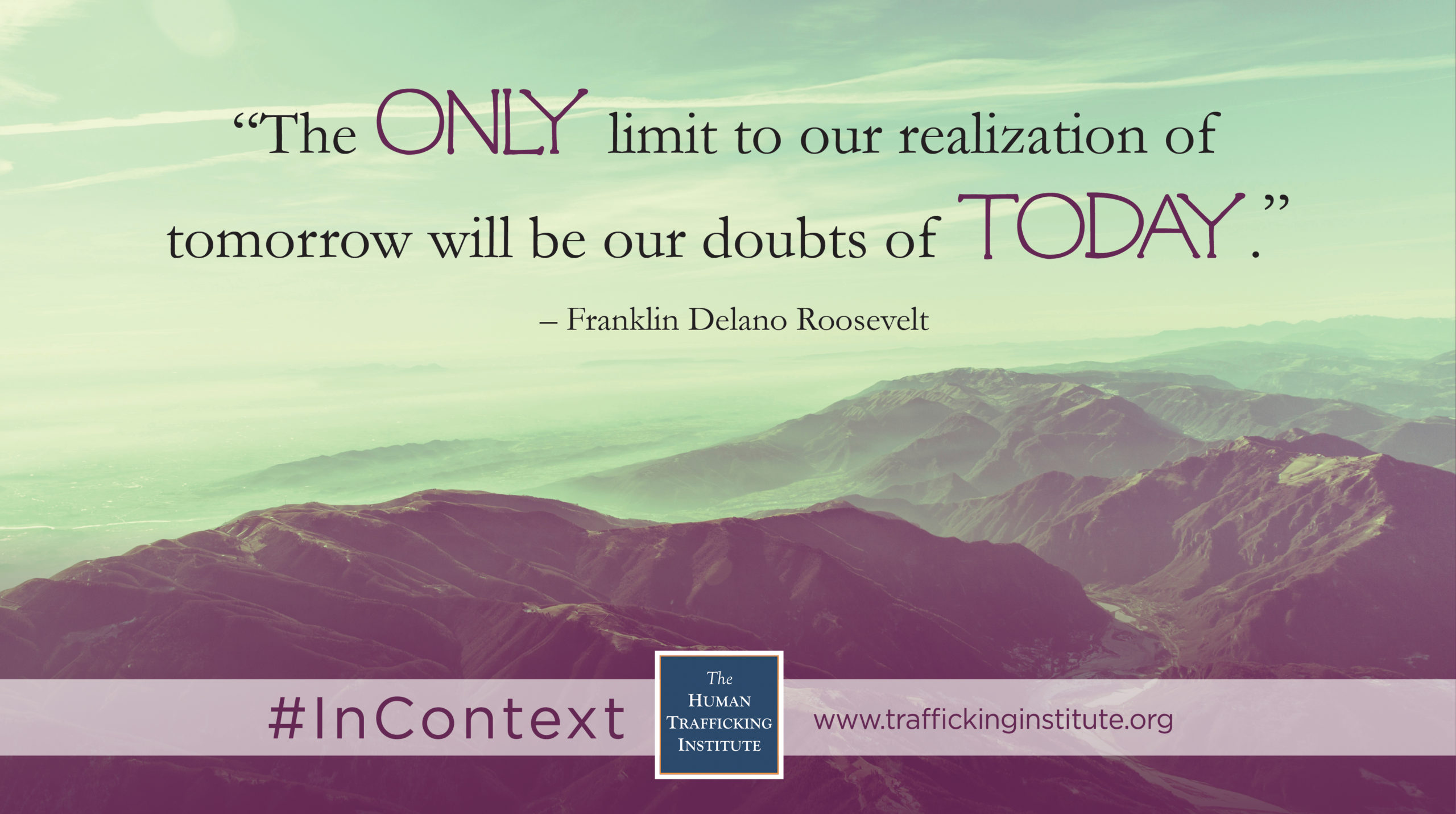 The Franklin Delano Roosevelt Memorial in Washington D.C. is an experience as much as it is a structure. Granite walls form four open-air rooms – one for each of the president’s four terms. Carved into the granite of the memorial are Roosevelt’s own words and from these quotations it is clear that throughout his presidency, he was deeply concerned with social justice, both within the United States and across the globe.

Roosevelt was elected to his first term (1933 – 1937) in the midst of the Great Depression. With the stock market in shambles and unemployment breaking 20%, Roosevelt provided a message of hope. Carved into stone in the first room: “The only thing we have to fear is fear itself.” Instead of spending time being afraid, Roosevelt wanted to spend time finding solutions. And he was interested in solutions that served all groups: “Among American citizens, there should be no forgotten men and no forgotten races.”

During Roosevelt’s second term (1937 – 1941), the Works Progress Administration, Civilian Conservation Corps and other government programs were in full swing, putting millions of Americans to work. Both the economy and the morale of the nation received a boost by the rise in employment, and a safety net was put into place with the Social Security Act. As Roosevelt revolutionized the role of the federal government in the lives of Americans, he continued to emphasize society’s obligation to all people.

Carved into the monument’s second room: “We must scrupulously guard the civil rights and civil liberties of all our citizens, whatever their background. We must remember that any oppression, any injustice, any hatred, is a wedge designed to attack our civilization.” This emphasis seemed to play out in the reality of oppressed minorities, as Southern blacks migrated to the Democratic Party and helped Roosevelt hold his unprecedentedly long presidency.

Roosevelt’s third term (1941-1945) coincided with the United States’ involvement in World War II. The Japanese attack on Pearl Harbor on December 7, 1941, galvanized the U.S. to declare war on Japan, and in turn on Germany. America joined the Allied forces in resisting a dictator whose primary motivation was ethnic discrimination. Roosevelt’s concern for justice was now global. As he said of the struggle against Hitler in 1943, carved into the third room: “We have faith that future generations will know here, in the middle of the 20th century, there came a time when men of good will found a way to unite, and produce, and fight to destroy the forces of ignorance, and intolerance, and slavery, and war.”

In the wake of World War II, Roosevelt spent much of his fourth term (1945-1949) working to establish the United Nations. He understood the global peace recently established was temporary and wanted the world to come together in a unified front against future injustice. Carved into the fourth room are words Roosevelt prepared for Jefferson Day on April 13, 1945: “The only limit to our realization of tomorrow will be our doubts of today. Let us move forward with strong and active faith.”

The fight against the scourge of trafficking can seem at times like a hopeless battle, but given the reproducible progress that has been made in several locations, the only thing that can ultimately defeat us is our doubts.