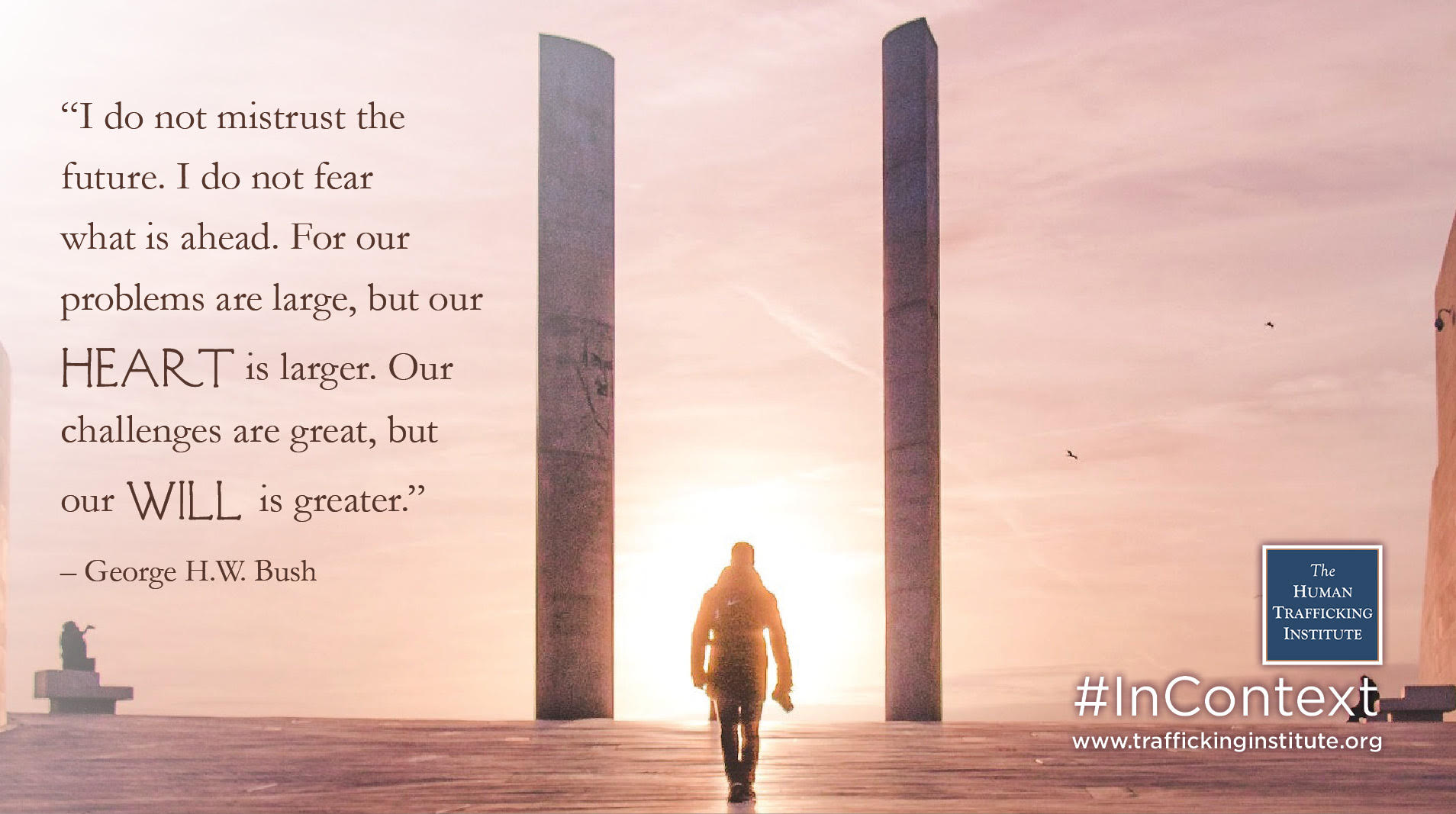 On the evening of November 30, George H.W. Bush, the 41st President of the United States passed away peacefully in his home in Houston, Texas. Remembered for his kindness, compassion, humor, and prolific writing, Bush served in numerous capacities in the public and private sector before finally ascending to the Presidential office in 1989.

Bush was born on June 12, 1924, in Milton, Massachusetts, to Prescott Sheldon Bush, an investment banker and U.S. Senator from Connecticut, and Dorothy Walker Bush, a prominent St. Louis socialite. He spent his formative years in Greenwich, Connecticut, and attended boarding school in Andover, Massachusetts. Upon graduation from Phillips Academy, he joined the U.S. Naval Reserve and served from 1942 to 1944 as a torpedo bomber pilot on aircraft carriers in the Pacific during World War II, flying some 58 combat missions. In 1944, he was shot down by the Japanese. For his service he won the Distinguished Flying Cross. In January 1945, he married Barbara Pierce.

Following the family tradition, Bush attended Yale University, graduating in 1948. After rejecting a position in his father’s firm, he moved with his young family to Texas and became a salesman of oil field supplies. He co-founded the Bush-Overbey Oil Development Company (1951), the Zapata Petroleum Corporation (1953), and the Zapata Off-Shore Company (1945).

In 1959, he became active in the Republican Party in Houston. After losing a campaign for the U.S. Senate to Democrat Ralph Yarborough in 1964, Bush was elected in 1966 to a Republican seat in the U.S. House of Representatives. He gave up the seat in 1970 to run again for the Senate. He was defeated again, this time by Democrat Lloyd Bentsen, Jr. Shortly after his defeat, Bush was appointed by President Richard M. Nixon to serve as U.S. Ambassador to the United Nations. In 1973, as the Watergate Scandal was erupting, Bush became chairman of the Republican National Committee. In this post, he stood by Nixon until August 1974, when he joined a growing chorus of voices calling on the president to resign.

Later in 1974, Bush was named the chief of the U.S. Liaison Office in Beijing – which was then the senior U.S. representative in China. He served in the role until he was asked to head the Central Intelligence Agency in 1976. When Jimmy Carter took the oath of office in 1977, Bush resigned from his post at the CIA and returned to Texas, where he announced his candidacy for president in 1979. Although he lost in the primary, he was eventually selected by Ronald Reagan to be Vice President, a job that he accepted and received countless accolades for later in life. He announced a second, successful run for President in 1988, becoming the first person in nearly 150 years to have been elected President directly after serving as Vice President.

Bush, who would eventually be known by both of his middle initials after his son won the office years later, not only won the election following Reagan’s eight years in office – he won it by a massive electoral margin. His popular vote count outpaced Democratic nominee Michael Dukakis by about 8 million votes, but Bush had won 426 electoral votes compared to just 111 won by Dukakis.

Bush kicked off his inauguration speech on January 20, 1989, by acknowledging Reagan by telling the American people that the future was not something to be feared but to be embraced:

“I do not mistrust the future. I do not fear what is ahead. For our problems are large, but our heart is larger. Our challenges are great, but our will is greater.”

His presidency collided with monumental world events, including the collapse of communism in Eastern Europe and the Soviet Union and the reunification of Germany. In November 1990, Bush met with Soviet leader Mikhail Gorbachev in Paris to sign a mutual nonaggression pact, signaling the symbolic end to the Cold War.

Although his campaign in 1992 against Bill Clinton for reelection was unsuccessful, he remained a gracious and encouraging member of the American political sphere for the remainder of his life. In each case, Bush looked toward the future as a beacon of hope amidst worldwide challenges. Likewise, although the challenges associated with human slavery can seem overwhelming, we must look with determination toward the future as a means to inspire hope in the present. Through hard work and diligence, we can strive to decimate slavery and restore justice to people around the world.