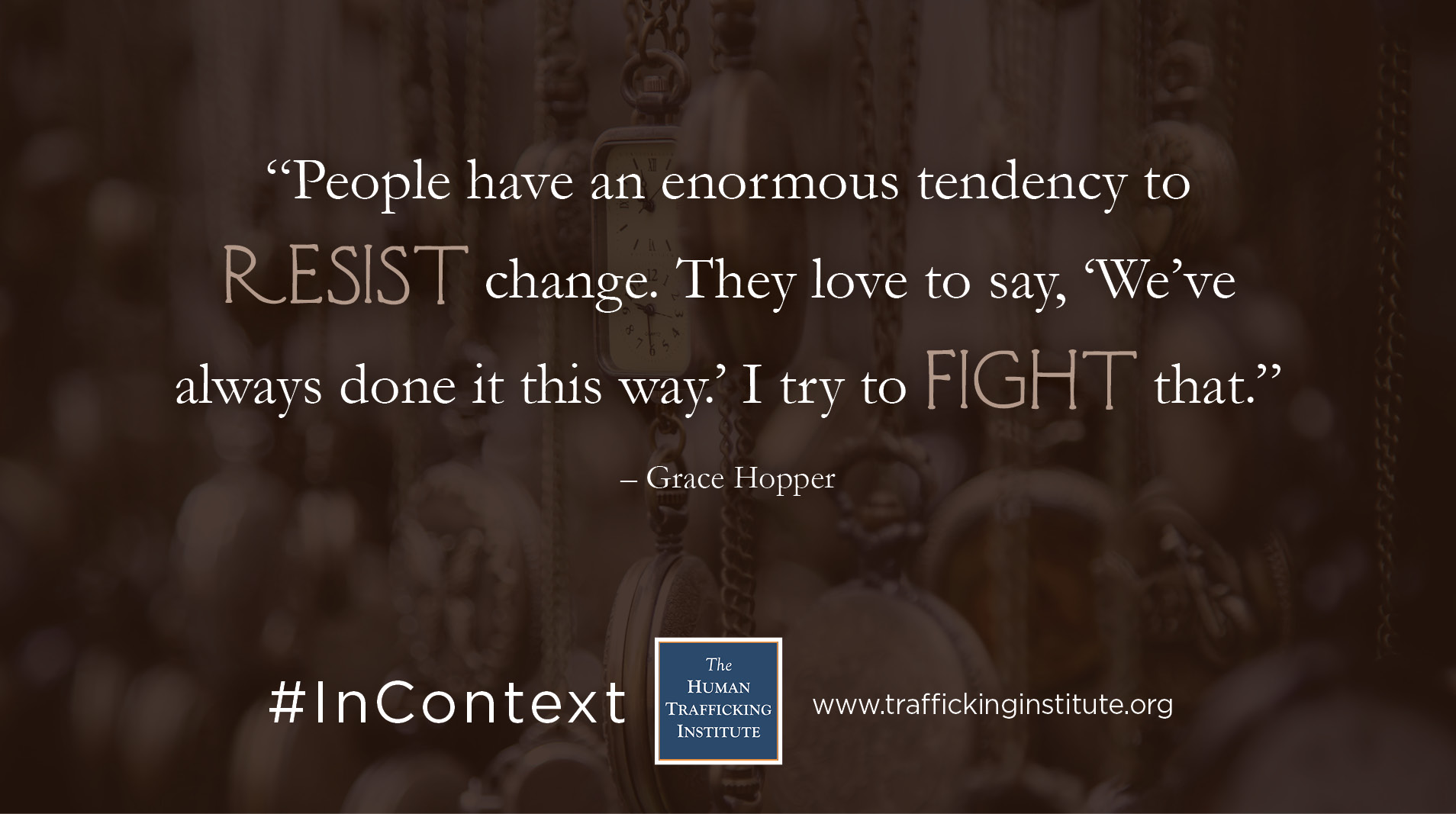 The daughter of Walter Fletcher Murray and Mary Campbell Van Horne, Grace Brewster Murray was born in 1906 in New York City, where her father owned an insurance company. In 1928, she graduated Phi Beta Kappa from Vassar College with degrees mathematics and physics.

In 1930, she received her master’s degree in mathematics. In the same year, she married Vincent Foster Hopper, a name she kept even after the couple divorced in 1945. Hopper began teaching mathematics at Vassar while pursuing her doctorate. She completed her Ph.D. in mathematics from Yale in 1934 – becoming one of the first women to earn such a degree. During a one-year sabbatical from Vassar, Hopper studied with the famous mathematician Richard Courant at New York University.

After the bombing of Pearl Harbor and the United States’ entry into World War II, Hopper decided to join the war effort. She chose the Navy since it had been her grandfather’s branch of service. Although she was initially rejected because of her age and small stature, she continued to press the officer in charge and eventually received a waiver to join the U.S. Naval Reserve (Women’s Reserve). In December 1943, she took a leave of absence from Vassar, where she was an associate professor, and completed 60 days of intensive training at the Midshipmen’s School for Women at Smith College in Northampton, Massachusetts.

Hopper received her commission (lieutenant junior grade) and was assigned to the Bureau of Ships Computation Project at Harvard University. There, she joined a team working on the IBM Automatic Sequence Controlled Calculator, better known as the MARK I, the first electromechanical computer in the United States. Under the guidance of Howard Aiken, who had developed the MARK I, Hopper and her colleagues worked on top-secret calculations essential to the war effort – computing rocket trajectories, creating range tables for new anti-aircraft guns, and calibrating minesweepers. One of the first three “coders” (now known as programmers), Hopper also write the 561-page user manual for the MARK I.

After the war, Hopper remained with the Navy as a reserve officer. As a research fellow at Harvard, she worked with the MARK II and MARK III computers. She was at Harvard when a moth was found to have shorted out the Mark II and is thus given credit for the invention of the term “computer bug” – though she didn’t actually author the term, she did help popularize it.

Hoping to continue to work with computers, Hopper moved into the private industry in 1949, first with the Eckert-Mauchly Corporation, then with Remington Rand, where she oversaw programming for the UNIVAC computer. In 1952, her team created the first compiler for computer languages (a compiler renders worded instructions into code that can be read by computers). This compiler was a precursor for the Common Business Oriented Language, or COBOL, a widely adapted language that would be used around the world. Though she did not invent COBOL, Hopper encouraged its adaption.

Hopper retired from the Naval Reserve in 1966, but her pioneering computer earned her such recognition that she was called back to active duty – at the age of 60 – to tackle standardizing communication between different computer languages. She remained with the Navy for 19 years. When she retired again in 1986, at age 79, she was a rear admiral as well as the oldest serving officer in the service. During her farewell address in Washington, D.C., Hopper spoke about the importance of change to make way for innovation:

“People have an enormous tendency to resist change. They love to say, ‘We’ve always done it this way.’ I try to fight that.”

Her own decision to join the Navy and push back against any pre-conceived notions about women in the military lead to some of most important military and technological advancements during her lifetime.

Saying she would be “bored stiff” if she stopped working entirely, Hopper took another job post-retirement and stayed in the computer industry for several more years. She was awarded the National Medal of Technology in 1991 – becoming the first female individual recipient of the honor.

Hopper’s story is one of inspiration but also of dedication. She used her passion to fuel her training and developed important skills that helped her become a leader in her industry. We want to share the same tenacity as Hopper. By bringing on experts with both passion and skill, our team is better equipped to decimate slavery and bring justice to those who need it most.