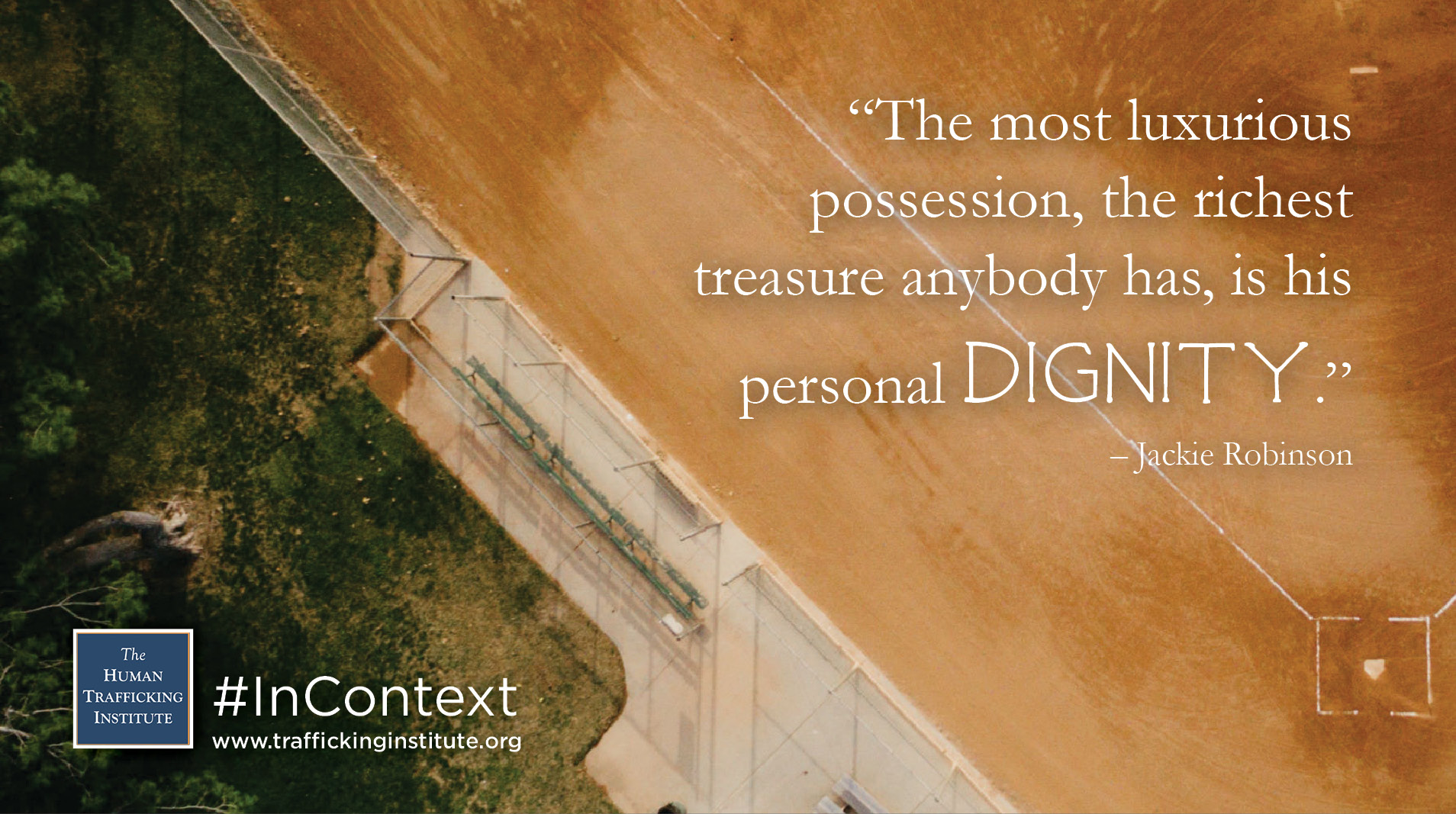 In 1947, at the age of 28, Jackie Robinson broke the color barrier in Major League Baseball when he was signed with the Brooklyn Dodgers – 58 years after the League was founded. Baseball’s unwritten rules of segregation were to change forever when Robinson was signed. In the decade after World War II and before the Civil Rights Movement in America peaked in the 1960s, Robinson became “baseball’s great experiment.”

Robinson’s professional baseball career (1947-1956) was memorable and exceptional. A standout second-baseman, he was regarded as being able to “hit and bunt and steal and run… [with] intimidating skills, burn[ing] with a dark fire.” He boasted a career .311 batting average and stole 197 bases, including home base 19 times. He played in six World Series (including winning in 1955), and received the first-ever Rookie of the Year award in 1947. He was a six-time All Star and became the first ever black MVP of the League in 1949 only two years after his debut in the MLB. In 1962, he was inducted into the Major League Baseball Hall of Fame.

When the manager of the Dodgers, Branch Rickey, decided to sign Robinson to his team, he carefully evaluated Robinson’s character, which would equip him for the challenging road ahead. Robinson’s commitment to nonviolence and graciousness in the face of threats to himself and his family made enormous impact as a leader both personally and professionally. He was ground-breaking as one of the first noteworthy public figures to use non-resistance to fight against racist structures in America.

In his autobiography, “I Never Had It Made,” Robinson recalls the conversation with Rickey about how much courage would be needed to break the color barrier in baseball. Robinson carefully considered how difficult it would be to turn the other cheek. Robinson writes:

“The most luxurious possession, the richest treasure anybody has, is his personal dignity.”

Robinson knew it would take “guts” to play the game and to not fight back when attempts were made to disregard or destroy his dignity. Rickey and Robinson’s goal of changing the racial tide in professional sports motivated Robinson deeply. He placed this above personal comfort, and in that way fostered true dignity through his actions as he fought for other black athletes and black Americans to be treated with respect.

Robinson’s inclusion in Major League Baseball “represented both the dream and the fear of equal opportunity, and would forever change the complexion of the game and the attitudes of Americans,” said Robert Lipsyte and Peter Levine in “Idols of the Game: A Sporting History of the American Century.” Robinson’s reputation and integrity combined with his indomitable talent on the field, in spite of a hostile environment – at times from his own teammates – led to his legendary and lasting influence on American life and culture.

After retiring from baseball, he continued to break barriers when he became the first black television analyst in Major League Baseball in 1965 and was later named Vice President of Chock Full o’Nuts, where he was the first black vice president of a major American corporation. He traveled across the United States, building morale amongst African Americans, who were fighting for social and racial justice in their own communities. He was a friend to Martin Luther King Jr. and helped campaign for civil rights in Alabama and Georgia in the 1960s. He helped raise funds to rebuild black churches that were burned and was on the board of the NAACP. Robinson was a posthumous recipient of the Congressional Gold Medal in 2005 and a recipient of the Presidential Medal of Freedom in 1984.

Jackie Robinson’s legacy and the end of racial segregation in Major League Baseball continue to be celebrated today – specifically on April 15, the date of his Major League debut. Since 2004, every April 15 has been deemed “Jackie Robinson Day,” in which all MLB players wear his universally-retired #42 jersey.

At the Institute, we strive to emulate Robinson’s commitment as a force for equality, peace, and justice in the face of violence and oppression. The environment in which many work to fight trafficking is difficult to navigate and many working to fight impunity may resonate with his desire to challenge the status quo. Let us work together to fight for dignity – the “richest treasure” – of all.