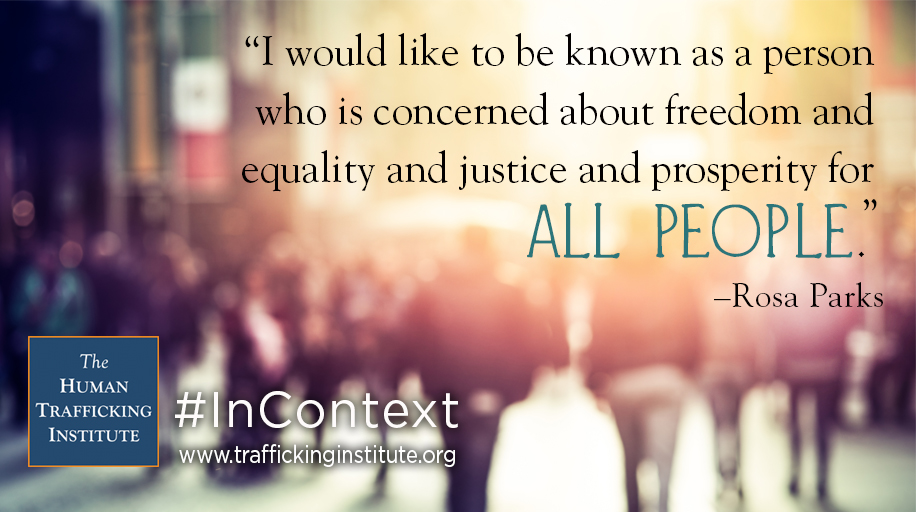 Rosa Parks was born on February 4, 1913, in Tuskegee, Alabama. At a young age, Parks’ parents separated. She and her mother moved in with her mother’s parents, who were former slaves. From a young age, she witnessed her family serve as leading examples and strong advocates for human equality. In one instance, her grandfather stood on their porch with a shotgun while Klu Klux Klan members marched down their street.

In Montgomery, Alabama, on December 1, 1955, Parks boarded the city bus as usual after a long day at work – sitting in the designated “colored” section. On the ride home, the bus became so full of passengers that at one point the driver noticed several white riders standing in the aisle. He stopped the bus and ask four black riders to give up their seats. Three complied, but Parks did not. The driver called the police and had her arrested. In many retellings of her story, Parks is depicted as physically tired, but that was not the case. As Parks herself stated in her autobiography, My Story,

“People always say that I didn’t give up my seat because I was tired, but that isn’t true. I was not tired physically, or no more tired than I usually was at the end of a working day. I was not old, although some people have an image of me as being old then. I was 42. No, the only tired I was, was tired of giving in.”

Parks’ arrest spawned a boycott of city busses. Members of the African American community were encouraged to stay off city busses on December 5, 1955, the day of Parks’ trial. When she arrived at her trial, she found a crowd of 500 supporters outside the courthouse rooting her on. Her arrest spurred an estimated 400,000 African American commuters in Montgomery to find another route to work or school that day. This day ignited a spark leading to more change with boycotts continuing for several months causing city busses to sit idle and impacting the city’s transit finances. This eventually caused so much strain on the city of Montgomery that the bus segregation laws were lifted over one year later on December 20, 1956.

A simple choice that Parks made on December 1, 1955, helped usher in the Civil Rights Movement. She remained seated before the “freedom riders,” before Martin Luther King Jr.’s “I Have a Dream” speech, and before the march in Selma. Parks did not have to say no to standing up, she could have complied, as the three others did. She could have easily ridden the bus home – standing – and had a typical evening after a long day of work. But she made a bold choice with courage and strength and bravery to stand up not only for herself, but for all African Americans who, like her, were being relentlessly shut down and mistreated. As Parks said on her 77th birthday,

“I would like to be known as a person who is concerned about freedom and equality and justice and prosperity for all people.”

She fought for dignity, equality, and justice. She fought to be heard, and on that day, she won that fight.

Today, slavery still exists. We must fight, as Rosa Parks did, for the freedom, equality, and justice of all people. It might be easy to sit idly by, but even small decisions to take action can spark generations of impact.