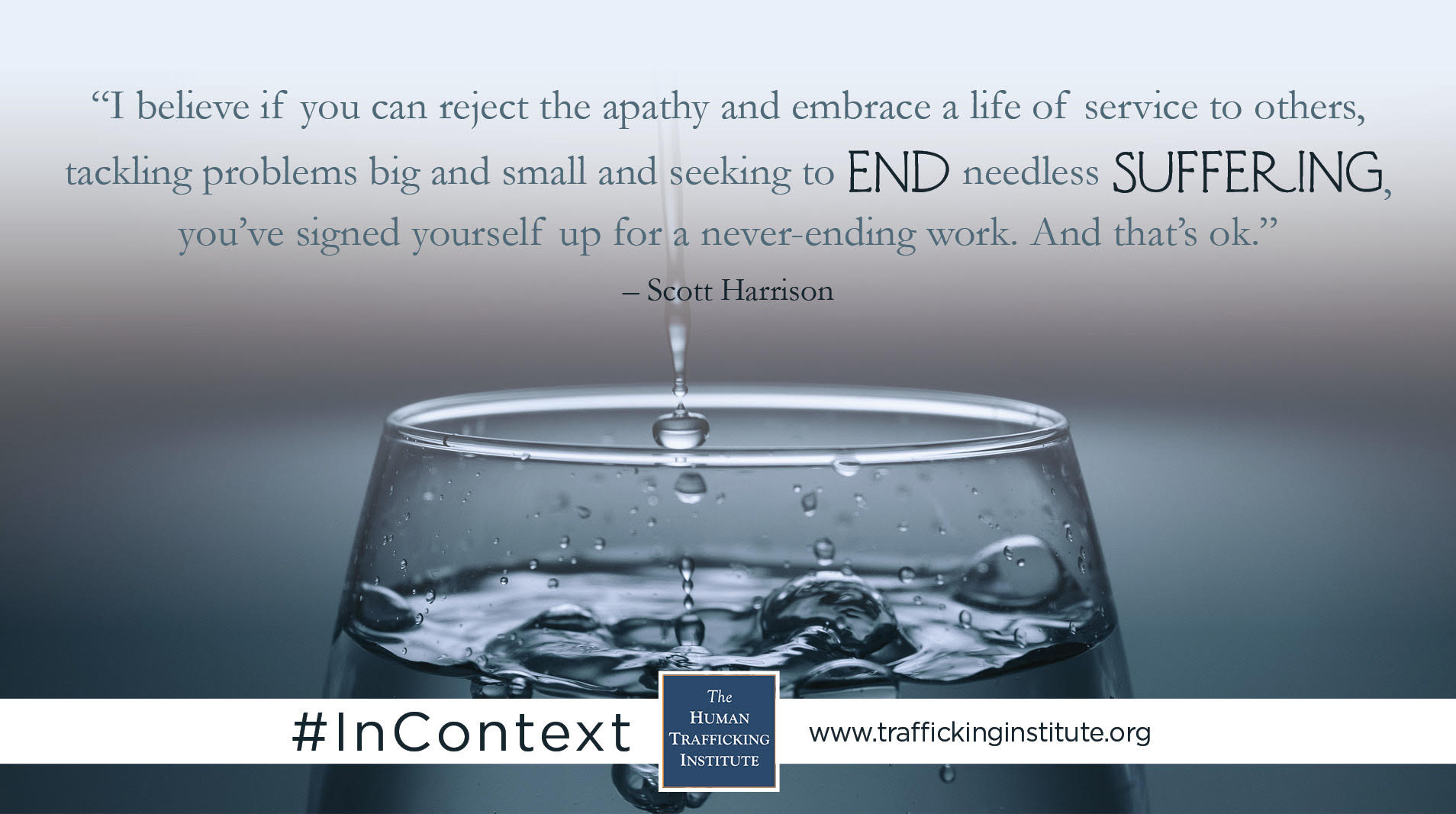 Today, Americans are fueled by checking off to-do lists and chasing an inbox count to zero. While busy schedules are marked by distinct start and end dates, Scott Harrison, founder and current CEO of the non-profit , encourages living outside this model.

In an interview with Brené Brown, Harrison explains the common and deep craving for completing finite tasks. However, by committing our lives to start and end dates, we miss out on being part of projects that are much bigger than checkboxes. He has been inspired by Avot De Rabbi Natan, who said “Do not be afraid of work that has no end,” leading to Harrison to his own mantra that drives his work with charity: water.

“I believe if you can reject the apathy and embrace a life of service to others, tackling problems big and small and seeking to end needless suffering, you’ve signed yourself up for a never-ending work. And that’s ok.”

A little over a decade ago, at 28, Harrison was apathetic to the world outside of New York City’s nightlife. As a nightclub promoter, his world revolved around smoking, drugs, models, hard drinking, and self-indulgence. (Over the span of 10 years, he worked at more than 40 night clubs.) However, on a vacation to South America, he realized he was the worst version of himself, leading him to ask: “What might it look like to serve others instead of myself?”

Six months later, he sold almost all of his possessions, and spent the next 16 months as a volunteer video journalist on a humanitarian medical mission in post-war Liberia, West Africa. Suddenly, other people were at the center of his world. He witnessed a broken, war-torn country without running water, sewage systems, or electricity, and watched young children drink from leech- and bacteria-infested ponds. Because he worked with the medical team, he noted the obvious correlation between many of the diagnosed diseases and contaminated water.

He witnessed how water has the power to draw a line between life and death. Inadequate water supply and sanitation are responsible for nearly half of all disease and infections in developing nations. Contaminated water sources are responsible for more death in the world than all forms of violence combined, including war. Harrison was in disbelief that something Americans take for granted is a matter of life and death for so many. This realization developed a thirst in Harrison: to quench the desperate need for clean water.

When he returned to New York City in 2006, he embraced a life of service and created the non-profit organization charity: water from his tiny apartment in Manhattan. The mission of charity: water is to bring clean and safe drinking water to people in developing countries.

Harrison acknowledges that one of the biggest problems when tackling such an issue is apathy and paralysis. Today, 663 million people around the world do not have access to improved water sources. That is 1 in 10 people. Harrison says, “When faced with something that feels so big, it’s easy for many people to embrace apathy, and ask themselves, “What could I possibly do about a problem that big?”

Harrison says, “What I love about the work we’re doing at charity: water is that the cause of clean water brings together people of all walks of life. Regardless of your politics or your religious beliefs, we all believe that no human being should die from bad water. Nobody should walk hours to a dirty swamp or muddy river only to bring contaminated water home to their family. Clean water is life’s most basic need.” Harrison calls us to sign up for never ending work, especially when we realize the rippling effect of a single drop of water.

Harrison has been recognized on Fortune’s 40 under 40 list, Forbes’ Impact 30 list, and ranked #10 in Fast Company’s 100 Most Creative People in Business. His new memoir, Thirst: A Story of Redemption, Compassion, and a Mission to Bring Clean Water to the World shares his story and the impact of charity: water.

Similar to charity: water, the Institute has signed up for what may feel like never ending work, but every day, we take steps that will build on each other and contribute to the fight against trafficking.