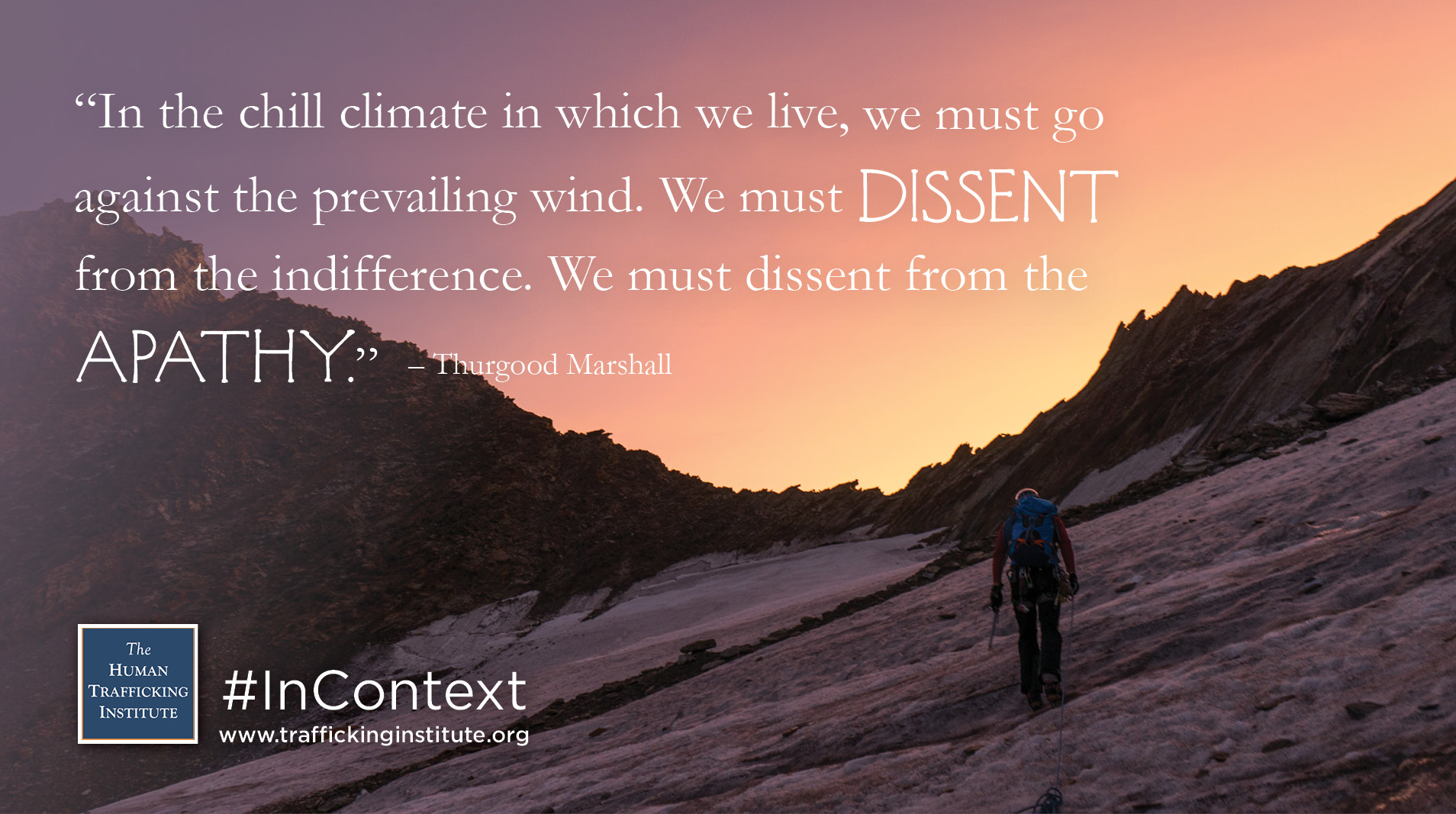 Thurgood Marshall’s unprecedented journey with the constitution began outside the classroom—a few feet outside the classroom, to be exact, where a mischievous young Marshall was often kicked out of class and forced to read the constitution as punishment. By the time he graduated High School—known today as Frederick Douglass High School — Marshall was fluent in the document’s teachings and well on his way to becoming one of the most influential constitutional lawyers in history.

Born in Baltimore, Maryland in 1908, Marshall’s childhood was marked by deep racial discrimination. The grandson of a slave, after whom Marshall was named, Marshall attended segregated schools and lived under the intense climate of inequality. His parents were deeply supportive of Marshall’s intellectual curiosity and raised him to be unabashed in his pursuit of knowledge and justice. On a rare day off from work, Marshall’s father would take him to watch legal arguments at the courthouse. His mother reportedly sold her wedding ring to help Marshall pay for law school.

Marshall was barred from attending The University of Maryland School of Law based on his race. He attended Howard University School of Law, graduated in 1933, and went on to successfully sue the University of Maryland for denying admission to another exceptionally qualified young black student. His early career continued to chip away at the foundations of state-sponsored educational discrimination, with subsequent litigation challenging teacher pay disparity and the lack of guaranteed education for black students beyond 6th grade.

After several years serving as the chief counsel for the NAACP, Marshall founded and became the first director of the NAACP’s Legal Defense and Educational Fund. In addition to his education litigation, Marshall traveled the country fighting for indigent clients who were subjected to, and falsely accused of, countless atrocities based on their race. His work often placed his own liberty and safety in jeopardy—like the time he was transiting through a small town in Mississippi, contemplating whether it would be safe to purchase a sandwich, and was threatened by a man carrying a gigantic pistol.

During his prolific civil rights career, Marshall argued 32 cases before the Supreme Court—winning a remarkable 29 of them. In the landmark case Brown v. Board of Education, Marshall successfully challenged the constitutionality of the longstanding “separate but equal” doctrine forming the basis for school segregation. In convincing the Court to outlaw segregation, Marshall secured the most significant legal victory in the history of educational discrimination.

President John F. Kennedy subsequently appointed Marshall to the U.S. Court of Appeals for the Second Circuit, where he issued more than 100 judicial opinions — not one of which was ever overturned by the Supreme Court. He went on to serve as the Solicitor General of the United States, where he won 14 of the 19 cases he argued before the high court.

In 1967, Marshall became the first black associate justice on the Supreme Court of the United States. He was known for respectfully but fervently advocating for his colleagues to recognize the deep-seated biases that permeated the legal system, arguing that they would never effectively eradicate injustice until they recognized the degree to which it was still present. Marshall was often referred to as “The Great Dissenter” based on his ardent opposition to decisions he viewed as infringing on his fellow citizens’ civil liberties.

Along with an unprecedented record of civil rights litigation, Marshall brought a unique levity and authenticity to the halls of the high court. His legal and analytic brilliance were often juxtaposed with his abiding unpretentiousness and fun-loving sense of humor. He was known for delivering some of the most consequential scholarly wisdom of the 20th century—and for greeting the notoriously formal Chief Justice Burger each morning with a playful, “What’s shaking, Chiefy Baby?”

In 1992, a year after retiring from the bench, Marshall was awarded the Liberty Medal for his work fighting for freedom and equality. In his speech, Marshall implored the audience—and future generations of advocates and leaders—to join the fight against an unjust status quo, saying:

Although Marshall is often heralded as the most consequential civil rights and constitutional lawyer of the 20th century, he remains an understated and lesser known hero of the civil rights movement. But those familiar with his work cherished his exceptional contributions to equality and justice. In honoring Marshall, Former Chief Justice William Rehnquist highlighted the famous inscription emblazoned on the front of the Supreme Court—‘Equal Justice Under Law’—and concluded, “Surely no individual did more to make these words a reality than Thurgood Marshall.” Marshall’s legacy as a steadfast and vigorous advocate for justice serves as an inspiration to all of us—and a humbling reminder of our duty to dissent from the indifference that so often allows injustice to prevail.