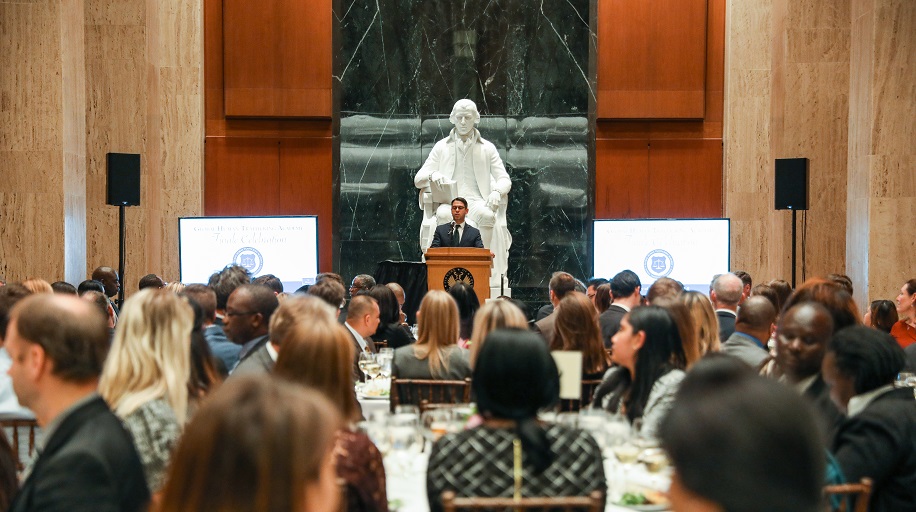 The Human Trafficking Institute marked the conclusion of its inaugural Global Human Trafficking Academy on October 26 with a finale dinner at the Library of Congress. Cohorts from Belize, South Africa, and Uganda came together with U.S. and international government officials, non-profit leaders, and Institute staff members to celebrate the success, collaboration, and hard work of the participants.

The Global Human Trafficking Academy was the first-ever event of its kind, allowing participants to immerse themselves in two weeks of intensive skills-based training. Each participant was presented with a graduation certificate during the dinner celebration. Victor Boutros, Institute CEO and Founding Director, opened the evening by highlighting the achievements of each cohort and inviting attendees to usher in a new era of change.

“Tonight is a celebration,” said Boutros. “It is the start of something new. If we witness a sea change in trafficking enforcement in Uganda, Belize, and South Africa it will be because of the criminal justice professionals sitting in this room. Most of the great movements of history began with a small group of dedicated and courageous leaders. But training is not an end in itself. It is only useful if it actually produces change. So in that sense, too, this is the beginning for these cohorts. They are leaving the Academy and entering the arena.”

Dave Rogers, Institute Director of Law Enforcement Operations, shared the ways in which the Academy will set the course of many years of work to come.

“It’s daunting to think about the impact of trafficking globally,” he acknowledged. “It is not only a human rights violation but also an economic crime. And because it is an economic crime, we can address it.”

Although prevalence estimates point to the fact that more slaves exist today than ever before, most estimates also point to the lowest percentage of the world’s population. Through targeted training events like the Global Academy, the Institute can work to advance change by empowering police and prosecutors through practical training.

“The Academy gave us an opportunity to talk with cohorts from Belize, Uganda, and South Africa and to workshop ideas in a safe space,” said Rogers. “Some of the work that we did was lecture and instruction, but most of it was interactive.”

Government leaders from Belize and Uganda were present as well, including Chief Justice Kenneth Benjamin (Belize), Commissioner of Police Allen Wylie (Belize), Director of Public Prosecutions Cheryl-Lynn Vidal (Belize) and Director of Public Prosecutions Justice Mike Chibita (Uganda). Both Chibita and Benjamin affirmed and thanked the Institute for hosting a groundbreaking training and paving the way for future collaboration.

“The list of challenges is endless. But this cannot stop us,” said Justice Chibita. “The Institute is in advanced negotiations regarding a specialized police unit. The Institute has helped us assemble a group of police and prosecutors and equipped them with the skills they need to do their work. This has been done during the recent Global Human Trafficking Academy. With the support of the Institute, we have been able to fight bottleneck and find possible solutions. We have great hope in the future.”

Tanima Kishore, Institute Special Counsel in Uganda, spoke highly of Justice Chibita’s work in Uganda and praised his leadership efforts. “Justice Chibita is a tremendous leader and an inspiring personality,” she said. “His partnership with the Institute has been extremely valuable. He has always treated the issue of human trafficking as one of his top priorities, I consider myself extremely lucky to be able to work with him.”

In the months ahead, the Institute will continue to follow up with the first class of Academy graduates to ensure that the training was clear and that any outstanding questions are answered.

“In the human trafficking arena, only the best is good enough,” said Justice Chibita. Together, with our partner countries, we are eager to see the work that our Academy cohorts will do in the coming months and years. 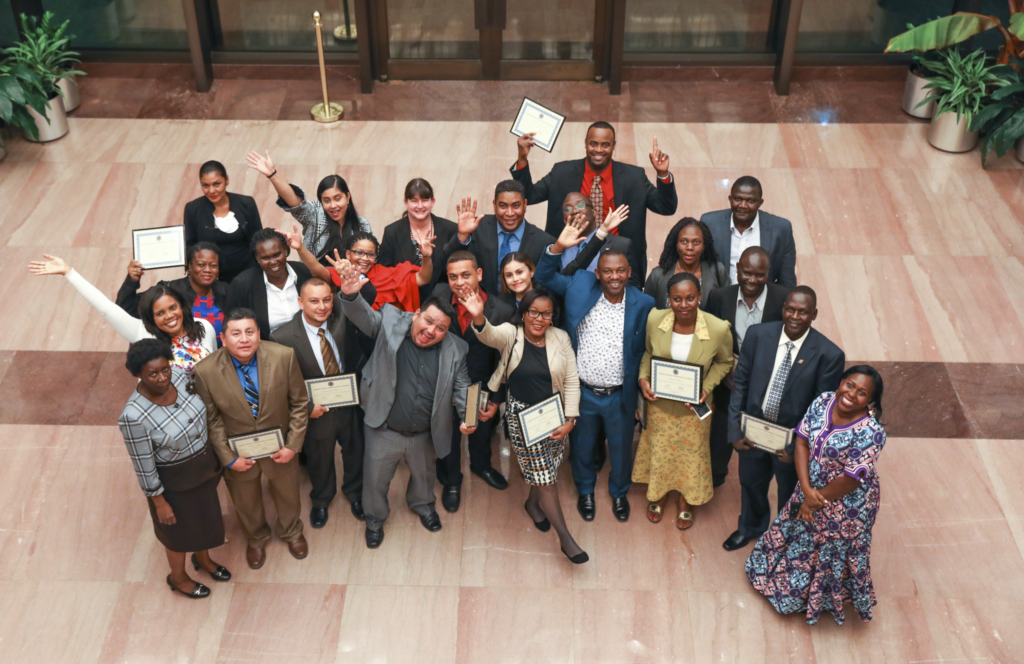 The Academy Cohorts pose for a photo with their Certificates of Completion.