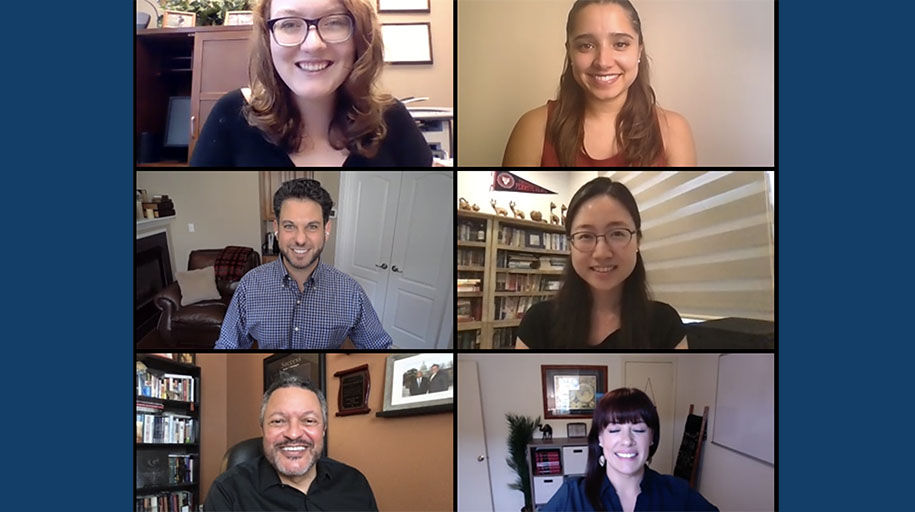 The Human Trafficking Institute welcomed it’s fourth class of Douglass Fellows with a virtual orientation on August 20-21. Four third-year law students from some of the nation’s top law programs will participate in the 8-month public service fellowship named in honor of Frederick Douglass and his commitment to freedom, education, and advocacy.

“The Douglass Fellowship provides exceptional law students with an incredible opportunity to engage in meaningful anti-trafficking work with mentorship from experts who will provide guidance as these students begin their legal careers,” said Lindsey Roberson, Senior Legal Counsel.

This year’s Fellows were selected based on their demonstrated academic ability, leadership potential, research and writing ability, and commitment to human rights and anti-trafficking efforts. They are:

“Sam” is a third-year law student at the University of Michigan Law School. She graduated Phi Beta Kappa from the University of Missouri with degrees in Political Science and English. Prior to law school, she received an MSc in International Conflict Prevention from Durham University in the United Kingdom as a Fulbright postgraduate scholar and worked as a Fellow at the American Constitution Society. In law school, she has served as the Editor-in-Chief of the Michigan Journal of International Law, a student attorney in the Human Trafficking Clinic, and an extern for a Geneva nonprofit, helping represent developing countries at the United Nations.

Johanna is a third-year law student at Harvard Law School, where she has been involved with the Harvard Human Rights and Business Student Association, HLS Advocates for Human Rights, the International Human Rights Clinic, and the Harvard Immigration and Refugee Clinic. She spent the summer after her first year of law school interning with Legal Support for Children and Women in Phnom Penh, Cambodia, helping address the issue of labor trafficking and exploitation of migrant workers in the fishing industry. This past summer, she provided direct legal services to survivors of human trafficking through her internship with Coalition to Abolish Slavery & Trafficking in Los Angeles. She holds a B.A. in Social Studies from Harvard College and a M.A. in Human Rights and Humanitarian Action from the Paris Institute of Political Studies.

Mirelle is a third-year law student at USC Gould School of Law, where she is a Public Interest Scholar. Before law school, she received her B.S. from Santa Clara University and worked for two years at the San Francisco District Attorney’s office as a victim advocate in the human trafficking and sexual assault units. In this role, she attended sting operations and provided on-site crisis intervention. In the summer after her first year of law school, she clerked at the Department of Justice’s Child Exploitation and Obscenity Section. She spent second year of law school working in the International Human Rights Clinic and serving as the President of the Barbara F. Bice Public Interest Law Foundation. In the summer of 2020, she worked as an Honors Clerk at the Santa Clara County District Attorney’s Office. In her free time, she plays for a USA club rugby team that holds three national titles.

Alicen is a third-year law student at William & Mary Law School in Williamsburg, Virginia. Prior to law school, she worked in various roles including child and elder care, teaching, and retail management. At William & Mary Law, she spent the summer after her first year of law school in Dhaka, Bangladesh, working with the Bangladesh Counter-Trafficking-in-Persons Project and last summer with the Department of Justice’s Human Trafficking Prosecution Unit. As a second-year law student she served as a staff member on the Journal of Race, Gender, and Social Justice, where she is serving again this year as a Notes Editor. She is the Co-Chair for the law school’s Public Service Fund, and volunteers as an intake coordinator for Justice for Military Families.

During the two-day orientation, Fellows learned about the specific work of the Institute as well as from outside experts in the field.

Keynote Speaker Kenneth Morris, Co-founder & President of Frederick Douglass Family Initiatives, led a conversation on Narrative of the Life of Fredrick Douglass as well as a dialogue on historical slavery and human trafficking.

“The more we know about our history, the more we can change our future,” Morris said. “I know [Frederick Douglass] would continue to speak truth to power. Use his voice, his pen, his vote to effect change.”

“I’m humbled and inspired by the many amazing professionals in the anti-trafficking space and legal field, including survivor advocates, who so generously share their time and expertise with the next generation of anti-trafficking leaders,” said Alyssa Currier, Institute Associate Legal Counsel and Douglass Fellowship Director.

A new element to this year’s program is that each fellow will work as a research assistant for an Institute attorney and will spend most of her time co-authoring one or two larger pieces of scholarship for external publication. “The goal is to contribute data-driven research to the anti-trafficking community and build the Institute’s profile as a thought leader,” Currier said.

Each fellow is also paired with an expert mentor who holds a senior position in a federal agency or nongovernmental organization working in the fight against human trafficking.

This year’s expert mentors are:

Another new component this year is alumni mentors. “Now that the Douglass Fellowship is in its fourth year, we are beginning to build an alumni network,” Currier said. “Based on feedback from past years, we’ve paired each current fellow with a former fellow, who will serve as a resource on fellowship assignments, as well as a sounding board for law school and post-grad goals and challenges.”

The alumni mentors are:

“After a successful virtual orientation, I’m encouraged and hopeful that—even without the in-person element—this year will be just as impactful as years past; maybe even more, considering the ways in which we’ve revamped the program,” Currier said.