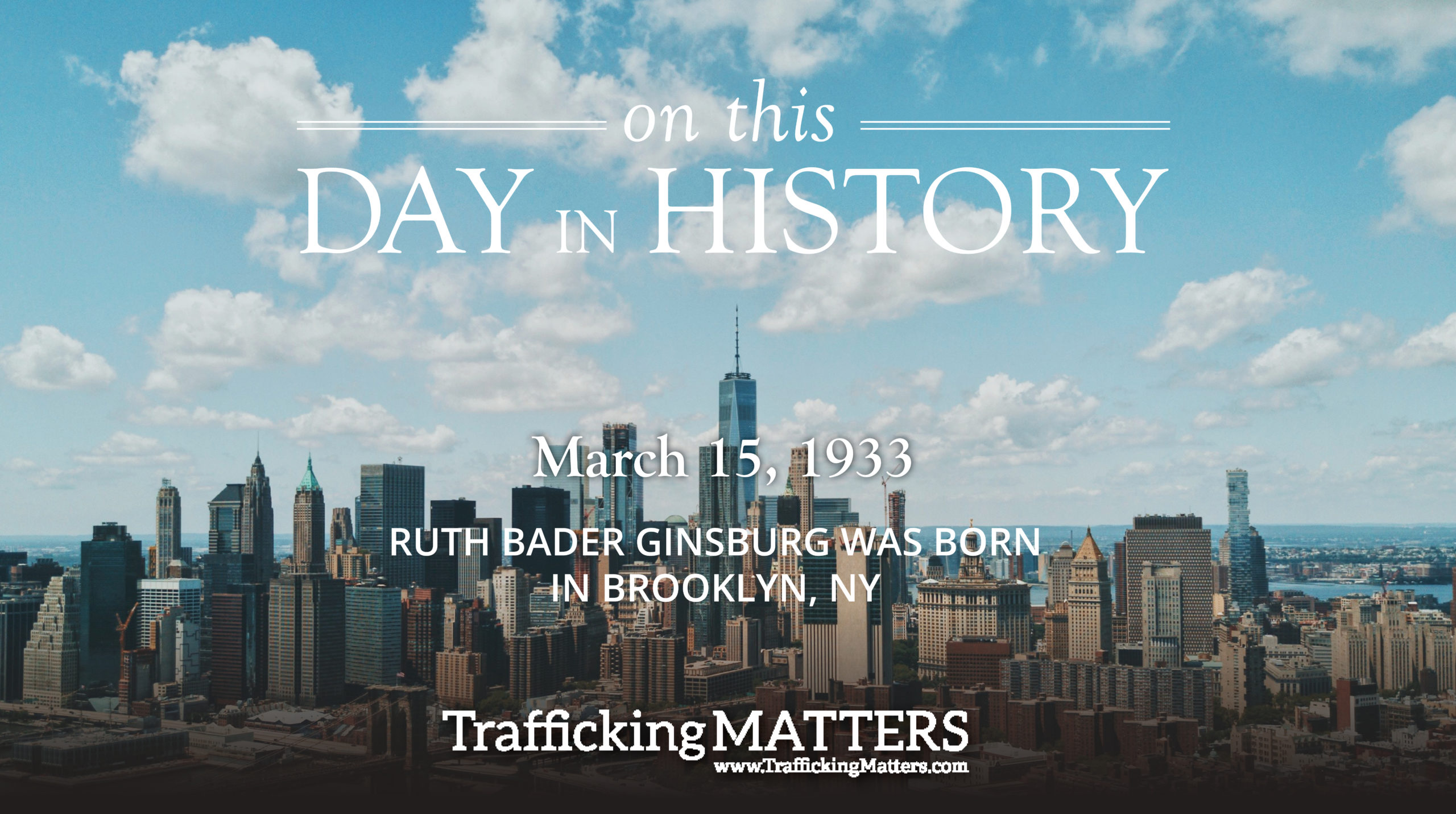 On This Day in History: Ruth Bader Ginsburg Was Born in Brooklyn, NY

On this day – March 15, 1933 – Joan Ruth Bader, later known as Ruth Bader Ginsburg, was born in Brooklyn, New York, during the height of the Great Depression.

Known for her barrier-breaking support of gender equality and worker’s rights, Ginsburg’s love of the law and for education began early, as she noticed the disparity between men and women grow larger as she got older.

Her father, Nathan Bader, was a furrier, and her mother, Celia Bader, worked in a clothing factory. From watching her mother sacrifice her own education in order to raise her family, Ginsburg gained a love for education. With the encouragement and help of her mother, Ginsburg excelled as a student at James Madison High School in 1950. Her mother, who had so greatly influenced her early life, died from cancer the day before her high school graduation ceremony. 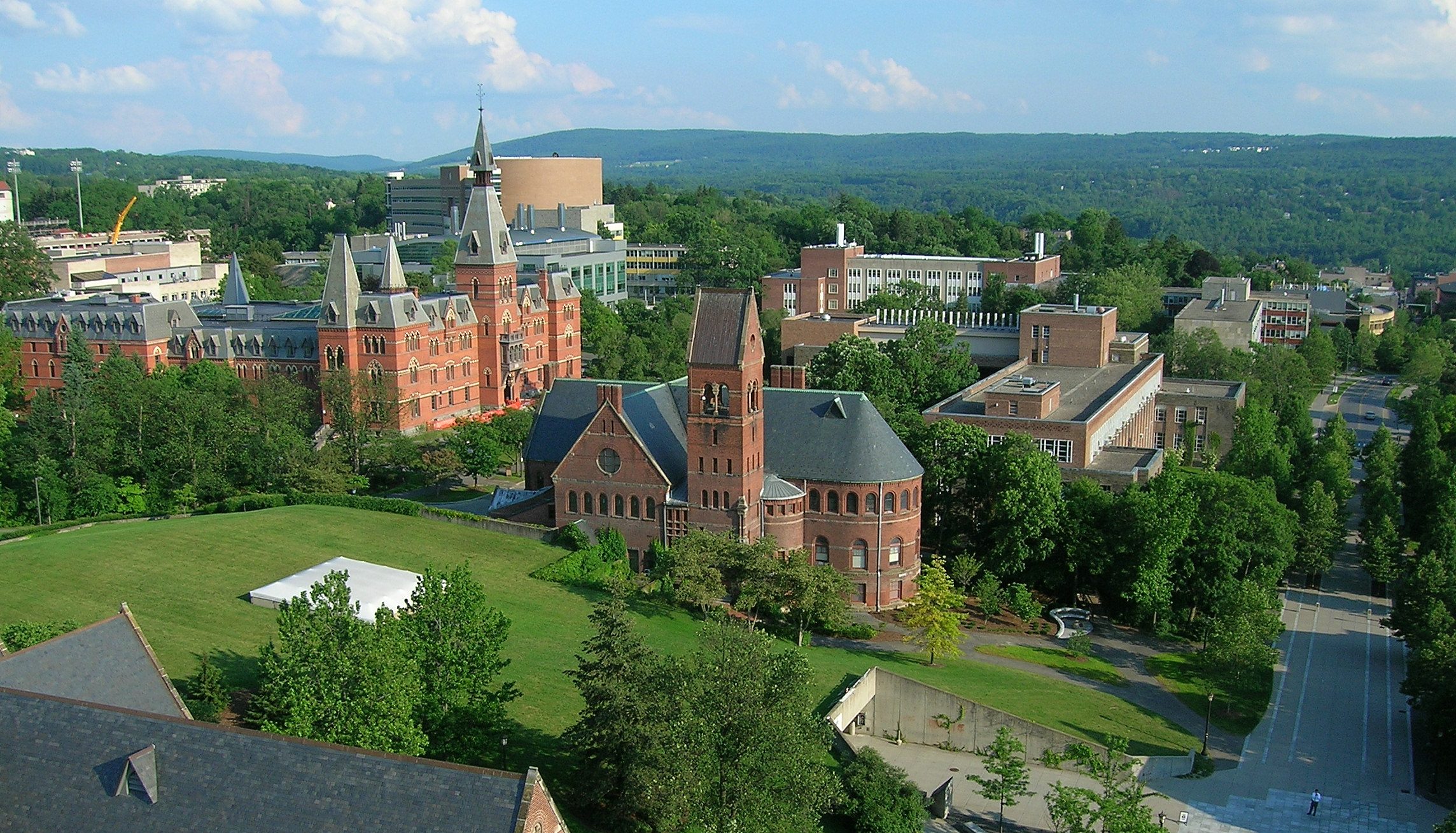 Ginsburg continued her education at Cornell University in Ithaca, New York, graduating Phi Beta Kappa, Pi Kappa Phi at the top of her class in 1954 with a Bachelor of Arts degree in government. Later that year, she married Martin Ginsburg, a law student who she met at Cornell. Soon after their marriage, the couple moved to Fort Sill, Oklahoma, where Martin was stationed as an officer in the U.S. Army Reserve. While living in Oklahoma, Ginsburg worked for the Social Security Administration, where she was demoted for being pregnant. So, she paused her career and gave birth to the couple’s first child, Jane, in 1955.

In 1956, after Martin finished his term in the military, Ginsburg enrolled at Harvard Law School as one of only nine women in a class with over 500 men. In a 2015 interview with The New York Times, Ginsburg recalls being asked by the Dean of Harvard Law, “How do you justify taking a spot from a qualified man?” Although she was embarrassed by the questions, Ginsburg was quick to offer what seemed to be a logical answer, “My husband is a second-year law student, and it’s important for a woman to understand her husband’s work.” 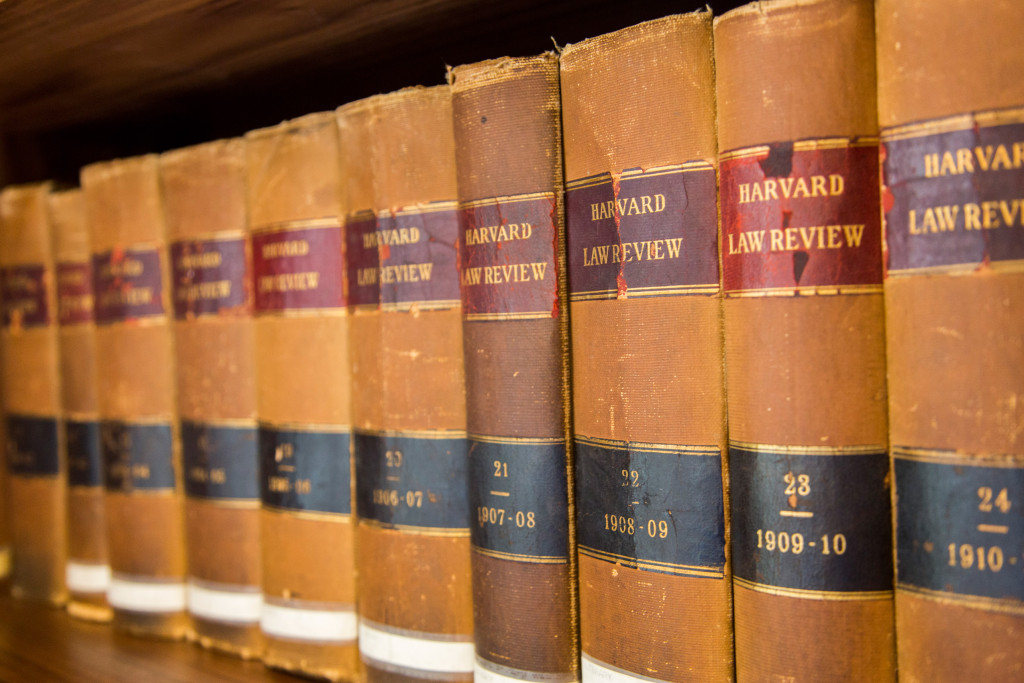 In 1958, Ginsburg transferred to Columbia University Law School, where she earned her Juris Doctor degree in 1959, tying for first in her class. Over the course of her college years, she became the first woman to be published in both the prestigious Harvard Law Review and Columbia Law Review.

Despite her distinguished legal and academic records, Ginsburg was still not immune to the gender-based discrimination that was rampant in the 1960s. Although she graduated at the top of her class, law firms, which normally welcomed talented graduates, refused to hire her. Armed with a powerful recommendation from a professor at Columbia, Ginsburg was finally hired by District Judge Edmund L. Palmieri in New York, where she worked as a law clerk until 1961.

After her successful tenure as a law clerk, Ginsburg began searching for full-time employment. She was offered positions at several law firms but was disappointed when discovering the salaries were most often considerably lower than those offered to her male counterparts for the same positions. In the end, she chose to join the Columbia Project on International Civil Procedure, a position which required her and her family to live in Sweden in 1961 in order for her to do research for her book on Swedish Civil Procedure practices.

After returning to the States in 1963, where she taught at Rutgers University Law School. Her son, James, was born in 1965. Shortly thereafter, she accepted a full-time professorship at Columbia University Law School in 1972. On her way to becoming the first tenured female professor at Columbia, Ginsburg led the Women’s Rights Project of the American Civil Liberties Union (ACLU). In this role, she argued six women’s rights cases before the U.S. Supreme Court from 1973 to 1976, winning five of them and setting legal precedents that would lead to significant changes in the law as it affects women. 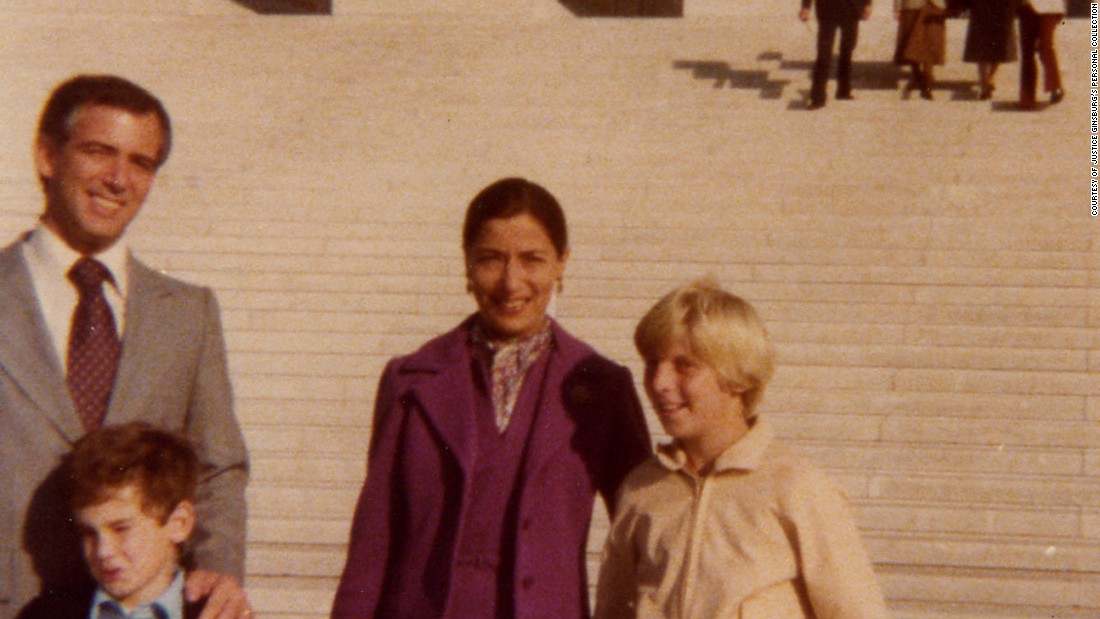 On April 14, 1980, President Jimmy Carter nominated Ginsburg to a seat on the United States Court of Appeals for the District of Columbia. With her nomination confirmed by the Senate on June 18, 1980, she was sworn in later that day. She served until August 9, 1993, when she was officially elevated to the United States Supreme Court.

Ginsburg was nominated as an Associate Justice of the Supreme Court by President Bill Clinton on June 14, 1993, to fill the seat vacated by the retirement of Justice Byron White. As she entered her Senate confirmation hearings, Ginsburg carried with the American Bar Association’s Standing Committee on the Federal Judiciary’s “well-qualified” rating – its highest possible rating for prospective justices. The full Senate confirmed her nomination by a vote of 96 to 3 on August 3, 1993, and she was sworn in on August 10, 1993. 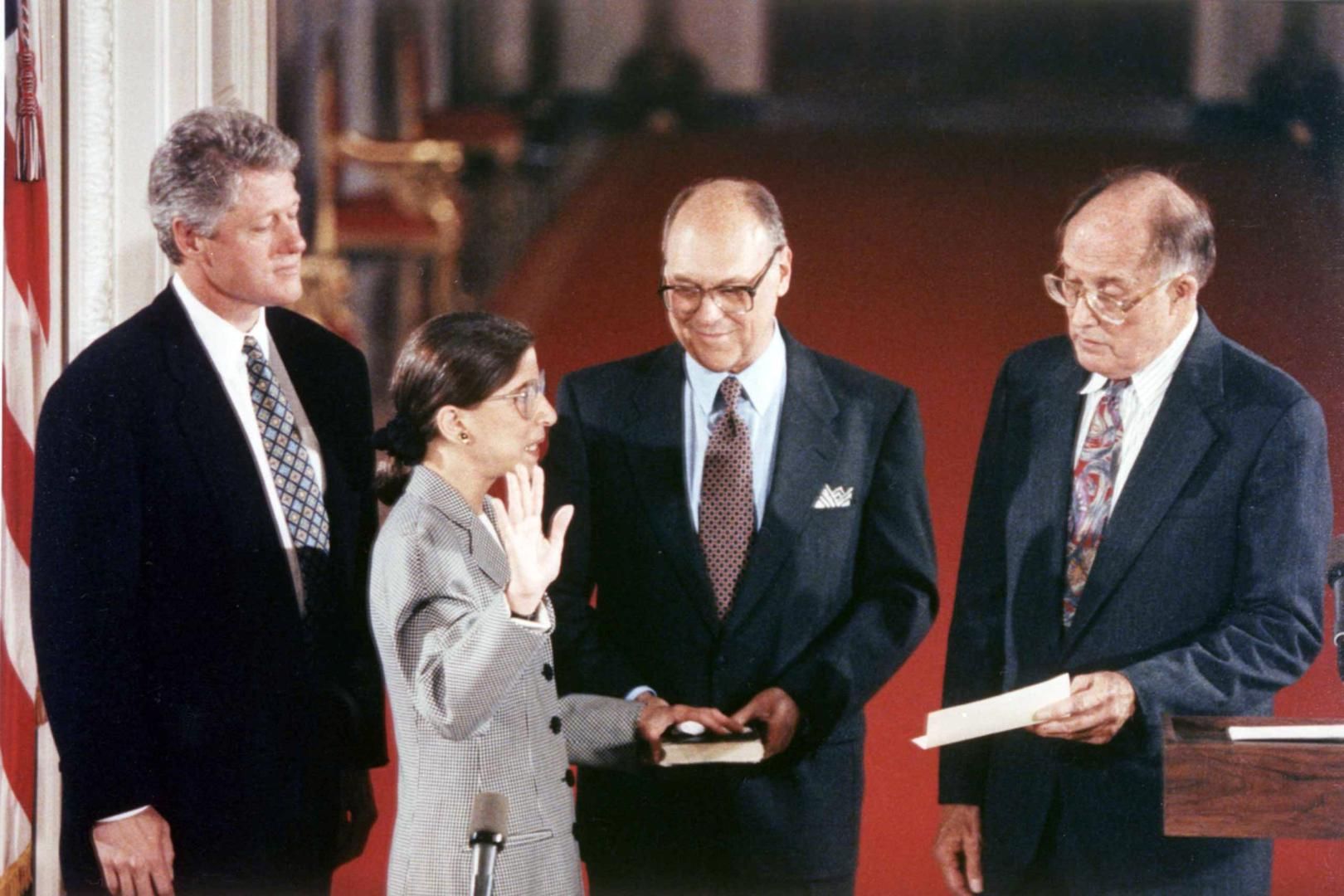 Over the course of her tenure on the U.S. Supreme Court, some of Ruth Bader Ginsburg’s written opinions and arguments during deliberations on landmark cases have reflected her lifelong advocacy for gender equality and equal rights. In United States v. Virginia, Ginsburg wrote the Court’s majority opinion holding that the previously male-only Virginia Military Institute could not deny admission to women based solely on their gender. In the case of Olmstead v. L.C., Ginsburg wrote the Court’s majority opinion holding that under Title II of the 1990 Americans with Disabilities Act, persons with mental disabilities have the right to live in the community rather than in institutions if medically and financially approved to do so.

Following Justice Sandra Day O’Connor’s retirement in 2005, and subsequent replacement by Samuel Alito, Justice Ginsburg became for a time the only female member of the Supreme Court. In 2010, Martin Ginsburg passed away from cancer. He is buried at Arlington National Cemetery. Justice Ginsburg frequently cites their marriage as an inspiration for her work. In recent years she has welcomed not one but two new female members of the Court, Justices Sonia Sotomayor and Elena Kagan. Despite frequent rumors of her retirement, she shows no signs of flagging in her commitment to her duties. Through all the challenges and losses she has overcome, Justice Ginsburg has remained steadfast, as an impassioned educator and advocate, and as a thorough and impartial jurist.