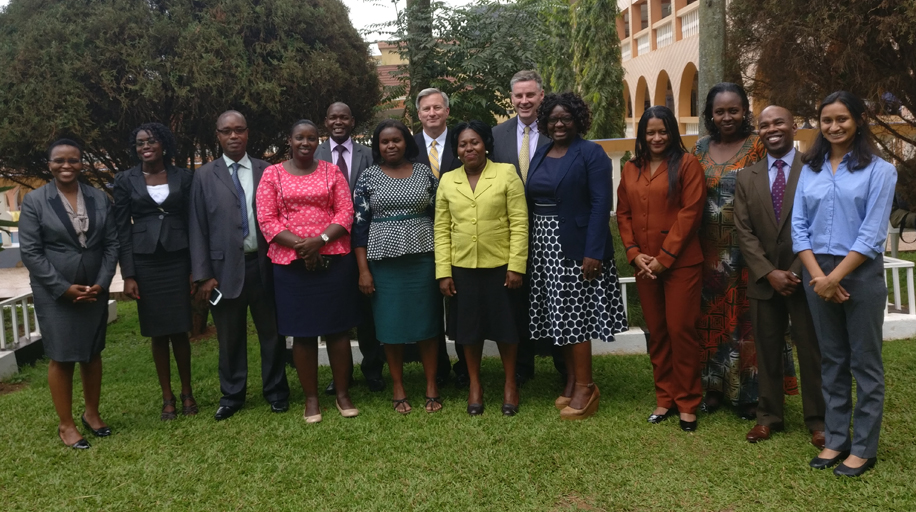 KAMPALA, UGANDA — Institute Founding Director John Richmond and Director of Law Enforcement Operations Dave Rogers recently conducted a specialized training with the Ugandan Office of the Director of Public Prosecutions (ODPP). The ODPP is the Ugandan government agency that handles and prosecutes criminal cases. Ten ODPP prosecutors attended the training including state attorneys and members of the International Crimes, and Gender, Children and Sexual Offences departments.

The two-day event, held Oct. 5-6, focused on identifying common challenges when prosecuting Trafficking in Persons (TIP) cases and brainstorming the best ways to overcome those challenges. Additionally, a Ugandan trafficking survivor spoke on her experience with law enforcement and prosecutors and on cultivating a survivor-centered approach to TIP prosecution.

The Institute also introduced Tanima Kishore at the training. Kishore will be moving to Kampala in November to continue the Institute’s operations in Uganda. She will be embedded within the ODPP as a Special Counsel to assist on all trafficking cases in Uganda.

In the 2017 Trafficking in Persons Report, released annually by the U.S. Department of State, Uganda was classified as a “Tier 2” country, stating it “does not fully meet the Trafficking Victims Protection Act’s minimum standards but is making significant efforts to bring themselves into compliance with those standards.” This training is one of multiple ways the Institute is helping empower the Ugandan government’s efforts to continue making significant efforts and to fight trafficking in their country.