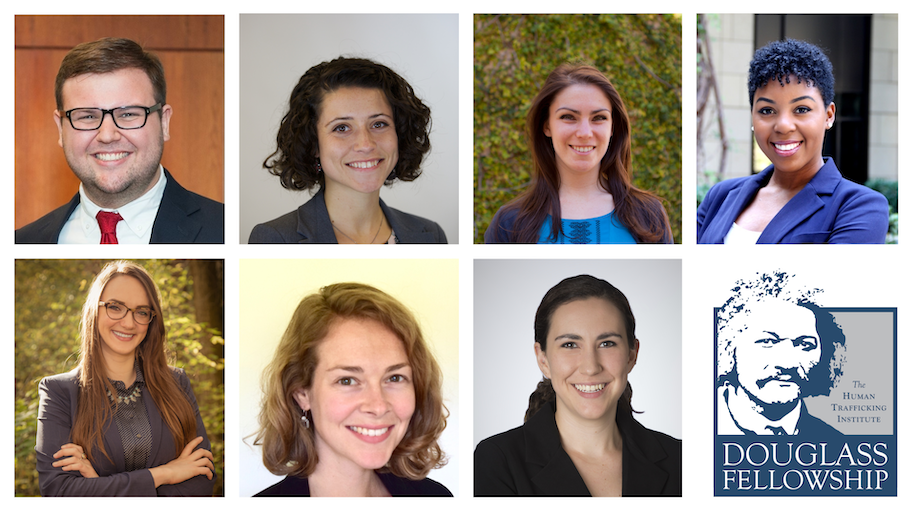 This September, the Human Trafficking Institute will welcome seven students from some of the nation’s top law programs for the 2019-20 Douglass Fellowship class. This 8-month public service fellowship is named in honor of Frederick Douglass and his commitment to freedom, education, and advocacy.

The Douglass Fellowship provides exceptional law students a unique opportunity to utilize what they are learning in the classroom and engage with the Institute’s mission to decimate modern slavery at its source. Throughout the year, Fellows will complete research and writing projects, participate in advocacy events, and work closely with program mentors.

This year’s Fellows class was selected based on their demonstrated academic ability, leadership potential, research and writing ability, and commitment to human rights and anti-trafficking efforts. They are:

Zachary Buchanan – Harvard Law School
Zach is a third-year law student at Harvard Law School. He graduated from Mississippi State University in 2017 with a degree in Psychology. As an undergraduate student, Zach spent time researching how to effectively interview children with histories of trauma. At Harvard Law, Zach serves as an editor with the Civil Rights—Civil Liberties Law Review, a producer of the HLS Parody musical, and a Co-President of the Christian Fellowship. He has also done clinical internships with the Suffolk County DA’s Human Trafficking and Child Protection Units, as well as with the Capital Habeas Unit at the Federal Public Defender for the District of Nevada. He spent his 1L summer with the DOJ’s Child Exploitation and Obscenity Section and his second year summer with Paul Hastings LLP in Washington, D.C.

Rachel Geissler – University of North Carolina Law School
Rachel is a third-year law student at the University of North Carolina School of Law in Chapel Hill. After graduating from Indiana University Bloomington with degrees in Spanish and Anthropology, she worked in Mexico for one year as a Fulbright English Teaching Assistant. She then joined the staff of the National Immigrant Justice Center in Chicago as a paralegal, providing direct legal services to immigrants seeking humanitarian relief. Since beginning law school, Rachel has interned with Legal Aid of North Carolina’s Farmworker Unit and the Southern Coalition for Social Justice’s Youth Justice Project. As a second-year student, she was a staff member on the North Carolina Law Review and the recipient of the ACLU of North Carolina’s Pollitt Fellowship. This coming year, she will represent clients in civil rights and economic justice cases through UNC’s Civil Legal Assistance Clinic.

Gabrielle McKenzie – Stanford Law School
Gabrielle is a third-year law student at Stanford Law School. She graduated magna cum laude from the California State University at Long Beach in 2016 with a dual degree in Sociology and Linguistics. She then remained at her undergraduate institution for one year to work as an Academic Advising Specialist in the Liberal Arts department. Since starting law school, Gabrielle has been active in the Stanford Black Law Students Association, Stanford Journal of Civil Rights & Civil Liberties, Women of Color Collective, Workers’ Rights Pro Bono, International Law Society, Youth and Education Advocates, and Women of Stanford Law. She also fought for human rights last spring in Stanford’s International Human Rights and Conflict Resolution Clinic. Prior to the clinic, she participated in a Human Trafficking Field Study in Thailand, where she learned about human trafficking in the Thai and global contexts. Gabrielle has interned at Legal Aid at Work in San Francisco and Debevoise & Plimpton LLP in New York. She hopes to continue working with human rights organizations to end human trafficking and similarly heinous human rights abuses around the world.

Faith Laken – University of Chicago Law School
Faith is a third-year law student at the University of Chicago Law School. She graduated from the University of Chicago with a BA in political science and a focus on international and human rights issues. She then worked in social science research, politics in Wisconsin, and as a paralegal in immigration before returning to the University of Chicago for law school. After her 1L year, Faith interned with the Department of Justice. She spent her second year summer at the Department of State in the Office of the Legal Adviser in D.C. and with the Legal Counsel to the U.S. Embassy in The Hague in the Netherlands. At the Law School, Faith served as president of the Human Rights Law Society and on the Pro Bono Board, Law Women’s Caucus, and the Chicago Journal of International Law. She has also volunteered as a domestic violence and sexual assault advocate and worked on projects related to both sex and labor trafficking in Minnesota. After graduation, Faith will be clerking on the Ninth Circuit Court of Appeals and then on the California Supreme Court.

Emmylou Manwill – Boston University School of Law
Emmylou Manwill is a third-year law student at Boston University School of Law, where she is also earning a graduate certificate in Women’s, Gender, and Sexuality Studies. Last year, Emmylou assisted survivors of labor and sex trafficking with a range of civil legal needs as a Student Attorney in the Immigrants’ Rights and Human Trafficking program. She also co-wrote a bill standardizing crime victim certification protocols across the Commonwealth of Massachusetts, aimed at assisting survivors of crime and trafficking who would like to apply for U & T non-immigrant status. She has previously interned as a Legal Advocate at the Boston Area Rape Crisis Center and as an Immigration Legal Fellow at DOVE, a domestic violence agency in the greater Boston area. Passionate about gender-based issues, Emmylou was the President of If/When/How: Lawyering for Reproductive Justice and Alumnae Chair for the Women’s Law Association. Emmylou is also an Article Editor on BU’s International Law Journal and an active member of the Student Planning Committee for BU Law’s annual Public Interest Retreat. Prior to attending law school, Emmylou was the Visitor Services Manager at the Utah State Capitol for nearly three years, where she worked to ensure every person felt welcome in the “People’s House.” She has served on several boards including the Utah Coalition Against Sexual Assault, the Young Women’s Council of YWCA Utah, and the Salt Lake County Women’s Caucus. Hailing from the base of the Rocky Mountains, Emmylou graduated cum laude with dual undergraduate degrees in Political Science and Honors International Studies and a minor in Economics from the University of Utah.

Ashleigh Pelto – University of Michigan Law School
Ashleigh is a third-year law student at the University of Michigan Law School. She graduated from Grand Valley State University (GVSU) with a degree in secondary English education. While at GVSU, Ashleigh served as the secretary of her campus’ International Justice Mission chapter. She also volunteered with The Manasseh Project, a safe house for teenage victims of sex trafficking. While in law school, Ashleigh served as Chair of the law student organization Human Rights Advocates, as an Article Editor on the Michigan Journal of Gender & Law and worked on the pro bono Syrian Accountability Project. She has served as a summer intern for both the United States Attorney’s Office for the Western District of Michigan and the Boston Federal Defender Office. Ashleigh hopes to work on human trafficking litigation and policy reform to curb demand, bring about prevention, and facilitate awareness in the public of the realities of this crime.

Rachel Ungar – Georgetown University Law Center
Rachel Ungar is a third-year student at the Georgetown University Law Center, where she serves as a Public Interest Fellow and Senior Notes Editor on the Georgetown Immigration Law Journal. She holds a B.A. in History from the University of California, Santa Cruz, graduating with honors. After studying abroad in Argentina, Rachel worked on refugee policy issues at a NGO in Buenos Aires. Upon returning to the U.S., she worked for several law and policy centers at Stanford Law School for several years. During this time, she became deeply involved in several organizations focused on fighting human trafficking through providing direct services to survivors, advocating for legislative and policy reform, and fostering international development in countries such as Moldova. After finishing her 1L year at Georgetown, Rachel interned for the ACLU of Hawaii, where she drafted demand letters and legal memoranda, revised advocacy materials, and worked to find a willing plaintiff to help stop the forced labor of foreign workers in Hawaii’s fishing industry. She continued to investigate allegations of forced labor in this as a second year law student through the Georgetown Human Rights Fact-Finding Practicum. As part of the practicum, Rachel helped to conduct vigorous fieldwork and stakeholder interviews, publish a fact-finding report, and engage in related advocacy. Over the 2018-19 academic year, she also served as a Law Fellow at Shared Hope International, where she conducted in-depth analyses of state laws pertaining to domestic minor sex trafficking.

“We are thrilled to have another incredibly gifted group of Douglass Fellows,” said Victor Boutros, Institute CEO. “They come from some of the top schools in the country and have already demonstrated a commitment to combatting trafficking. We are encouraged to see these future leaders stepping into this field with such a commitment to excellence, and we are excited to see them use their skills to advance the Institute’s mission.”

The 2019-20 Douglass Fellowship begins with a two-day orientation on September 5-6 in Washington, D.C., where the fellows will learn about the Institute’s vision and model for combatting trafficking and receive an introduction to their research projects. During their orientation, the Fellows will also meet their mentors – all of whom hold senior positions in federal agencies and nongovernmental organizations – who work in the fight against human trafficking.

“Mentorship is one of the most rewarding aspects of the Douglass Fellowship program,” said Kyleigh Feehs, the Institute’s Associate Legal Counsel. “In a world where connections have become increasingly important, the Douglass Fellowship provides a unique opportunity for passionate and bright law students to gain insight and seek advice from leaders on the front line of anti-trafficking efforts. We are greatly encouraged by the collective level of expertise from this years’ mentors, and we are excited to facilitate the beginning of these pivotal relationships.”