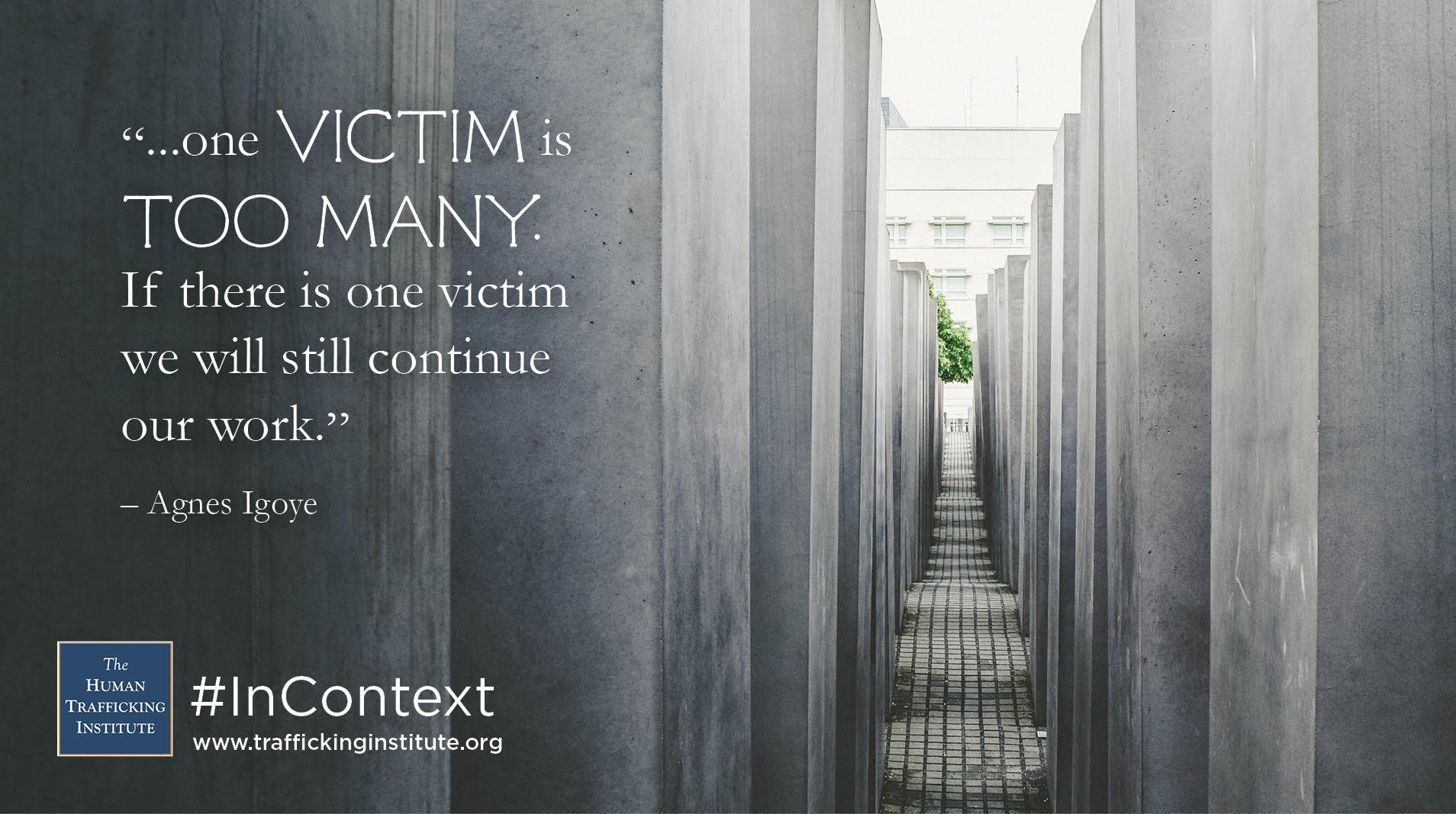 Today, there are an estimated 24.9 million victims of human trafficking; that is about three times the population of New York City. While it is important to grasp the millions of lives in this vicious cycle, Agnes Igoye fights for each individual.

In an interview with Vital Voices, a non-profit organization that works with women leaders in economic empowerment, political participation, and human rights, Igoye said,

“We’ve come to terms that we have this huge problem. We are not quite there, and it is still a struggle because one victim is too many. If there is one victim we will still continue our work.”

Igoye, Head of the Immigration Training Academy and Deputy National Coordinator for the Prevention of Trafficking in Persons in Uganda, is a prominent leader in the fight against trafficking today.

She was born on March 8, 1972. Human rights made an imprint on her life from an early age as she and her family were affected by the Lord’s Resistance Army (LRA), a Ugandan rebel group that originated in 1987. The LRA abducted and killed thousands of civilians throughout the country, primarily in Northern Uganda, and in remote and neighboring regions of Central African Republic, Democratic Republic of Congo, and South Sudan. Igoye recalls young girls were specifically targeted because of their virginity and were abducted by the LRA for use as sex slaves. Young boys were abducted and forced to be soldiers. The terror of the LRA eventually forced her family to flee to an internally displaced persons camp at a convent when she was a teenager.

Despite the early years of her family’s extreme turmoil, Igoye was determined to use educational opportunities to enact change. She received her undergraduate and master’s degree from Makerere University in Kampala, Uganda, and joined Uganda’s Ministry of Internal Affairs as an immigration officer starting in 1996. She continued her educational pursuits at the University of Minnesota as a Fulbright Hubert Humphrey Fellow in 2010-2011, and the University of Oxford, where she studied forced migration. In 2017, she graduated from Harvard Kennedy School as a Mason Fellow in the Mid-Career/Master in Public Administration Program. Her recognitions include New African Magazine’s 100 most influential Africans in 2015, the 2016 Diane von Furstenberg International Award, University of Minnesota’s Distinguished Leadership Award for Internationals, and the 2017 Clinton Global Initiative University Alumni Honor Roll.

Igoye’s continued work in Uganda’s Ministry of Internal Affairs is what exposed her to trafficking at the Ugandan border. She witnessed trafficking and transnational organized crime up close and was troubled by the lack of enforcement by the government. After bringing this to the attention of the Minister of Internal Affairs, he appointed her as the first trainer to help immigration officers identify these violations. She believed officers could play a large role in getting to the root of trafficking and protecting survivors who were moving in and out of the country. She was the first female officer to hold an immigration command post. She has taught nearly 2,000 new recruits how to identify traffickers and victims, and she has developed Uganda’s anti-trafficking efforts to meet international standards. Today, Igoye serves as the deputy to Moses Binoga, who heads Uganda’s Coordination Office for the Prevention of Trafficking in Persons and was recognized as a TIP Hero by the U.S. Department of State in 2015.

Igoye notes there is still more work to be done. The 2019 U.S. Department of State Trafficking in Persons Report placed Uganda on Tier 2 for the seventh year in a row. Tier 2 rankings are given to “countries whose governments do not fully meet the TVPA’s minimum standards but are making significant efforts to bring themselves into compliance with those standards.”

In Igoye’s eyes, one victim is enough to keep fighting and to fight harder. She believes the call to action lies in more prosecutions. “We need to send that message to traffickers,” she said. Igoye highlights the power a victim holds and shares that when victim assistance is provided, a well-supported victim-survivor can provide unmatched help in this fight to prosecute traffickers and decimate human trafficking.

Today – October 23, 2019 – marks 10 years since Uganda authorized their Prevention of Trafficking in Persons Act (PTIP), which prohibited all forms of human trafficking and prescribed punishments up to life in prison.