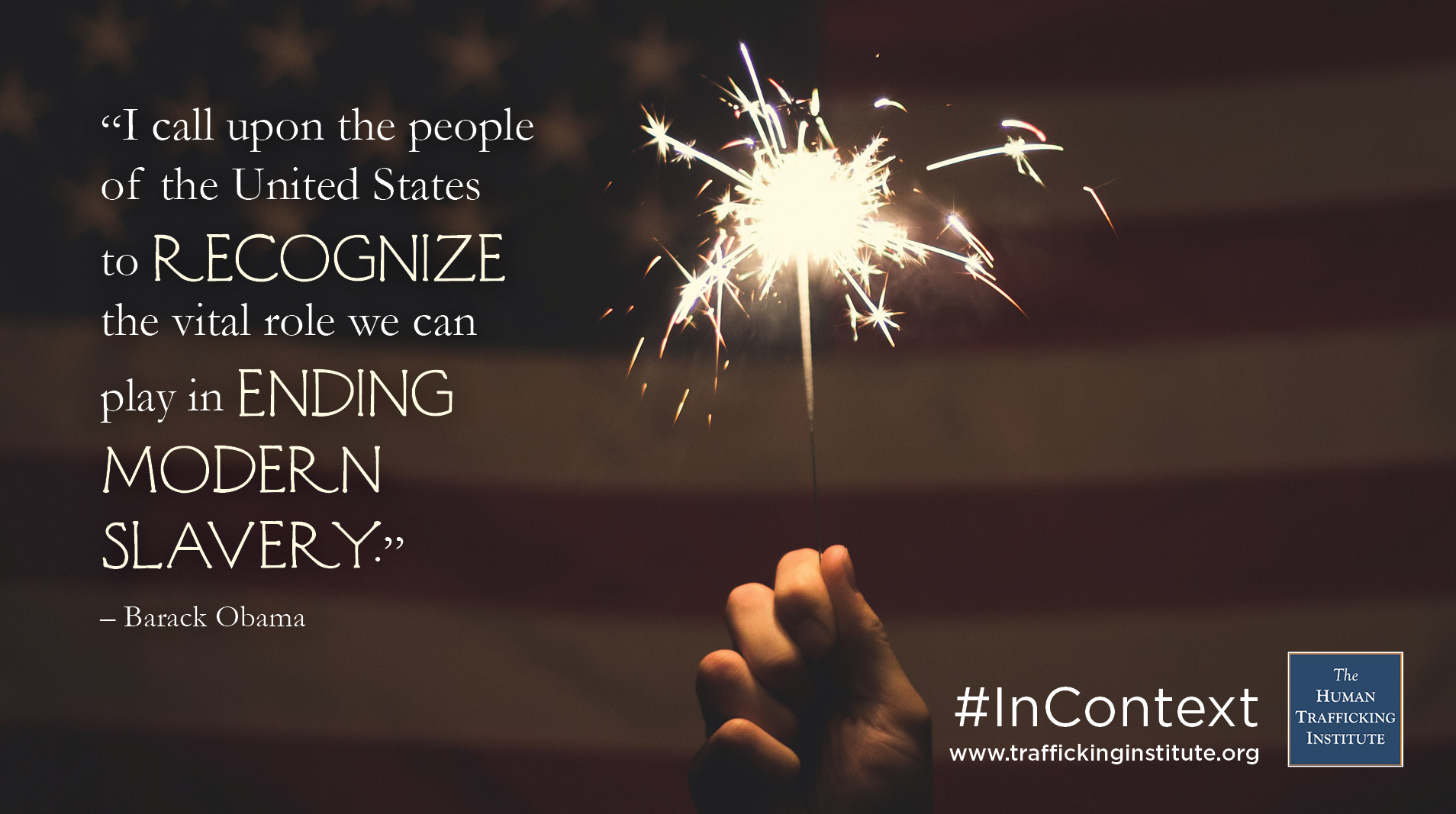 “I call upon the people of the United States to recognize the vital role we can play in ending modern slavery.”

By marking this month 10 years ago, Obama encouraged Americans to let go of assumptions about slavery and human trafficking, and rather “join together as a nation and global community to provide that safe haven by protecting victims and prosecuting traffickers.”

“Fighting modern slavery and human trafficking is a shared responsibility,” he said. “This month, I urge all Americans to educate themselves about all forms of modern slavery and the signs and consequences of human trafficking. Together, we can and must end this most serious, ongoing criminal civil rights violation.” In this speech, he traces this call to action back to the United States’ founding principle: “all people are born with an unalienable right to freedom – an ideal that has driven the engine of American progress throughout our history.”

Throughout the nation’s history, January has often carried a message of freedom. In 1808, the federal ban on the transatlantic slave trade went into effect on New Year’s Day. Fifty-five years later, President Abraham Lincoln issued The Emancipation Proclamation, on January 1, 1863, declaring “that all persons held as slaves are, and henceforward shall be free.” More than 150 years later, Obama’s words connect to Lincoln’s, calling Americans to recognize their own privilege of freedom and to also recognize their responsibility to fight for the freedom of others.

Between 2000 and 2010, the time of Obama’s Presidential Proclamation, the United States made significant strides to combat human trafficking. Between 2001 and 2007, the U.S. Department of Justice prosecuted 360 defendants and gained 238 convictions. Between January 2008 and 2010, the FBI investigated 2,515 suspected incidents of human trafficking in the United States, clear evidence this crime was active and growing within the United States. According to the 2010 Trafficking in Persons Report released by the U.S. Department of State, in FY 2009 alone, the Human Trafficking Prosecution Unit charged 114 individuals and obtained 47 convictions, representing the highest number of prosecutions and defendants charged in a given year at that time.

Since 2010, reauthorizations of the TVPA have continued to hinder traffickers and protect victims. In 2013, the reauthorization established the Child Protection Compact program by entering into agreements with countries to provide technical and financial assistance to eradicate the exploitation of children. It also substantiated the relationship between state and local law enforcement to ease charging and prosecuting traffickers.

While there are policies in place to protect victims and to increase prosecutions, Obama’s call to action reminds American citizens that they have a role in this fight.

Individuals throughout the country have a role in the fight, whether identifying a victim, offering medical and/or social services, serving as a first responder, increasing public awareness, or supporting those on the front lines. Obama’s proclamation urges “all Americans to educate themselves about all forms of modern slavery and the signs and consequences of human trafficking.”

This month serves as an annual reminder that all people are called to participate in the fight against human trafficking.