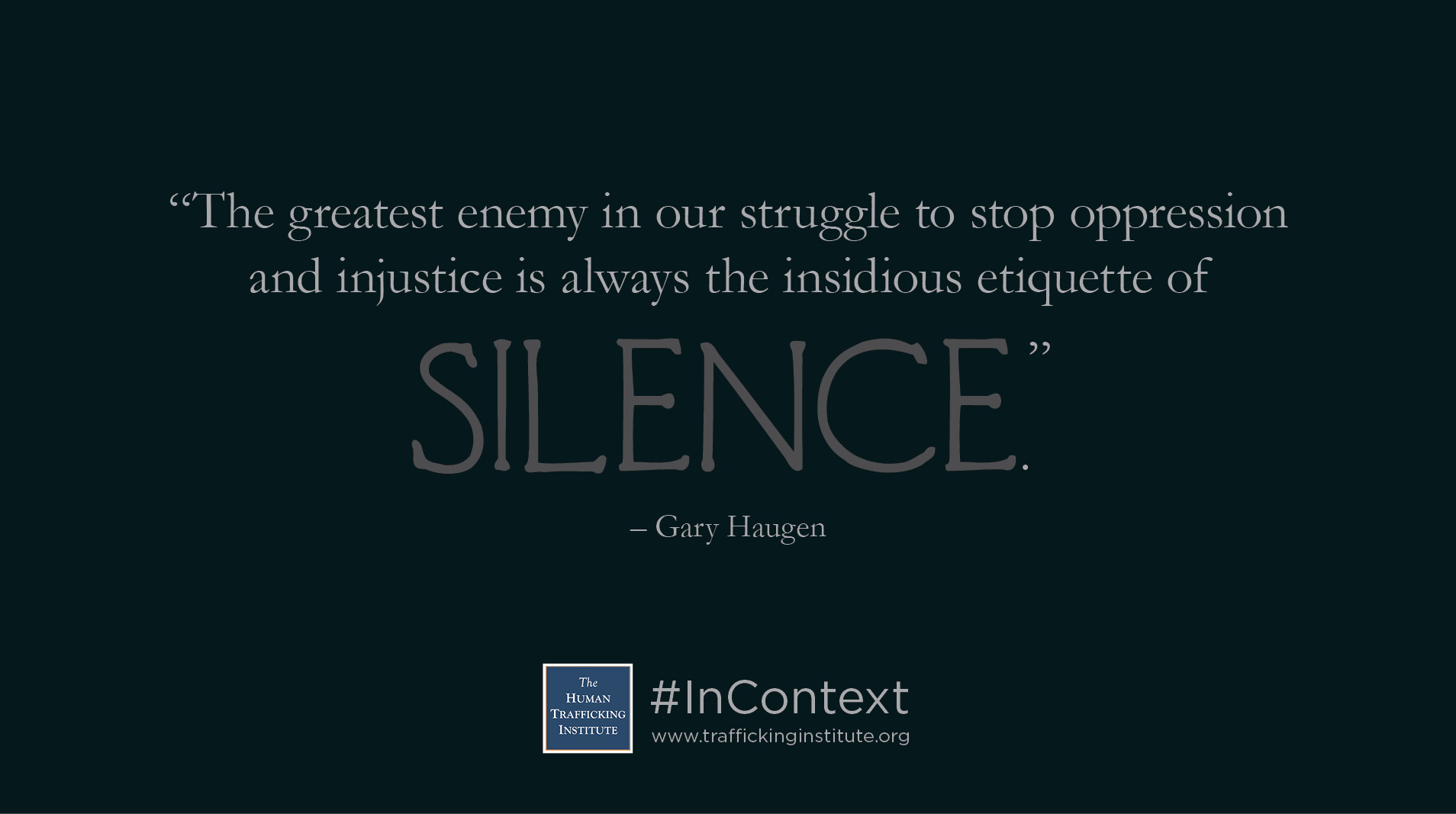 Reflecting on history, what is most perplexing and indefensible are “the simple failures of compassion.” In these failures, we watch societies experience the destruction that occurs when oppression and injustice reign unchecked. Oppressor replaces oppressor, free to persecute because individuals who have the ability to speak out remain silent. Perpetrators are emboldened to continue their violence and oppression when those with the power to help become bystanders, look the other way, or reject the idea that brutalities could happen in their own backyard. In his book, Terrify No More, Gary Haugen defines this complacency and inaction as the “insidious etiquette of silence.”

Preparing readers for stories that may be “more graphic than what [they] are used to,” the introduction of Terrify No More describes the importance of including explicit details. Haugen explains that

“any serious contest with evil requires a painful confrontation with the truth. The greatest and most shameful regrets of history are always about the truth we failed to tell, the evil we failed to name. The greatest enemy in our struggle to stop oppression and injustice is always the insidious etiquette of silence.”

Society’s perpetuation of the “etiquette of silence” and refusal to confront evil allows injustice to remain unnamed, thus permitting violence and oppression to continue unabated.

Haugen, a former attorney with the U.S. Department of Justice and former Director of the United Nations’ investigation of the Rwandan genocide, founded the International Justice Mission (IJM) in 1997. IJM operates worldwide fighting violence, slavery, and injustice. The organization focuses on restoring victims, bringing criminals to justice, and strengthening justice systems. Through both his previous work and operations with IJM, Haugen has seen the impact of numerous atrocities but nevertheless, he maintains hope for a world where justice and equality prevail.

In his books Terrify No More and The Locust Effect (co-authored by HTI CEO Victor Boutros), Haugen invites the reader onto the frontlines of the battle against injustice and violence through vivid portrayals of confrontations with evil. Readers travel around the world and face harrowing stories of abuse, inequality, and bondage, including accounts of children recovered from sex traffickers and families freed from forced labor at brick kilns. Then, Haugen provides his perspective on how to eradicate poverty and oppression—by ending violence through repairing broken and corrupt justice systems and properly enforcing laws.

Twenty years after he faced what he says was his “most powerful encounter with the reality of violence,” Haugen reflected on the silence and inaction contributing to the rise in everyday violence, including human trafficking, that continues to crush the poorest worldwide. He explained that, like those killed in Rwanda, the world’s poor “are calling out for protection from this everyday violence…and for the world to take notice of the nightmares unfolding in their communities, and they are getting neither.” Haugen’s sentiment, as it pertains to trafficking, was echoed by former United Nations Secretary-General Ban Ki-moon who stated “the scale of human trafficking is atrocious. The silence that conceals this crime is disgraceful . . . We have to raise our voices for them.”

Haugen shared his experiences and urged the world to take action during a TED Talk in 2015. There, he explained that the silence of previous generations caused children and grandchildren to ask where their ancestors were when atrocities transpired. Where were their parents and grandparents when Japanese Americans were marched to internment camps? When African American neighbors were beaten for simply trying to register to vote? Or when the Jews fled Nazi Germany only to be rejected from U.S. shores? Haugen cautioned that likewise our children and grandchildren will ask us where we were when two billion of the poorest and most vulnerable needed our help escaping violence and oppression. His plea is that “we can say that we had compassion, that we raised our voice, and as a generation, we were moved to make the violence stop.”

Concluding the introduction of Terrify No More, Haugen asks his readers to persevere through the discomfort caused by the stories. He encourages them to see that “in the pain, there is promise; in the hurting there is hope.” Indeed, even in confronting evil and “the dark world of injustice,” hope remains. When we resist oppression and become a voice for the voiceless, freedom is possible. Those who are oppressed can be empowered to pursue new lives and opportunities. But this requires individuals with the power and ability to speak up and stand with them. For the millions who are hurting and oppressed, we cannot and must not allow silence and fear to control. We must seek to end the “insidious etiquette of silence.”