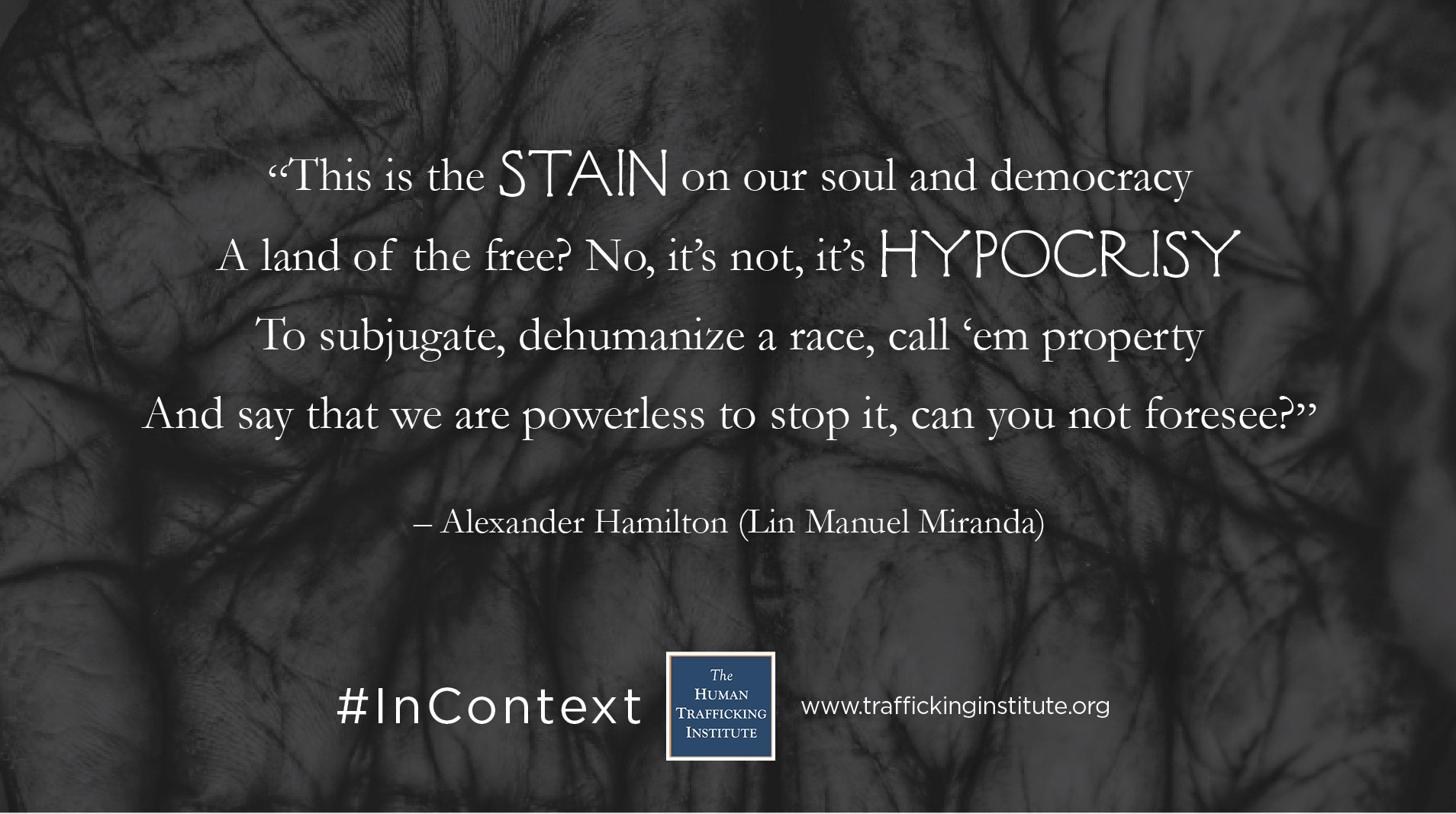 The hit musical Hamilton is a pop culture sensation that spotlights the Founding Fathers’ early decision for the nation—the good, the bad, and the ugly. The show skirts a bit around the slavery debate (Thomas Jefferson makes one nod to “Sally, dear,” referencing Sally Hemings), but creator Lin-Manuel Miranda addresses the slavery debate head-on in his later project “The Hamilton Mixtape.”

Lin-Manuel Miranda told NPR “it’s no accident that the initial name for my show was ‘The Hamilton Mixtape.” Miranda’s Grammy and Tony award-winning Hamilton focuses on the life of Founding Father Alexander Hamilton. Since the inception of the show, Miranda has maintained that Hamilton’s life “embodies hip-hop” (even saying so in a 2015 early performance at the White House of the opening number).

It was only fitting, then, that just over a year after the release of the original Broadway cast album in September 2015, Miranda released The Hamilton Mixtape in December 2016, a mixtape of reimagined and cut songs from the original musical.

One song on the mixtape that did not make the final cut is “Cabinet Battle #3,” which portrays a debate among Alexander Hamilton, Thomas Jefferson, and James Madison about the role of slavery in the budding nation. Miranda said it “is probably the cut song from Hamilton people have been most eager to hear.”

The imagined debate concerns a petition Benjamin Franklin sent to the first Congress in for the Quaker Delegation asking for the abolition of slavery and an end to the slave trade. The debate features Hamilton presenting impassioned abolitionist arguments against Jefferson’s pro-slavery argument and Madison’s insistence that the issue be tabled until 1808.

In a verse imagined from Hamilton’s point of view, he notes about slavery:

This is the stain on our soul and democracy

A land of the free? No, it’s not, it’s hypocrisy

And say that we are powerless to stop it, can you not foresee?

Madison’s insistence ultimately won out—the first Congress ultimately cited Article I Section 9 of the U.S. Constitution and concluded “[t]hat the General Government was expressly restrained from prohibiting the importation of such persons ‘as any of the States now existing shall think proper to admit, until the year 1808.’”

Now, historians have noted that artistic portrayals of the founding like those in Hamilton are a bit sanitized and simplistic. Miranda highlights Jefferson as the slave-holder of the show. Jefferson once said of slavery in a letter that “we have the wolf by the ear, and we can neither hold him, nor safely let him go.” The show capitalizes on Jefferson’s obstinate support of slavery. But Madison owned slaves; Washington owned slaves; and even Hamilton bought and sold slaves for his in-laws.

Miranda explained to Entertainment Weekly why he ultimately cut Cabinet Battle #3 and its discussion of the early slave trade from the full show: “[Y]ou just get to a point where you look at all these flawed, human characters, and they didn’t do anything. Nothing really happened on slavery until the Civil War a hundred years later.” Despite the robust imagined debate, Franklin’s petition to the first Congress did not result in the abolition of slavery.

One exchange from the song acknowledges the Founders’ decision paralysis regarding slavery and is particularly notable for modern anti-trafficking advocates. Jefferson, in arguing against abolition, says “we can’t address a question if we do not have an answer.” Hamilton, after an impassion plea for abolition, retorts “I don’t pretend to know the answer, but the question is real.”

Advocates today face a slew of challenges and questions, from how to conduct effective investigations and prosecutions to how to care for victims and survivors as we move forward. The Institute exists in part to provide resources and answers for the challenges and questions of the anti-trafficking movement—because fear of the questions can never slow progress. In the fight to decimate human trafficking, we must always press forward towards the goal of freedom—after all, history has its eyes on us.