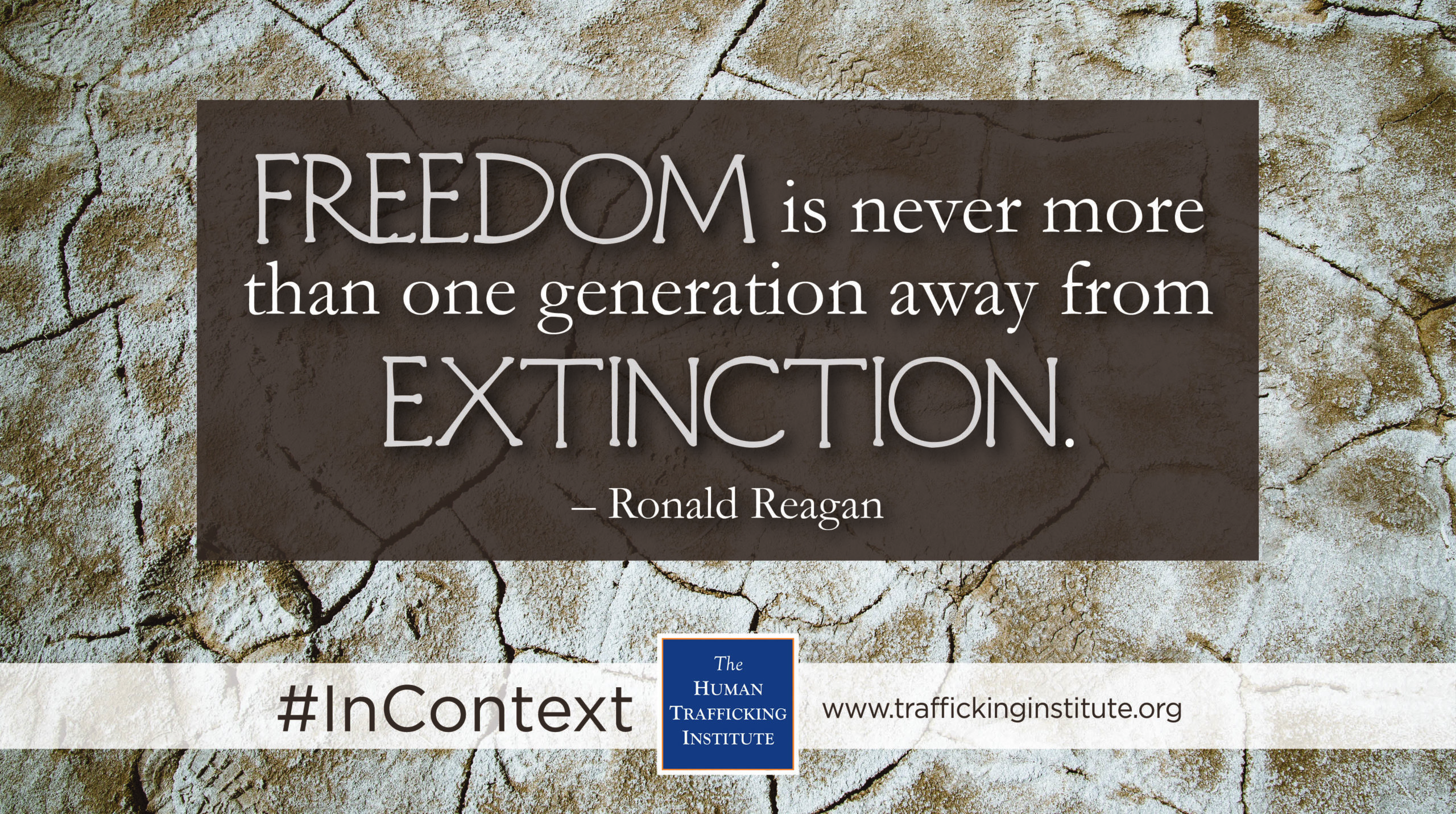 “Freedom is never more than one generation away from extinction,” said Ronald Reagan in a speech to the Phoenix Chamber of Commerce in 1961. “We didn’t pass it on to our children in the bloodstream. The only way they can inherit the freedom we have known, is if we fight for it, protect it, defend it, and then hand it to them to do the same.”

Here Ronald Reagan has in mind the freedom enjoyed by citizens of a republic. The United States operates under rule by the people, for the people. Today, living in a Western democracy, we are used to the idea that the government exists to meet our needs and allow us to control our individual destinies. Reagan reminded his audience how radical this idea was during the American Revolution, when the most common understanding of government was rule by the king, for the king, and the people were servants of the crown rather than citizens. There was a Declaration of Independence because the inalienable right of individual liberty was not obvious or automatic. It had to declared.

A government by the people for the people is still radical. It was radical when Reagan made his speech in the midst of the Cold War, when the communist idea of rule by the few for the few held sway in the Soviet Union. Reagan explicitly mentions Lenin’s writings, which describe an elite ruling cadre called “The Party” who carefully restrict membership and use the masses as they see fit.

It is radical today as dictators in certain parts of the world continue to operate on the tradition of “might makes right.” President Bashar Al-Assad seems to have little interest in the desires of the citizens of Aleppo, and more interest in setting himself up as their ruler, regardless of the costs.

Perhaps the most revolutionary aspect of the American Revolution is that it only happened once. In this 1961 speech, Reagan said, “Every other revolution simply exchanged one set of rulers for another set of rulers.” The inverse has also been true throughout history: that a change in rulers – if it involved a radical change in ideas – often required a revolution. Yet when George Washington’s second term ended, John Adams took office without a single battle being fought. And this peaceful change in power has occurred 44 times in United States history, from Democratic presidents to Republican presidents and back again, each administration stepping down in obedience to the majority vote, whether or not it approved of its replacement. Barring the Civil War and the occasional threat of secession, dissatisfied Americans have used the press and the protest and various peaceful modes of expression to change the nation from within, trusting that their freedoms are protected if they use the tools built into the system.

Reagan was just a politically active actor at the time of his speech to the Phoenix Chamber of Commerce. But he would become the governor of California and then the 40th president of the United States. He understood that every peaceful election was a small miracle. He goes out of his way to say so in his 1981 inaugural address:

“The orderly transfer of authority as called for in the Constitution routinely takes place, as it has for almost two centuries, and few of us stop to think how unique we really are. In the eyes of many in the world, this every four-year ceremony we accept as normal is nothing less than a miracle.”

He then goes on to directly thank President Jimmy Carter, a member of the opposing party, for making the orderly transfer possible:

“Mr. President, I want our fellow citizens to know how much you did to carry on this tradition. By your gracious cooperation in the transition process, you have shown a watching world that we are a united people pledged to maintaining a political system which guarantees individual liberty to a greater degree than any other, and I thank you and your people for all your help in maintaining the continuity which is the bulwark of our Republic.”

Freedom cannot be taken for granted. Even in the United States, the ideals of the government do not always play out in the lives of its citizens. Individuals who slip through the cracks of society’s safety net become vulnerable, and then the ancient tradition of “might makes right” takes over again. Young adults who age out of the foster system, children from broken homes who run away, and other uncared for Americans often become victims of human trafficking, their inalienable liberties stolen. The problem is even more dire in countries where law enforcement is poorly equipped to protect the people, so that anti-slavery laws remain unenforced and hardly have an effect at all.

By remaining aware, we can protect the freedoms we do have and pass them on to the next generation. Far from going extinct, we have the power to make freedom grow.