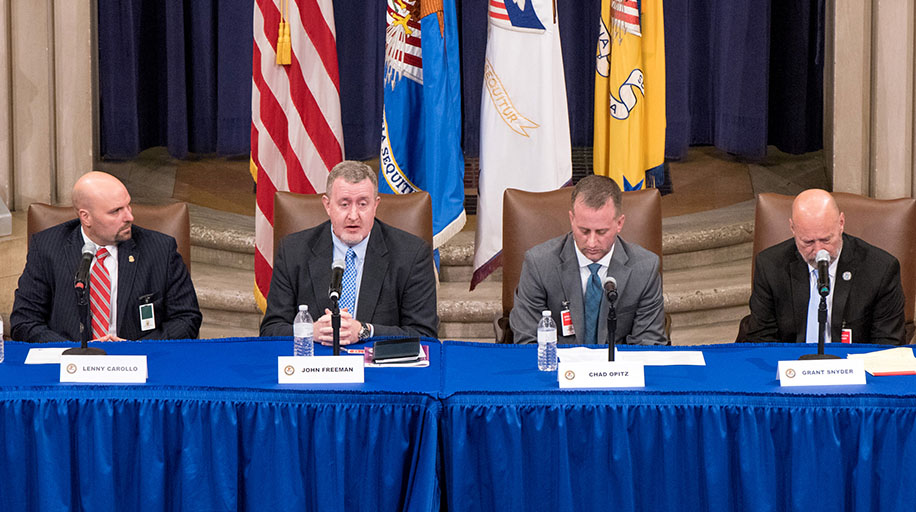 John Freeman joined the Institute as the new Director of Law Enforcement Operations on August 17. He brings 21 years of experience with the Diplomatic Security Service (DSS), U.S. Department of State, where he retired in July 2020.

John is replacing Dave Rogers, who has held this position since April 3, 2017.

“John brings so many gifts and talents to the Institute,” Dave said. “He is an expert in trafficking investigations and is very highly regarded by the anti-trafficking community. His experience working abroad sets him up perfectly to continue the strong relationships the Institute has established with our country partners. His expertise in investigations will enable the Institute to remain impactful with our law enforcement partners abroad, while simultaneously speaking with authority into trafficking matters in the U.S. I am excited to see how the Institute’s work will continue to flourish under his leadership.”

During Dave’s tenure with the Institute, he was instrumental in establishing agreements between the Institute and the Belize Police Department, the Supreme Court of Belize, and the Office of the Director of Public Prosecutions in Uganda in order to better equip each government office with the resources and skills needed to stop traffickers and free victims. He established strong relationships with civil society organizations in both Belize and Uganda, resulting in greater impact in both countries. The relationships Dave built with the police in Uganda ultimately led to the establishment of an agreement between the Institute and the Ugandan police in order to expand the Uganda Police Force’s capacity to investigate human trafficking cases. He was also instrumental in designing and tailoring training academies to maximize the impact of specialized units in Belize and Uganda.

Prior to joining the Institute, John was the first DSS Human Trafficking Investigations Coordinator and represented both his bureau and department in formulating national policy, expanding interagency task forces, and developing specialized anti-trafficking training. In this role, he also initiated investigations, including victim interviews, coordinated multi-leveled responses for sensitive cases, and supported numerous successful prosecutions. John facilitated investigations with many international law enforcement and NGO partners, and in recent years, was called on by multiple anti-trafficking NGOs for his participation in training seminars and conferences. This culminated when he was named a member of the U.S Delegation to the United Nations Convention Against Transnational Crime’s Working Group on Trafficking in Persons in 2019.

While serving as a Foreign Service special agent, John was posted to U.S. Embassies in Nigeria and South Korea, the first DSS representative to the Joint Terrorism Task Force – Seattle, Washington, and served on Secretary Condoleezza Rice’s Protection Detail. Prior to joining Diplomatic Security, John served in the U.S. Army.

“My path to anti-trafficking is slightly different than most, and while I feel so fortunate having worked with many of the best, both in the United States as well as partners overseas, I am overjoyed to continue my work alongside my new colleagues at the Human Trafficking Institute as we strive to decimate the scourge of human trafficking,” John said. “I specifically want to thank Dave Rogers for his partnership, and more importantly his friendship, in recommending me to take over from the great success he achieved in building the Institute’s law enforcement portfolio.”