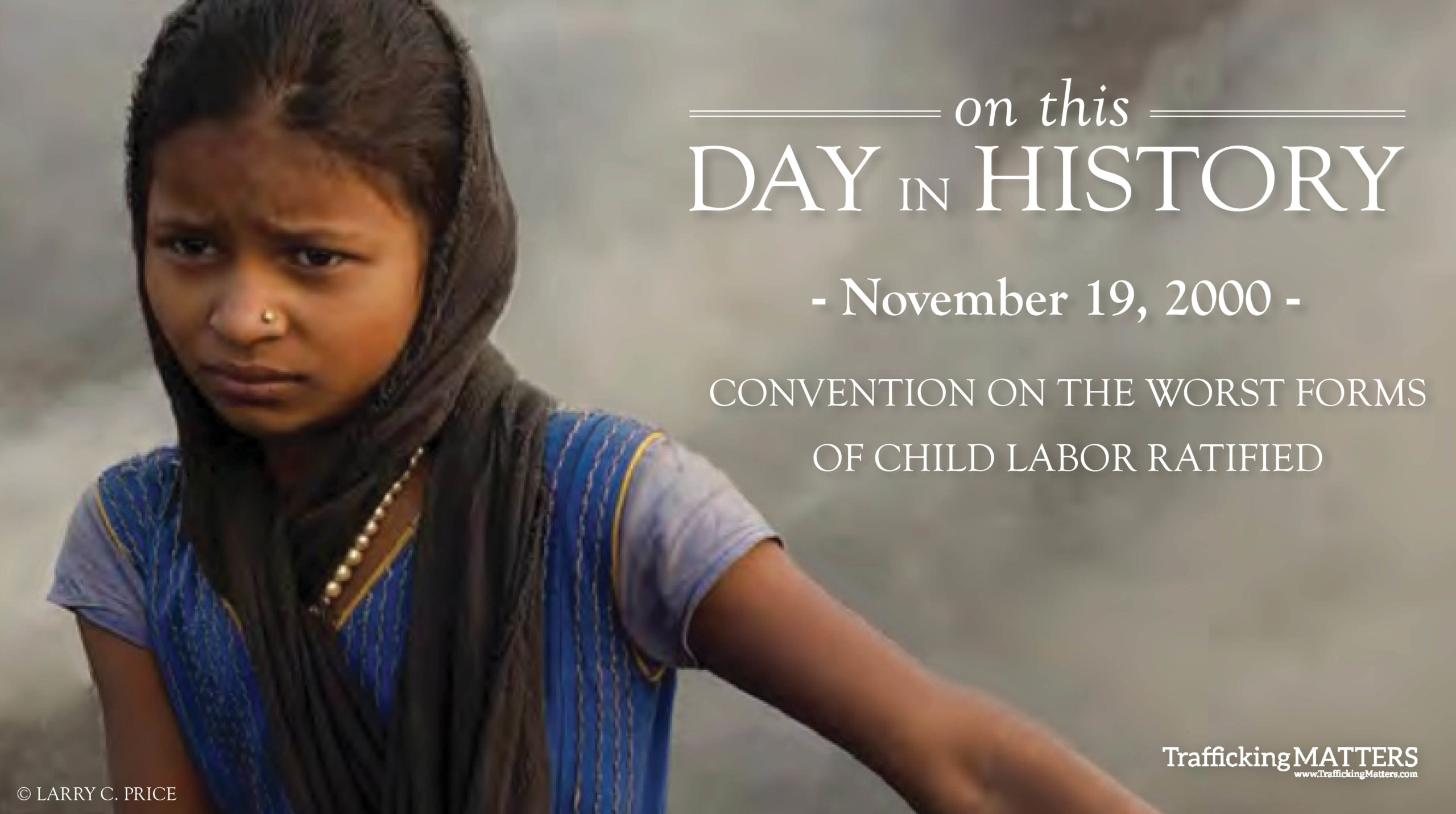 On This Day in History: Convention on the Worst Forms of Child Labor Ratified

Nineteen years ago today – November 19, 2000 – The International Labour Organization (ILO) Ratified the Worst Forms of Child Labor Convention in Geneva, Switzerland. The convention was a signal of international consensus; there should be an “immediate end” to the forced labor of the world’s most vulnerable population — children.

In 1919, more than 80 years prior to the ratification, the ILO was formed during the Paris Peace Conference to end World War I. The Treaty of Versailles — the Conference’s final document – included “Labor Provisions” detailing the organization’s creation.1 This inclusion was crucial for the treaty’s drafters, who believed “universal and lasting peace can be accomplished only if it is based on social justice.”2 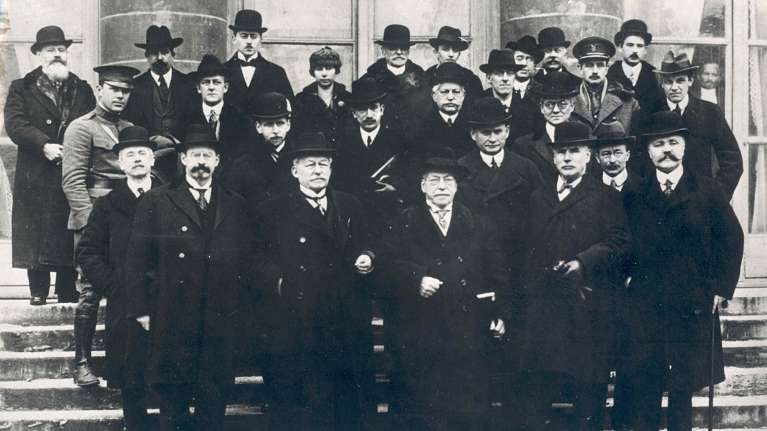 At its inception, nine nations formed the ILO — Belgium, Cuba, Czechoslovakia, France, Italy, Japan, Poland, the United Kingdom, and the United States. In the organization’s first two years, 10 recommendations were adopted including minimum age to work and standards for young persons under the age of 18 working at night.3

This agreement was significant. For the first time in history, there were established, international agreements on limits for child labor.

The Paris Peace Conference also gave birth to the League of Nations, the world’s first intergovernmental organization with the principle mission of maintaining peace. In 1924, the League of Nations’ 42 members decided to link arms with the ILO in their prioritization of childhood rights, adopting the Declaration of the Right of the Child. One of its chief declarations spoke specifically to the right of a child to be free from forced labor and exploitation, saying

“The child must be put in a position to earn a livelihood and must be protected against every form of exploitation.”4

Six years later, in 1930, the ILO convened to adopt proposals for that singular purpose: the eradication of forced labor,5 including the forced labor of children. Unfortunately, the momentum did not last. In 1939, World War II dispersed all hopes of peace talks, causing division among the nations in the ILO which had members on both sides of the war.

Then, in 1948, three years after the war’s end, the United Nations (UN) General Assembly made history with the passage of its Universal Declaration of Human Rights. For the first time, a standard for the rights of human beings was universally recognized.

In 1959, the UN General Assembly adopted the League of Nation’s previous Declaration of the Rights of a Child, affirming the global right for a child to be free from exploitation. Thirty years later, in 1989, the UN General Assembly took child rights one step further with the Convention on the Rights of the Child. The Convention quickly became (and is still today) the most widely ratified human rights treaty in history.6 The treaty granted children with four rights (now known as the “four P’s”):

Since the rights of children now had international recognition and agreement, the ILO set their sights on implementation. 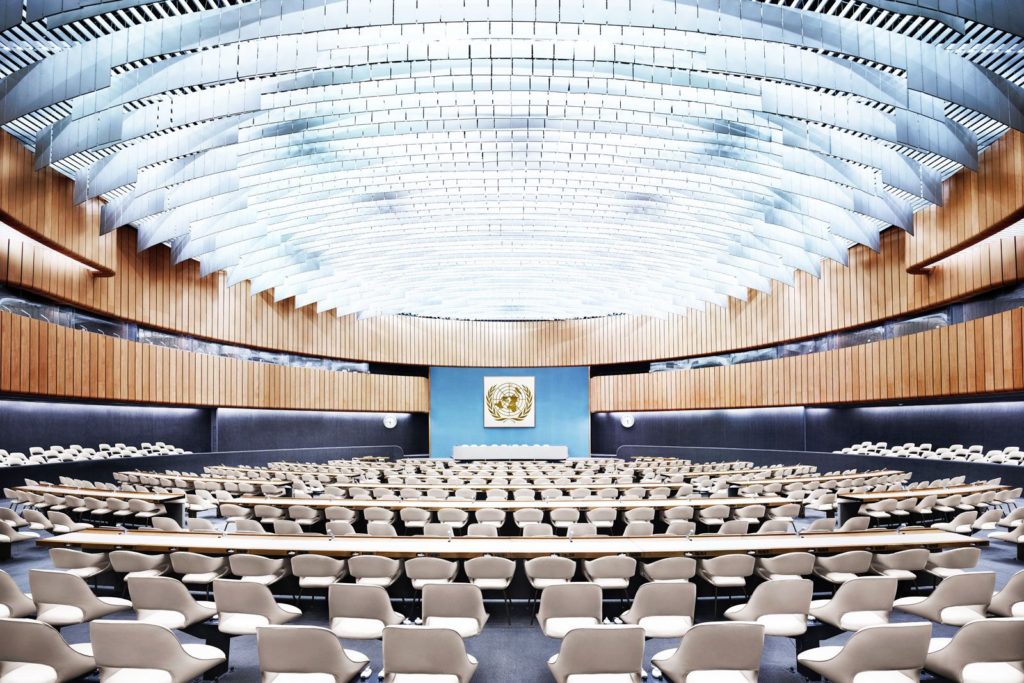 In June 1999, ILO members convened in Geneva, Switzerland, for the Worst Forms of Child Labor Convention. The “adopt[ion] of new instruments for the prohibition and elimination of the worst forms of child labor” was their main priority. Above all other international priorities, the ILO believed the eradication of child labor deserved the most immediate national and international action.”7

At the time, according to global estimates, more than 250 million children between the ages of five and 14 were forced to work to survive — more than 70% of those in hazardous conditions.8 With the goal in mind to prohibit and eliminate the worst forms of child labor, the Convention determined the following list of the most despicable forms of child labor, thereby requiring the most immediate attention:

By ratifying the document, each member nation agreed to take effective and time-bound measures to:

By October 2002, less than three years after its adoption, 132 countries had ratified the Convention — the fastest pace of any other ratification in the ILO’s 80-year history.10 Today, the Convention has been adopted by 18211 nations.12 And yet, according to the most recent global estimates, on any given day, 152 million children ages five to 17 are forced to work with 48% of those children performing hazardous work.13

According to the 2018 Findings on the Worst Forms of Child Labor, improvements are being made. Countries are developing or expanding their list of hazardous work prohibitions in line with international standards. By the end of 2018, more than 75% of evaluated countries had hazardous work lists that included sectors with proven evidence of child labor under dangerous conditions.14 Unfortunately, more than one-third of these countries still have not established a minimum age for work in line with international standards.

On this day in history, we acknowledge the foundation laid to ensure children around the world have basic rights; we affirm the belief children have a right to become adults in a safe environment, free of exploitation; and we support the work being done globally to ensure children can express these freedoms.