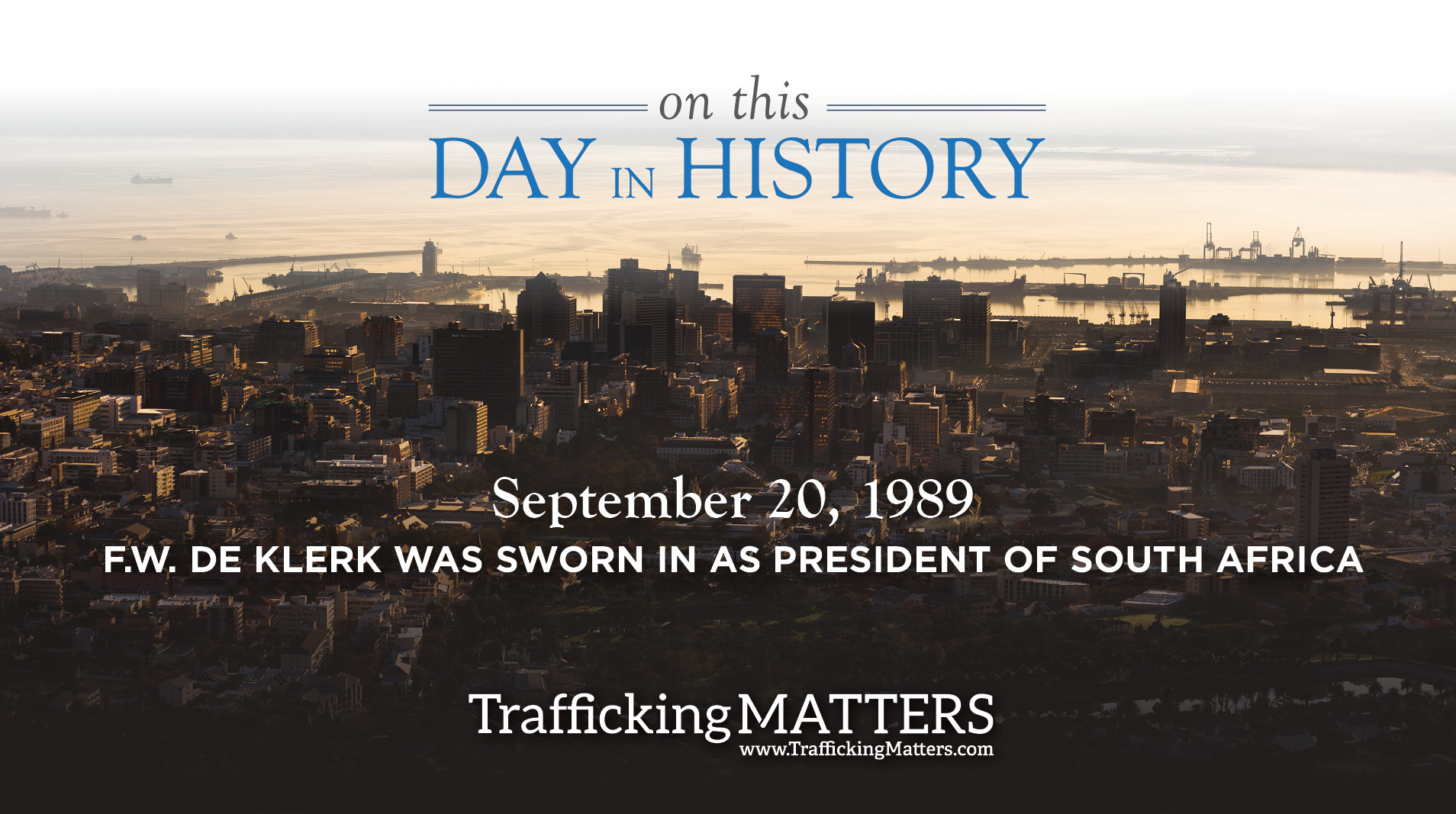 On This Day in History: F.W. de Klerk was Sworn in as President of South Africa 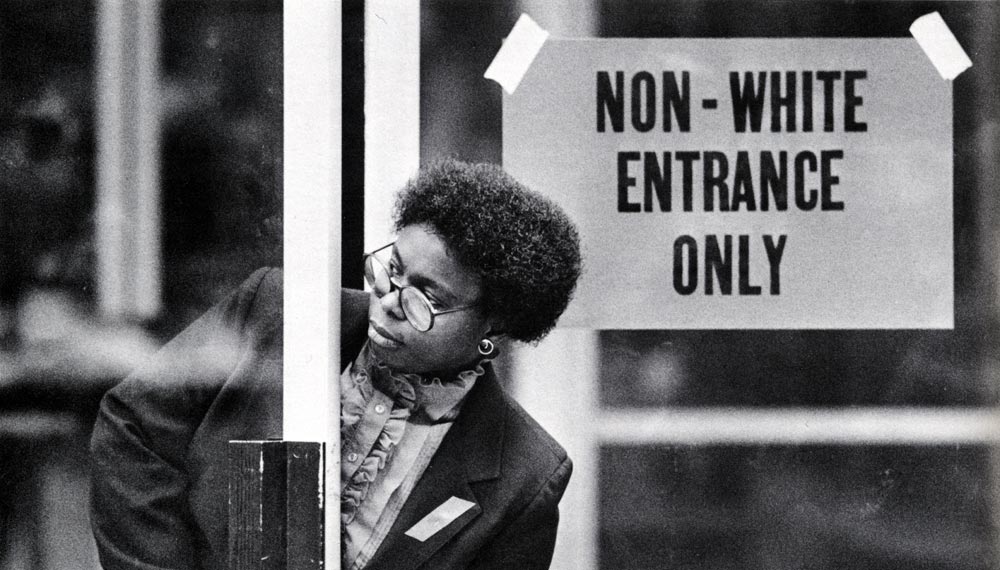 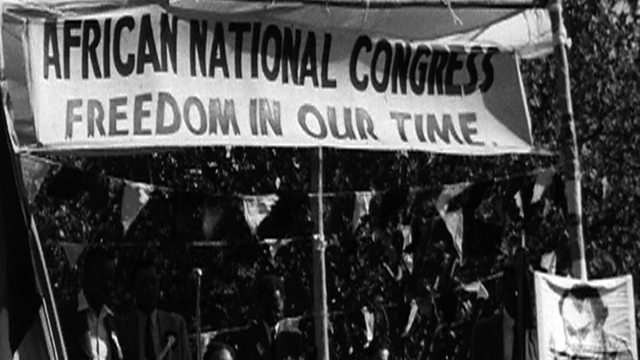 Opposition against the Nationalist Party and Botha continued to rise in intensity through the African National Congress’s (ANC) advocacy for rights of Black South Africans. The ANC, founded in 1912, was banned in the 1960s by the National Party and the struggles between the two groups became violent. Eleven years into Botha’s presidency, he became ill. After suffering a stroke, he named de Klerk the leader of the National Party, while still retaining the presidency. Botha became more ill, difficult, and forgetful until his own cabinet and the National Party forced him to resign. F.W. De Klerk became acting president of South Africa on August 15, 1989, and was elected president for a five-year term on September 14, 1989. He was sworn into the presidency on September 20, 1989, marking the beginning of a new South Africa.

There was nothing in de Klerk’s background that would have suggested he would reform the country. He served under Botha in various high-ranking positions and the National Party knew him as someone who sided with the verkrampte (an “unenlightened” National Party member who opposed liberal changes, such as reforming apartheid), although he considered himself moderate. However, de Klerk had already decided that he would be the one to end apartheid. He knew that apartheid wouldn’t last forever, and dictatorships all over the world such as the Soviet Union were collapsing. He believed it would be best to end the system of apartheid as quickly as possible, like “cutting off the tail of a dog in one fell swoop.”

After being elected president, he lifted the ban on protest marches as well as began to release political prisoners. He began negotiations with Black South African leaders, including the still imprisoned Nelson Mandela, avoiding a possible civil war. In an interview about his choice to end apartheid, F.W. de Klerk said:

“For many years I supported the concept of separate states. I believed it could bring justice for everyone, including the blacks who would determine their own lives inside their own states. But by the early 1980s, I had concluded this would not work and was leading to injustice and that the system had to change. I still believed, in 1990, that the independent states had a place, but in the end the ANC had put so much pressure on them that they didn’t want to go on.”

F.W. de Klerk took time during his 1989 Christmas vacation to discern how to unify South Africa and end apartheid. He says of this time that he had “long come to the realisation that we were involved in a downward spiral of increasing violence and we could not hang on indefinitely. We were involved in an armed struggle where there would be no winners. The key decision I had to take now, for myself, was whether to make a paradigm shift.” By the end of this vacation, he decided he needed to make the shift. His speech on February 2, 1990, and the freeing of Nelson Mandela, would make it a reality.

The speech preceding Mandela’s release shocked the entire world. De Klerk unbanned the ANC and other similar parties, released all political prisoners, and promised a future of democracy with rights for all citizens, Black and White alike. Nine days after de Klerk’s February 2 speech, Nelson Mandela was released after 27 years of imprisonment. 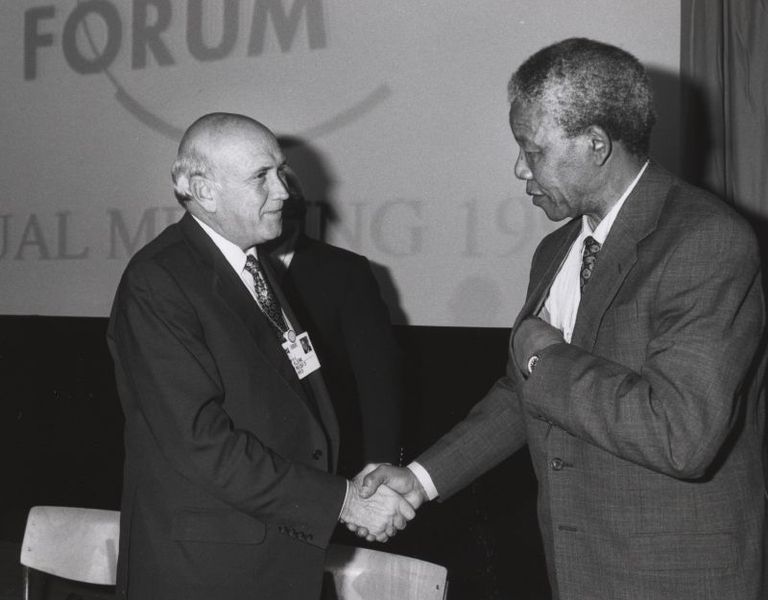 In 1993, F.W. de Klerk and Nelson Mandela were jointly awarded the Nobel Peace Prize “for their work for the peaceful termination of the apartheid regime, and for laying the foundations for a new democratic South Africa.” In 1994, South Africa held its first fully democratic election, and Nelson Mandela was elected as the first Black South African president. De Klerk joined Mandela’s government as second deputy president until resigning in 1996.

In retirement, de Klerk wrote his memoir in 1999, and formed the F.W. de Klerk Foundation in 2000 to promote peace, build relationships between communities in South Africa and support democracy. He currently helps manage the Global Leadership Fund from his home in Cape Town.

F.W. de Klerk’s country remembers him in different ways. He says he is “still branded a traitor by Afrikaners and an apartheid apologist by black South Africans.” Despite conflicting opinions about de Klerk and his imperfections, he is lauded for relinquishing his power to the voice of the people and letting justice reign in South Africa.