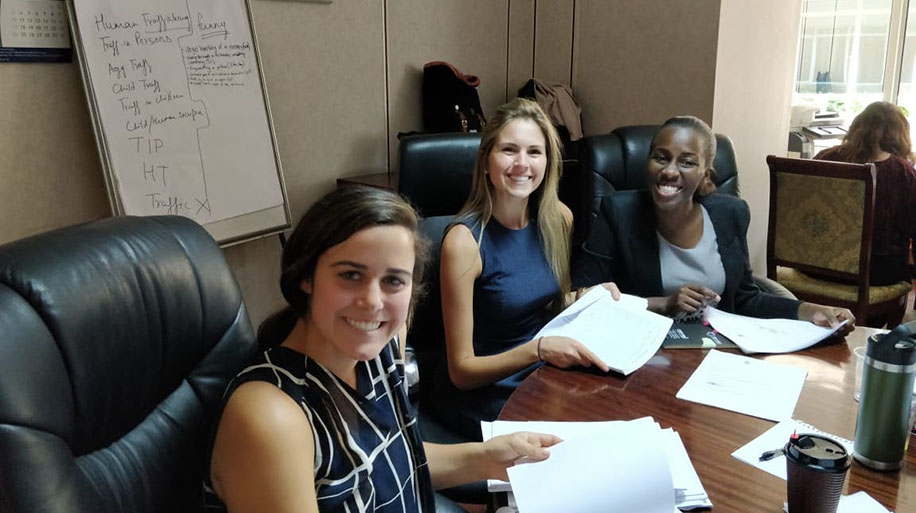 Reflecting on Uganda: Looking Away Cannot Be An Option

Uganda, to me, is a striking dichotomy: the richest land inhabited by some of the most impoverished people.

My thoughts flash to one particular excursion across the country as Tony, our van driver, skillfully swerved through an unending plethora of pot-holes. Across the rural countryside, “The Pearl of Africa’s” rich soil gives way to waves of hills toppled with vibrant trees, evidence of months of rain. Rusted tin, broken bricks, and dirt-stained, yellow and brown walls line the roads winding between the rolling shades of green. The battered structures sprinkle in between the tall leaves on the hillsides. Bikes are weighed down with pineapples and bananas, and bodas (small motorcycles) over-loaded with people and water jugs struggle against the incline of the road. Some women’s vibrant skirts dot the vast square meters of tea fields, Irish potatoes, and sugar cane; others’ glide amidst highways of commotion. Carrying heavy baskets of fruit and clothes on their head, these women embody strength. Despite the obvious hardships of such manual labor, I am in awe of the country’s beauty… but then we pass a refugee camp, which consists of a couple of rickety sheds with tarp roofs on a dusty plot of land. There’s nothing beautiful about that.

As the drive continues, my eyes stare in a daze out the window. The once brightly painted street signs advertising places like “Ooh Daddy, Chicken” and “Marria and Jesus’s Supermarket” are covered in a layer of unsettled dust that hovers and swirls above each dirt road in Uganda. In front of the humorously named enterprises, eyes stare back at mine, speechlessly imploring for costumers. The wheels of our van carry us further and further from the hustle and bustle of the main cities and towns. In parallel progression to the increasing mileage, these looks of desire are too frequently replaced by an almost empty hopelessness: too many days with too few customers. The short hand ticks hours off the clock. Our seats rattle in response to the uneven road. And, the faces steadily blur together in my mind, triggering a feeling of the undermining power of statistics. With an estimated 10 million living in poverty, a third of all Ugandans’ daily food intake is considered “unacceptable.” I am overwhelmed by the magnitude of disparity, and I fall victim to this contagion of disparity. My reflexive instinct is to turn my face away.

The next weekend, Tanima Kishore, the Institute’s Special Counsel to the Director of Public Prosecutions and my close friend/boss throughout my internship, planned a weekend excursion to Sipi Falls, a town centered around three magnificent waterfalls guarding volcanic caves and double rainbows. With a few hours to spare before our journey back to Kampala, I jogged through the town and even though the “muzungu out for exercise” was quite the morning entertainment, I was enchanted by the serenity of the village. Waterfalls painted the backdrop for my outdoor treadmill, and the canopy before me opened into what seemed like an oasis. I am obsessed with this place, with these mountains, with these waterfalls, and the smell of coffee that has now infiltrated every article of clothing I own. Then, upon my return, Tanima told me this town is a major center for trafficking. Traffickers bring victims here to cross into Kenya.

In view of my surroundings, I continually oscillate between being enamored and filled with sorrow. Oftentimes, I regret to recall how I have turned a blind eye to struggles around me like I did that day in Tony’s van. Where trafficking is considered, ignoring the crime can be a completely passive task. Turning our heads is not even necessary when most victims are harbored away from the public eye. Trafficking crimes must be sought out. One must be intentional to see them. A holistic understanding of this strange dichotomy of a country requires inviting a painful understanding of the impending struggles that travel with each rolling hill rather than focusing simply on the breathtaking beauty. Advocates for justice such as members of the Human Trafficking Institute’s team tackle this issue head on by venturing into some of the darkest situations and fighting for those whose cases could so easily be overlooked or even ignored.

The estimated number of trafficking victims in the world today is an ominous 24.9 million victims. Remembering that underneath that harrowing number lies 24.9 million individual stories means that even if we cannot immediately eradicate this crime from the globe, we can begin by stopping one perpetrator at a time and demanding justice in every case that comes forward.

My time with the Institute in Kampala, Uganda, allowed me to see Tanima strive towards this goal by daily fighting for those whose agency has been torn from them. She maintains a hopeful yet balanced perspective of the tainted beauty surrounding her and encourages prosecutors to pursue thorough convictions. With each Director of Police and government official who endearingly became “my brother” or “my sister” to Dave Rogers, the Institute’s Director of Law Enforcement Operations, I saw people impassioned and empowered to demand that justice be served. Meetings like Founding Director Victor Boutros’ briefing to the Prime Minister gave me hope that maybe one day this nation will no longer represent a dichotomy. As NGOs and non-profits, like the Institute, and Ugandan officials persevere in the struggle against trafficking, I am reminded that looking away cannot be an option.