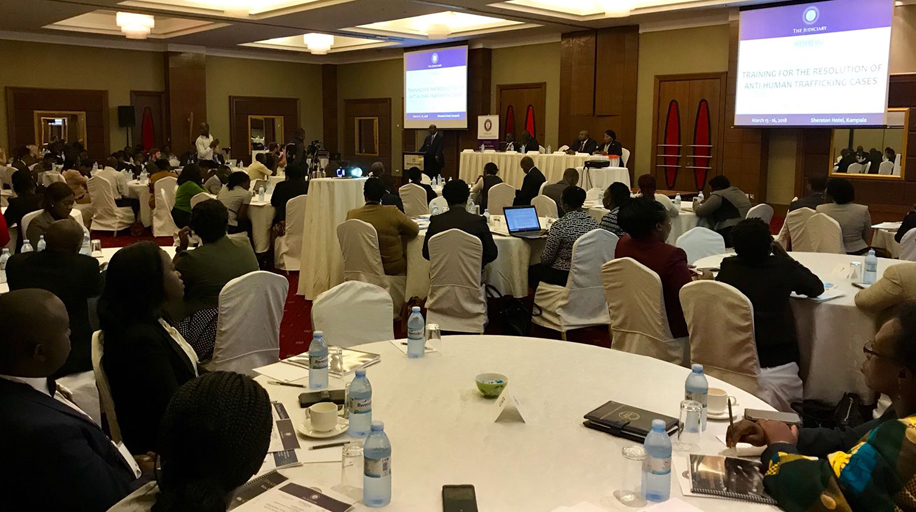 There is reason for continued optimism in the fight against human trafficking in Uganda. The Honorable The Chief Justice of Uganda Bart M. Katureebe called together more than 140 high-level judicial officers, prosecutors, law enforcement, and other leaders for a two-day Trafficking in Persons (TIP) training on March 15-16, in Kampala. The Human Trafficking Institute co-hosted the training along with the Judiciary of Uganda, Pepperdine University, and Willow International.

The Institute’s John Richmond, Dave Rogers, and Tanima Kishore spoke to the judicial professionals on knowledge and management of TIP cases. Two international judges also provided expertise: Justice Antoinette Moore of the Belize Supreme Court, Designated Belize Trafficking in Persons Justice, and Judge Stacy Boulware Eurie from the Superior Court of California, Country of Sacramento. They addressed how judges can best approach trafficking victims who may be dealing with trauma.

As Justice David Batemwa of Uganda stated, “The priority is the safety and protection of the victim. Ensuring safety and confidentiality in our courts is still wanting.”

The training comes in the wake of significant developments in Uganda’s anti-trafficking efforts. Justice Mike Chibita, Ugandan Director of Public Prosecutions, recently named Rachel Bikhole as the country’s Designated TIP Prosecutor. Bikhole presented at the training along with Justice Chibita.

Click here to read local media coverage in New Vision about the training.