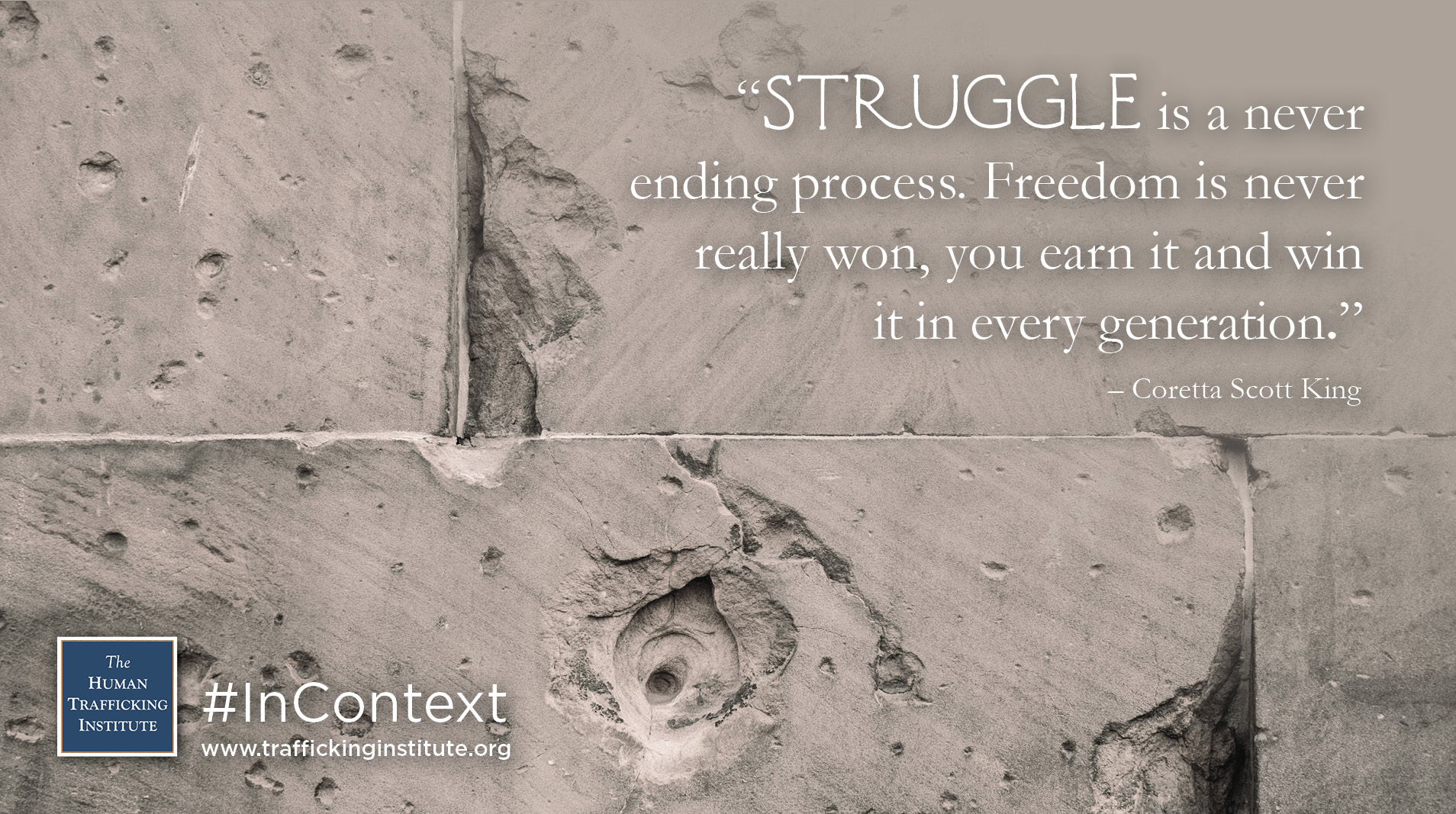 Although best known for being the wife of famed civil rights leader, Dr. Martin Luther King, Jr., Coretta Scott King created her own legacy in the movement to end injustice as well as working to continue her husband’s legacy after his death.

Coretta Scott was born in Marion, Alabama, on April 27, 1927. Her parents were both entrepreneurs, and her mother was musically talented. As a child, King expressed interest in music and quickly excelled in elementary school as the lead in the choir. She was the valedictorian in high school and went on to receive her BA in music from Antioch College in Yellow Springs, Ohio. She was awarded a scholarship to continue her music studies at the New England Conservatory of Music in Boston, Massachusetts. While studying at the school, she was introduced to Martin Luther King, Jr., a doctoral student at the time. The two began to date in 1951 and married in 1953.

One year later, Coretta King graduated from the Conservatory of Music and the couple moved to Montgomery, Alabama. Dr. King took a position as the pastor of Dexter Avenue Baptist Church, which eventually became the center for the Civil Rights Movement, first in Alabama, and then nationally. Due to her family’s participation in the Civil Rights Movement, the Kings often received death threats. As a result, the couple’s house was a continuous target for white supremacist groups. Throughout her marriage, King appeared side by side with her husband fighting against injustice, while simultaneously raising four children, much of the time alone due to her husband’s travel.

When Dr. Martin Luther King, Jr. was assassinated on April 4, 1968, in Memphis, Tennessee, Coretta Scott King carried on his legacy by continuing to support the causes he championed, even marching in a labor strike only days after his funeral. She expressed open disdain for the Vietnam War, causing her to be placed undergo FBI surveillance for several years. She also supported several women’s rights causes and often traveled abroad, lecturing widely about racism and economic issues. In 1969, she published her memoirs, entitled My Life with Martin Luther King Jr., detailing her life as a musician, civil rights activist, and wife of prominent public figure. She writes,

“Struggle is a never ending process. Freedom is never really won, you earn it and win it in every generation.”

King recognized that we must always strive for something better in order to fight against the inequality and injustice that exists in our world.

Later in her life, Coretta King established the King Center, a memorial and resource center focused on protecting and advancing her husband’s legacy. Her hard work eventually materialized in the form of a federal holiday in honor of Dr. Martin Luther King, Jr., which was signed into law in 1983. Although she later passed the leadership of the King Center to her son Dexter, she remained an integral part of the organization, accepting speaking engagements and making appearances until her death. King died on January 30 , 2006, from complications due to ovarian cancer. Her funeral was attended by several U.S. presidents and heads of state, who expressed their sadness in losing another prominent figure in the fight for equality. She is buried alongside her husband in Atlanta, Georgia.

Scott King’s activism did not simply uphold her husband’s legacy but expanded it. She understood the need for community and peace, and fought for both until the end of her life. Following in her footsteps, we strive to fight against injustice and inequality every day. Amidst victory and defeat, we vow to never give up hoping for a better tomorrow.