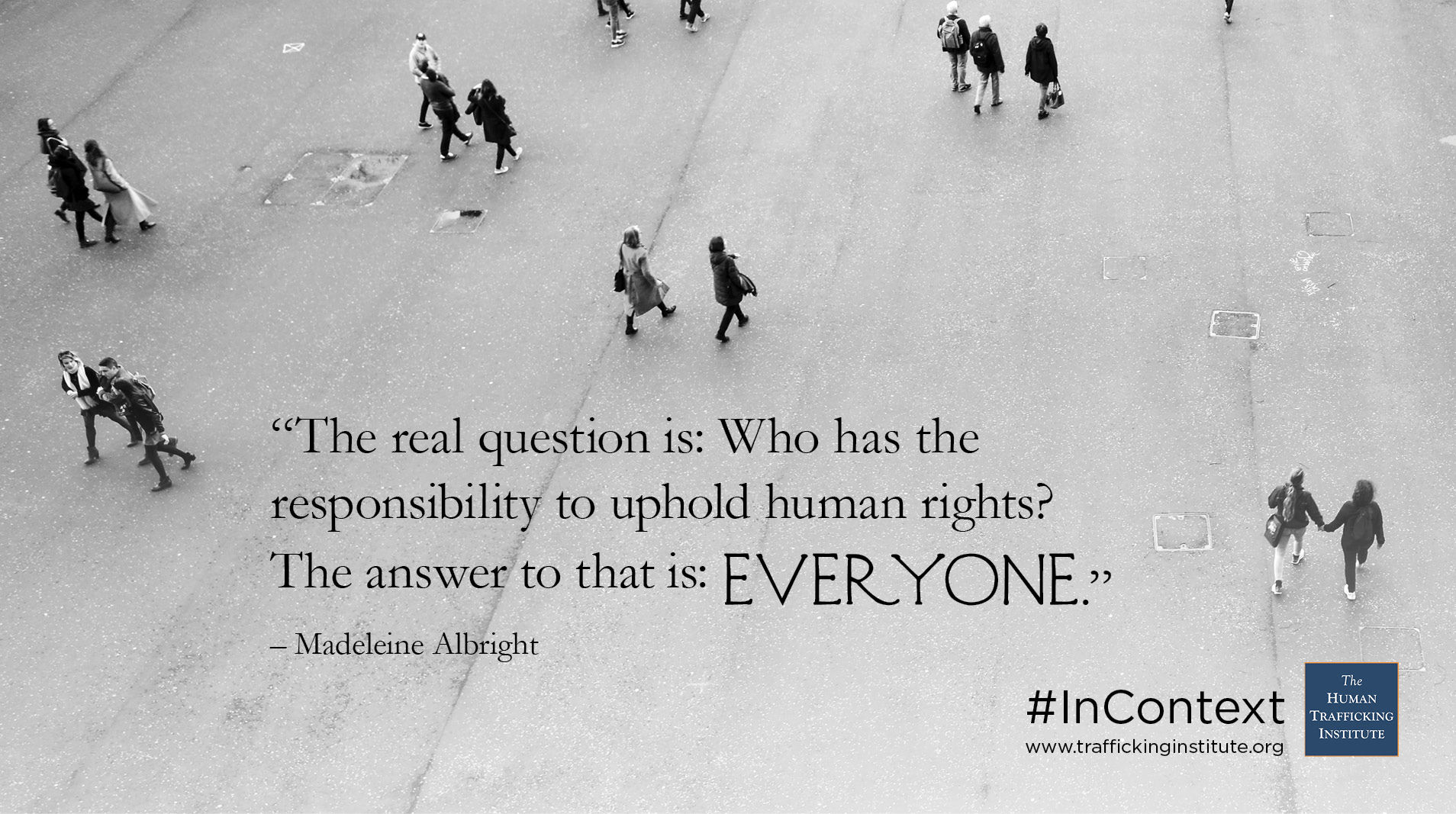 By the time Madeleine Albright was a teenager, she had escaped fascism twice. When she was almost two years old, her family fled from the Nazi invasion of Czechoslovakia by going to the United Kingdom. After the war, they returned home. However, in 1948, the family was forced to uproot their life for a second time in the wake of a Soviet-sponsored communist coup. They found refuge in the United States, where Albright would go on to become the first female Secretary of State and, at the time, the highest ranked woman in U.S. government history.

Albright knows better than most both the efforts necessary to protect individuals from governmental abuse and the power of the government to protect against systemic violence. Once, at a naturalization ceremony, a man told her, “Only in America can a refugee meet the Secretary of State.” She replied, “Only in America can a refugee become the Secretary of State.”

Confirmed unanimously in 1996, Albright would use her position in the Clinton administration to champion women’s rights, advance the Kyoto Protocol to fight against climate change, and strengthen the North American Treaty Organization. As Secretary of State during the Balkan civil wars, her involvement with the Kosovo conflict and her efforts to cease the ethnic cleansing of Albanians would lead to some calling it “Madeleine’s War.” This work was more than a professional achievement; in her confirmation process, Albright learned her family had hidden their Jewish faith throughout World War II, making the protection of the vulnerable intensely personal to the first female Secretary of State. Since leaving that post, Albright has served as a professor, formed an international strategy group, and headed a variety of charitable foundations. Put differently, she has continued to use her voice to fight for those who need it.

In 2018, Albright heralded an alert in her book, Fascism: A Warning, where she defines a fascist as, “someone who claims to speak for a whole nation or group, is utterly unconcerned with the rights of others, and is willing to use violence and whatever other means are necessary to achieve the goals he or she might have.” She notes in her book that the 20th Century was defined by the clashes of democracy and fascist governments, and as a powerful stateswoman, she watched the retreats from democratic governance in 2016 with alarm. Her book serves as a manifesto for those worried about the state of freedom in the 21st Century. In it, she reinforces Hannah Arendt’s thesis on the banality of evil by reminding her readers:

“The real question is: Who has the responsibility to uphold human rights? The answer to that is: Everyone.”

While Albright was referring to the importance of upholding fair and free governments, her sentiment extends further. Three years ago, former Douglass Fellow Brittany Davis noted in her profile of Albright that, “If we all spoke against injustices and for those whose voices are impeded, real change can happen and lives can be changed forever.” This is true not just of democracy, but human rights. In one of the last interviews in her official capacity as Secretary of State, Albright acknowledged the growing scourge of sex trafficking. Throughout her career, Albright has brought attention to human trafficking and emphasized the importance of active involvement in improving the rights of people across the world. Twenty years after that interview, trafficking continues to rise. The call to action remains.